Friday's close is a new year-to-date daily, weekly, and monthly closing low and leaves the index down -24.77% thus far in 2022. We now have the luxury of hindsight, and the summertime rally off the June lows was indeed a "bear market rally".

The S&P 500 has now declined three weeks in a row, falling -11.84% in the process. That's the largest three-week decline since March of 2020, eclipsing this past June's three-week plunge of -11.63%. The index is also down six of the last seven weeks, with all six of those weekly declines being -1% or more. We saw that happen in May of this year too, but prior to that we hadn't seen it happen since June of 2002. The persistent selling pressure we've witnessed thus far in 2022 isn't unprecedented, but it's definitely rare.

So if the "double bottom" story got off to a good start last Friday, it took a turn for the worse this Friday. Friday's decline of -1.51% leaves the index hanging on by a thread. All week long the S&P 500 seemed to be clinging to June's lows, but by Friday the index lost virtually all of its grip. Note on the chart below how the price of the S&P 500 has slipped below the shaded yellow region. 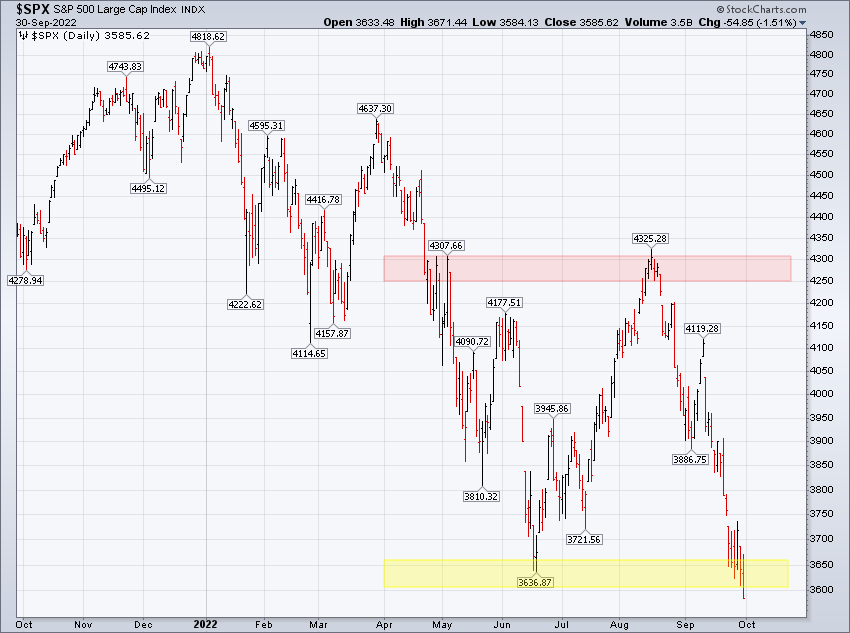 Now, if you've read our commentary long enough you'll know that Friday's price action does not mean the S&P 500 has broken down and that the "double bottom" story is over.

Whipsaws are far too common for Friday's move to a slightly lower low beneath a previous level of support to truly be viewed as a confirmed breakdown. We're huge proponents of both the 3% rule and the 4-day rule to quantify whether the S&P 500 has truly lost all of its grip (i.e., whether the index has truly broken down).

The concept here is that the price action at and around widely followed levels of support and/or resistance is almost always tricky.

Widely followed levels of critical support and/or resistance bring ascending transactions between buyers and sellers, which is analogous to a rush of more and more people joining a tug-of-war.

As more players rush to the sell side of the rope, more players rush to the buy side of the rope too. They wrestle, wrangle, and pull the rope back and forth above and below the binary level of support and/or resistance. Eventually one side wins, but it's usually not before it appears that the other side is going to win! In other words, right now it seems all but guaranteed that the S&P 500 is going to continue to plunge and breakdown and the sell side of the rope is in command. But maybe the buy side of the tug-of-war will have the last laugh. Our main point here is the "double bottom" story didn't end this week - but it's probably next week where the "double bottom" story writes its final chapter. Whether it's a happy or sour ending is what's yet to be determined.

Dating back to 1950, this has only occurred nine other times. The last time it occurred was in mid-March of 2020 and the S&P 500 would go on to crash shortly thereafter, analogous to the index totally losing its grip over the coming weeks and finding itself in free fall. However, eight of nine instances saw the S&P 500 close higher 12 weeks out, the one loser was a decline of just -1.47%, and five of nine marked the bottom for the next twelve weeks for the index.

Maybe, just maybe, a lasting bottom is in our near future. As always, there is nothing predictive about the table below, but it serves as a great reminder that we're currently in a boom or bust situation. Too many believe we're only in a bust situation.

Ten of the eleven sectors within the S&P 500 closed in the red this week. The lone winner was the energy sector, which gained 2.19% for the week. The biggest loser this week was the utilities sector, which has been the second best performing sector thus far in 2022. Utilities plunged -8.71% this week, the eighth largest weekly decline for the utilities sector since its inception.

For the week ahead, we have a ton of market-moving economic data being released. From manufacturing data on Monday (PMI and ISM) to jobs data on Wednesday and Friday, we'll get a glimpse into the state of the economy. Given the S&P 500's recent collapse, one would assume the market is pricing in a "worse than expected" outcome forward-looking. If the data comes in better than expected, perhaps a relief rally will finally get underway. With the S&P 500 finishing last week below its lower weekly Bollinger band and the VIX finishing last week right next to its upper Bollinger band, the ingredients are there for an explosive week one way or the other.

The index also finished September down -24.77% on a year-to-date basis.

With the S&P 500 closing Friday at new 52-week daily, weekly, and monthly closing lows, the primary trend is labeled as down across any and all time frames.

During downtrends, long-term investors are best served playing it safe and trying to hedge against the "left tail" (i.e., doing what they can to minimize what's lost in the event the worst-case scenario presents itself). While this decision in and of itself is riddled with risk, we firmly believe it's better to skew toward losing opportunity rather than money when the primary trend is down. Opportunities are endless, but money is not, and losing money is a killer to one's ability to adhere to their long-term investing plan.

The S&P 500 has now given back more than 50% of its COVID advance. There's a bullseye on the monthly chart at the 3.200-3,400 region given the idea that old resistance often becomes new support and ~3,200 represents the pre-COVID highs. 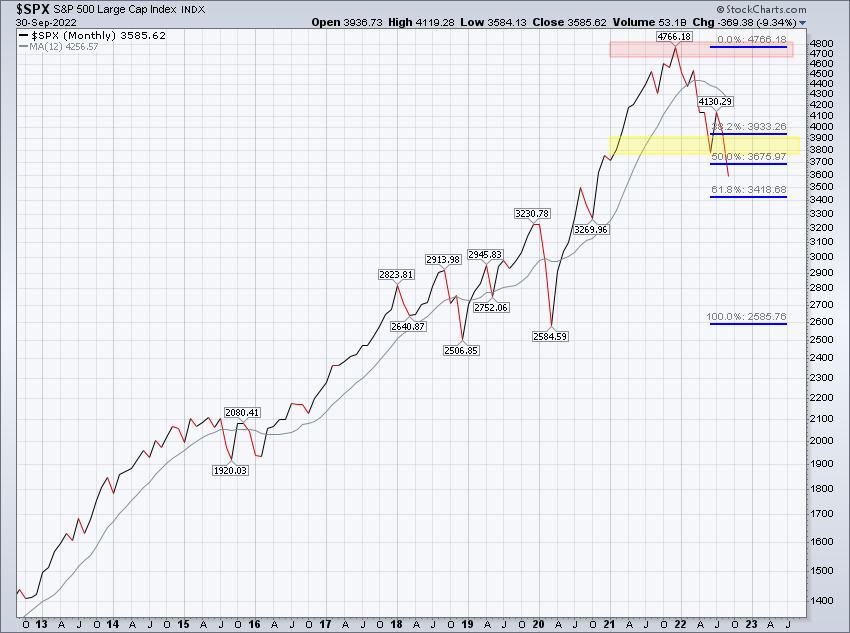 Wayne Whaley shared an interesting nugget in his update this weekend as he looked at how often each calendar month has marked the year-to-date low for the S&P 500. Since 1950, October has marked a calendar year's low seven times, but interestingly all seven times were down or negative calendar years for the S&P 500. The next closest calendar month in marking yearly lows is December with four. Maybe, just maybe, another October bottom is in store. We continue to believe the inflation story holds all the cards. We need all the disinflation, and some deflation, to get the party started. A headline like "Consumer Prices Declined in September" would help do the trick

Again, it's easy to think we're in a total bust situation, like there is no chance a lasting bottom is coming any time soon. However, prior calendar years that have started equally as awful and undoubtedly felt the same way have shown more boom than bust on a forward-looking basis.

The table below shows all calendar years where the S&P 500 was down -20% or more on a year-to-date basis through September's monthly close. The boom or bust scorecard would be 3-2 in favor of the booms. In other words, three of the five times the S&P 500 was down -20% year-to-date through September's monthly close the index boomed and never looked back. The two other instances were clearly the busts.

As always, nobody truly knows what lies ahead. Anything is always possible. The best antidote to managing the uncertainty and unpredictability across all asset classes is the certainty and predictability in a good long-term investing plan.

If you can behave (with good behavior being defined as your ability to stick to your plan even when getting punched in the face...a Mike Tyson quote), then you're going to win out in the long run...no matter how bleak things feel in the short term.

One of the biggest story lines of 2022 is the simultaneous drubbing of both stocks and bonds.

Over the last twelve months, the S&P 500 Total Return Index is down -15.47% and the iShares Core U.S. Aggregate Bond ETF (ticker symbol AGG) is down -14.47%. A "bear market" in bonds is undoubtedly playing a role in leading a "bear market" in stocks. It's no surprise that bond prices have plunged the last two months, fueling the sell-off in stocks.

As bond prices plunge interest rates skyrocket, and that's what has happened the last two months. Consider what happened across the yield curve in September:

Skyrocketing interest rates are a headwind to equity valuations and operate as a tax on consumers.

As an example, mortgage rates crossed 7% this week! On a relative basis, fixed-rate mortgages have arguably never been more unattractive given the economic landscape. All of this begs the question...when will bonds find a bottom (i.e., when will interest rates stop rising)?

The answer probably lies in thinking about when inflation will disinflate, when the U.S. dollar will stop its roaring uptrend, and when the Federal Reserve will pivot toward "dovish". All of these variables are unfavorable at the moment, but we believe they will become more favorable in 2023. This is why we believe stocks and bonds are holdings hands right now, meaning we need to see a lasting bottom in bonds first before we can truly see a lasting bottom in stocks. Hopefully that's coming sooner rather than later.

The monthly chart of AGG appears to have support in the mid-90s. AGG has been down eight of the last ten months. It's imperative AGG finds eager buying interest, and soon, for the S&P 500's "double bottom" story to have a happy ending. 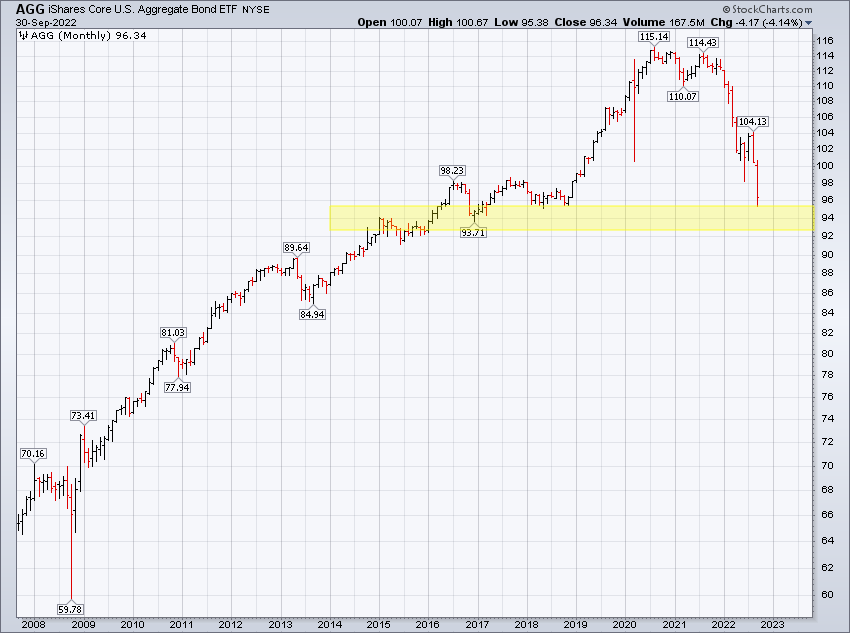