Importantly, it's now just 2nd-and-goal from the 1-yard line.  It's not as if the bears got a sack, forced a fumble, or the bulls lost 5 yards on a false start this week.  While there was a -1.96% decline from Thursday's high, we're only talking about a weekly decline of -0.28%.  Things will get a lot more interesting in the event the bears get another stop on 2nd down, analogous to the S&P 500 trading down and closing lower over the week ahead.  However, the S&P 500 at least remains in position to score as we enter the final week of July. 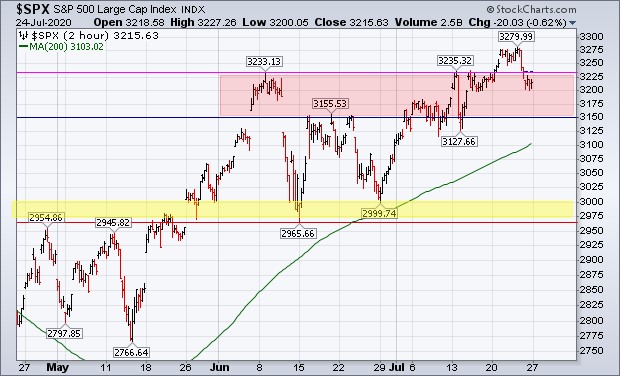 This week's decline was mostly attributable to the technology sector again finding selling pressure.  The Nasdaq Composite (COMPQ) traded up to a new all-time high at 10,839.93 on Tuesday, only to then fall -4.39% into Friday's close at 10,363.18, finishing with a weekly decline of -1.33%.  COMPQ nearly recorded its second consecutive "bearish outside reversal week", something we've never seen before in the history of the index.

We wrote last week that we believed COMPQ's weakness would be temporary, and that the technology sector would find its footing over the weeks ahead.  That certainly didn't unfold this past week, however COMPQ managed to end the week right on plausible "support" via its 20-day simple moving average (20MA).

The 20MA has marked the end of pullbacks for COMPQ since March (yellow highlights below).  While the 20MA contains no predictive qualities regarding the price of COMPQ, it is an objective price level that's the same for all market participants, thus it's plausible we see participants act accordingly (eager buyers buy, eager sellers cover i.e. buy, and prices reverse to the north).

We'll hear from Apple (AAPL), Alphabet/Google (GOOGL), Facebook (FB) and Amazon (AMZN) this week, so there are plenty of "technology" catalysts over the week ahead (although AMZN and FB aren't in the technology sector).  Naturally, we think the S&P 500 will go as COMPQ goes this week. 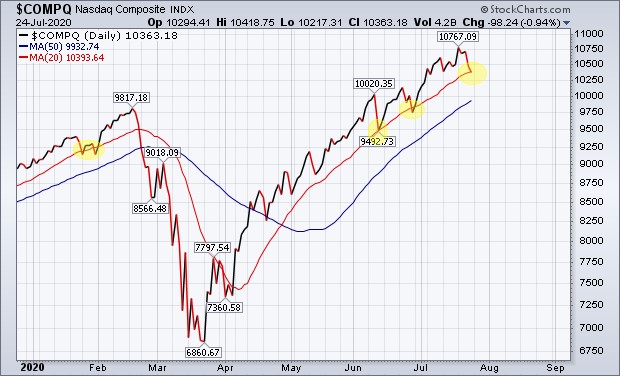 In addition to big tech/market cap earnings, we also have the Federal Reserve meeting, announcement, and press conference this week.  That always has the ability to be market moving.  Chairman Powell will be sure to choose his words wisely, something he's seemingly mastered since his gaffe in December of 2018.  We'll also hear more about the impending stimulus package that's headed our way as our fearless leaders continue to jostle about another round of stimulus checks, the ideal amount of unemployment benefits, and how to enhance/reload the PPP.

Interestingly, what better way to gain the support of the public for further policy actions than to announce the deal after the Q2 GDP number released on Thursday! (Speculatively speaking, we're watching for a deal to be announced Friday morning).  Fiscal and monetary policy have both been all in with a "whatever it takes" approach to combating the economic implications of the coronavirus, and we expect to hear more of the same over the week ahead.

The final week of July is upon us, and we expect it to be volatile, one way or the other!

The S&P 500 is presently higher by 3.72% for the month of July.  The week ahead will be the final five trading days of the month, and the index is in position to record a four- month winning streak, and close at a fresh all-time high monthly close.  Our current all-time high monthly close is 3,230.78.  A close just slightly above that wouldn't operate as an all-clear sign, but a close above ~3,330 would definitely signify a quantifiable "breakout", at least according to the 3% rule.

Until such time, the index remains in "neutral" with a meaningful tilt toward drive.  The the car is rolling, it appears the traffic is clearing, but we'll need to see evidence that we've actually slammed on the gas  Conversely, a monthly close below 3,200 would mark a second consecutive calendar month to trade beyond the 3,230.78 level, but ultimately fail in closing the month at a fresh all-time high.  That would be interpreted through the lenses of "distribution", and a sign that while the car is rolling, the traffic might not actually be clearing. 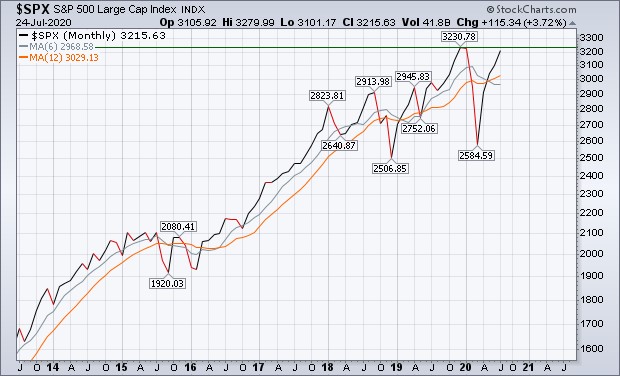 As we've often discussed, asset allocation decisions are not only a function of your individual investor attributes, but also a function of an asset class's absolute performance and its relative attractiveness compared to other asset classes.

Given the wide range of future outcomes for both the global economy and all asset classes in the traditional investable universe, we've been preaching "diversification" for months.

Importantly, we're generally not advocates of diversifying for the sake of diversifying, which is the standard, robotic-like approach of most financial advisors and/or investment managers.  Instead, we believe in concentration, especially when there are only a few asset classes in discernible uptrends.  In our view, there are times to be diversified by investing in a variety of asset classes, and times to invest with a concentrated asset allocation, investing in only a few asset classes (perhaps only one).  But as we head into August of 2020, it's undoubtedly a time to be diversified.  Here's why:

Fixed Income's Primary Trend Is Up

While stocks lack a primary trend, nearly the entire fixed income asset class is in a primary uptrend.  If we focus on the area of the fixed income space that tends to provide the best "diversity" to stocks, the iShares 20+ Year Treasury Bond Index fund (ticker symbol TLT), we see that TLT is on pace to close July at a new all-time high and is in a decided uptrend 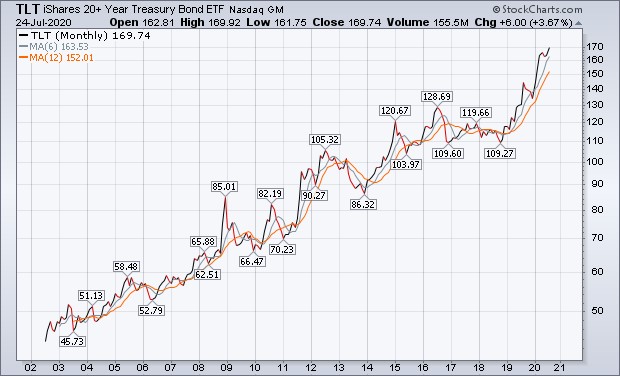 If we measure TLT against the S&P 500, as measured by the iShares S&P 500 Index fund (ticker symbol IVV,) we can note that TLT is also showing relative strength when compared to stocks.  TLT has outpaced IVV by 18.31% the last 12 months. 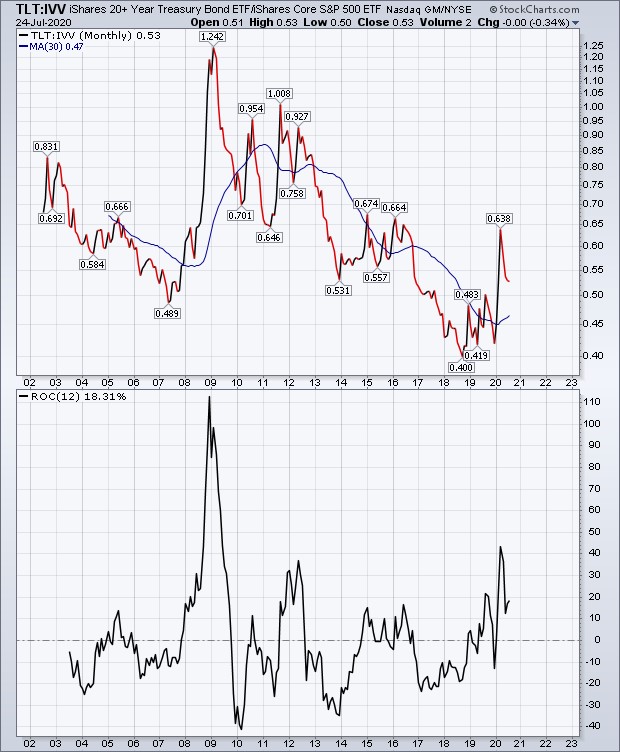 If the impetus behind diversification is to position portions of your portfolio to perform in a variety of unknown future macroeconomic climates, TLT's role is to operate as a safe haven in the event the future for the economy and corporate profitability is far worse than market participants in stocks are pricing in at the moment.

TLT is probably your portfolio's best friend in the event "we're doomed".  This works to provide a compliment to stocks, which undoubtedly thrive in the event that "we're not doomed".

Gold is the Same Story

Gold's primary trend is up too, and it's absolutely trounced all other asset classes in the traditional investable universe.  Gold, as measured by the SPDR's Gold Shares Index fund (ticker symbol GLD), is on the verge of closing July at a fresh all-time high too.  GLD has climbed from a monthly close at $112.76 in early 2018, to a potential monthly close near $180 here in July.  The metal came into this month on a four- month winning streak, something that's often been a sign that the metal needs a break, and yet GLD is higher by 6.77% thus far in July - a major sign of strength. 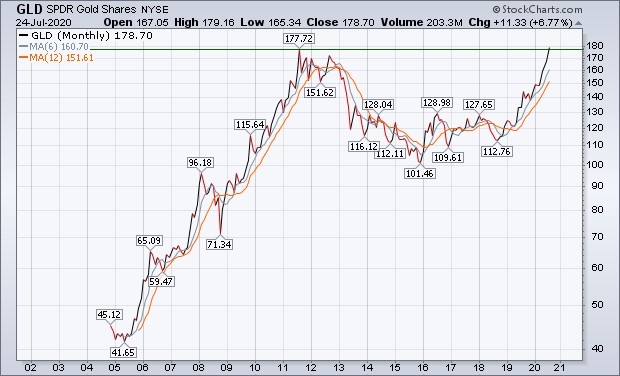 If we measure GLD against the S&P 500, again by the iShares S&P 500 Index fund (ticker symbol IVV), we can note that GLD is also showing relative strength when compared to stocks.  GLD has outpaced IVV by 21.93% the last 12 months.  There's your "alpha", assuming a liberal definition of the word. 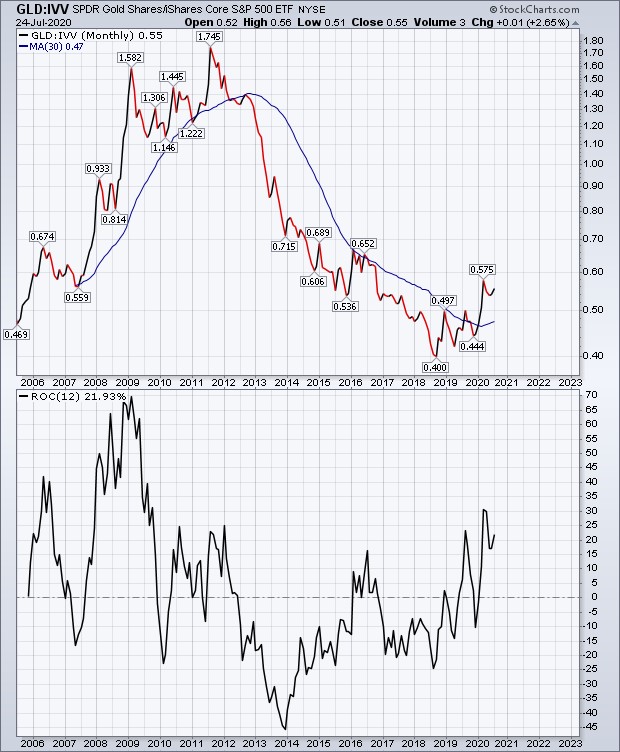 So, given where we are in the world (filled with chaos, uncertainty, and cardboard cutouts watching major league baseball games), a portfolio that's prudently diversified would seem to include stocks, bonds, and gold for the majority of investors.  We don't think that's going to change any time soon, unfortunately.

Gold has now increased 7 weeks in a row and blatantly defied its historical bias for weakness following 6-week winning streaks as we discussed last week.  The great Wayne Whaley always preaches that when an asset trades in opposition to a strong historical bias, go with the market.  That would appear to be the case thus far for gold. 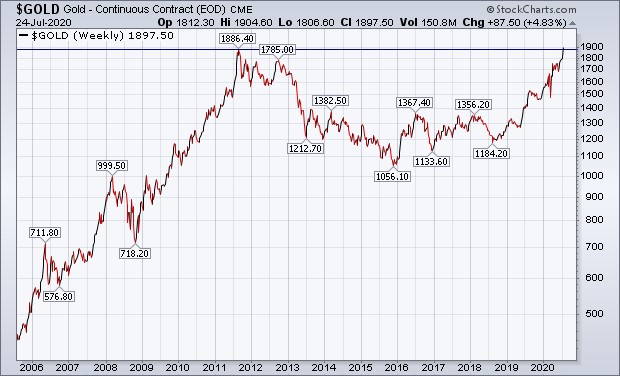 So we're on to a 7-week winning streak for gold.  Like 6-week winning streaks, gold's forward performance following 7-week winning streaks is mostly red, meaning gold closes lower four weeks later, but the instances from the 1970s are mostly an exception.  Gold is remarkably "overbought" on its daily chart, and its trailing 14-day Relative Strength Index (RSI) closed Friday at 80.91, so a pullback would be totally normal.

However, we'll view any pullback for gold as normal, healthy, and temporary given the context of what's transpiring.  Weakness in the short term will only interrupt gold's primary uptrend, it won't end it...especially since we expect to hear the Federal Reserve say "we're going to inflate or die" this week.  Not exactly in those words, but that's the most probable takeaway from whatever Powell says. 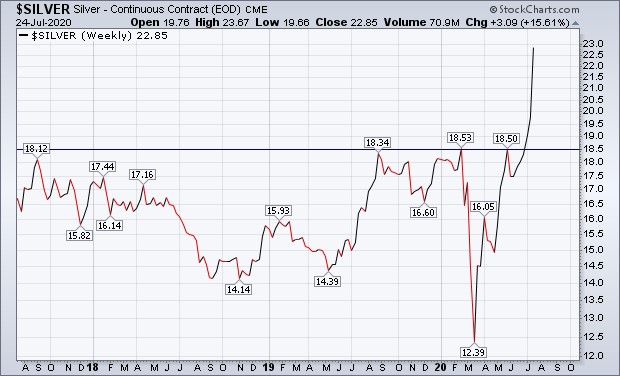 Silver is known to be gold's crazy little brother, meaning when the going gets good in the metals space it's silver where things get really, really, really good.  But this goes both directions, and speculation to this degree in silver is a bit worrisome, at least for the short term.  Like gold, we consider silver's breakout to be a positive over the intermediate and longer term, but in the short term a 15%+ advance in five trading sessions, putting the stamp on a 7-week winning streak, is a bit excessive.

We'd like to see gold and silver take a break, recharge their batteries, and then continue to travel to the north.  A further advance from here would seem to only exacerbate "overbought" conditions that precede sharp, fast, violent corrections.

As always, another exciting week awaits.