The index got off to slippery start this week, trading down to 3,937.65 at Tuesday's low. However, as soon as Fed Chair Powell starting speaking on Wednesday the S&P 500 started climbing to the upside. The index moved from Wednesday's low at 3,938.58 (before Powell's speech) to Wednesday's close at 4,080.11 (after Powell's speech), a gain of 3.59% over the course of the day. The index would then trade up to the 4,100 level on Thursday before backing off to finish the week.

"We do believe there's a good chance that we'll test the first level of "resistance" at the ~4,100 region over the coming week. We believe the price action there will be telling; it will reveal if there is any change in the collective actions and behaviors of market participants."

Admittedly, we thought any trade up to ~4,100 was likely to occur in the beginning of the week, say Monday or Tuesday, not closer to the end of the week. Regardless, the retest of "resistance" from early September's highs is now underway. As we wrote last week, if we find selling pressure over the week ahead it will support the "bearish" narrative, or the idea that higher prices in the present paired eager sellers and hesitant buyers across the marketplace given their fear and expectation of lower prices into the future.

If we can somehow sustain this week's gains and show even further strength it will support the idea that the collective actions and behaviors of market participants were different this time.

One could argue that higher prices didn't bring eager sellers into the marketplace. It will also be accompanied by a sustained breakout above the 200-day simple moving average. Naturally, the picture will turn decidedly more bullish if the S&P 500 can find further buying interest from here. 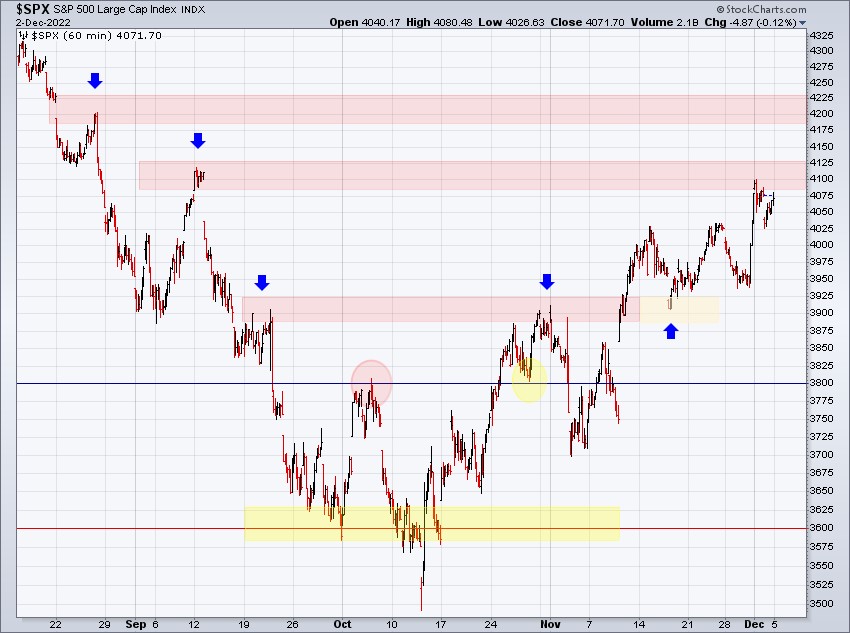 As we referenced earlier, Powell's speech was the fundamental catalyst this week (click here). The statement that seemed to give the market a boost:

"Monetary policy affects the economy and inflation with uncertain lags, and the full effects of our rapid tightening so far are yet to be felt. Thus, it makes sense to moderate the pace of our rate increases as we approach the level of restraint that will be sufficient to bring inflation down. The time for moderating the pace of rate increases may come as soon as the December meeting."

The federal funds futures market now has the Fed hiking 0.50% in December and two 0.25% rate hikes in both February and March. If you cross-reference the blue shaded cells in the table below with the table from last week's Update you'll note that they've all shifted one cell to the left. That implies that the market, collectively, believes the Federal Reserve tightening cycle won't be as tight as they previously thought given Powell's speech on Wednesday. 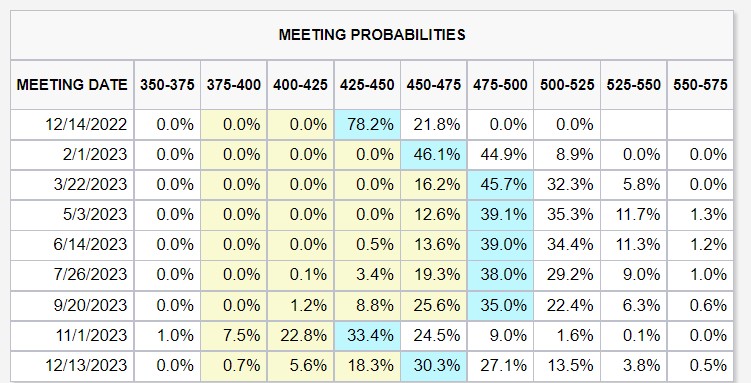 Further, the market believes the tightening cycle is over in a few short months. Whether or not this is indeed the case is ultimately a derivative of the next few chapters in the inflation story. It's why we say the inflation story holds all the cards, because if inflation somehow reaccelerates to the upside over the months ahead then there's huge risk to financial markets and the health of the economy over the months ahead. It's not the most probable scenario in our opinion, we're firmly in the "peak inflation" camp (i.e., we believe year-over-year inflation will be in the ~3% range one year from now, the Fed's done enough), but it's clear as of now that the market isn't pricing in inflation reigniting to the upside over the months ahead.

The bond market had another strong week and also liked what Powell had to say.

If that's a bottom on the chart for AGG at $92.78, we think there's a happy ending to the inflation story. It's the recession story that will then take center stage. 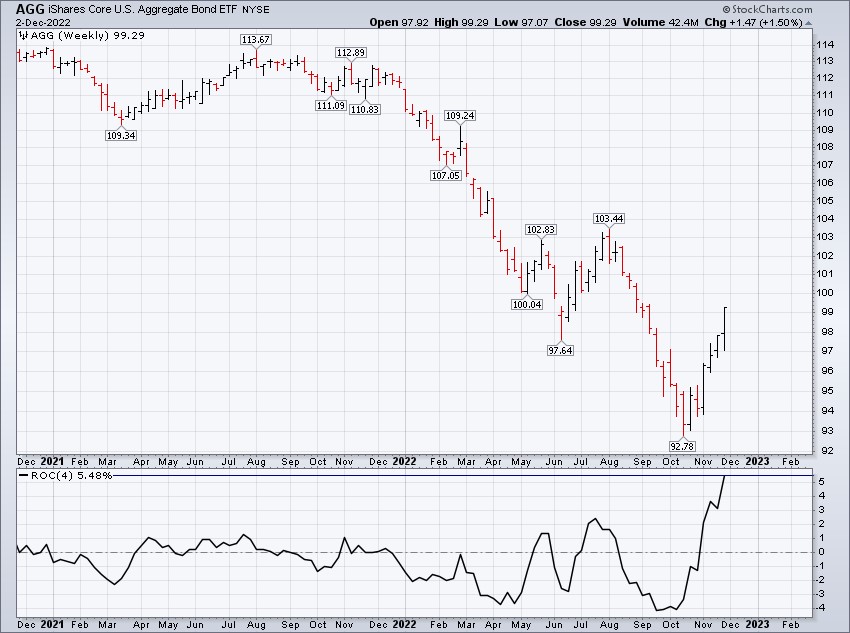 From a breadth perspective, we now have 319 stocks within the S&P 500 that closed Friday above their 200-day simple moving average. That's the highest reading since the January 14, 2022 close at 338. Also on Friday, 455 stocks closed above their 50-day simple moving average, and that's the second highest reading in 2022, just a few stocks shy of August's peak at 462. Breadth has certainly improved, and the army is advancing based on its depth...not just the strength of a few strong generals.

As for the week ahead, let the retest begin! The S&P 500 traded up to the ~4,100 region on Thursday only to then trade down to ~4,026 on Friday. While the index did rebound into Friday's close, there was an element of "resistance" that revealed itself at the ~4,100 level...just like we saw in early September. Can the index sustain above its 200-day simple moving average? Can the index manage to break out above early September's highs? A pivotal and important week awaits.

The S&P 500 put the finishing touches on the month of November this week, rising by 5.38% for the month, the second consecutive monthly advance of more than 5%.

Again, if market participants, collectively, aren't willing to sell 'em after a ~17% rally right in front of a macroeconomic backdrop that is almost certainly recession in 2023, then clearly market participants aren't all that afraid of the impact of said recession (i.e., a soft landing is what the market is discounting). Now, the S&P 500 does tend to discount what lies ahead notoriously incorrectly at and around recessions (see the S&P 500 trading to new all-time highs in October of 2007 as an example), but its overall track record in discounting the future is remarkably accurate. The price action of the S&P 500 in the present is the best predictor of the macroeconomic climate into the future, and that's why the price action here in December is going to be signal, not noise, in our opinion.

The S&P 500 managed to close the month of November back above its 10-month simple moving average. Should the S&P 500 close the month of December above its 12-month simple moving average, and above the ~4,130 level, we'll be looking at a fresh six-month high close for the index. That will rotate both short- and long-term momentum strategies back to "risk-on". So, December is a "prove it" month for the S&P 500. 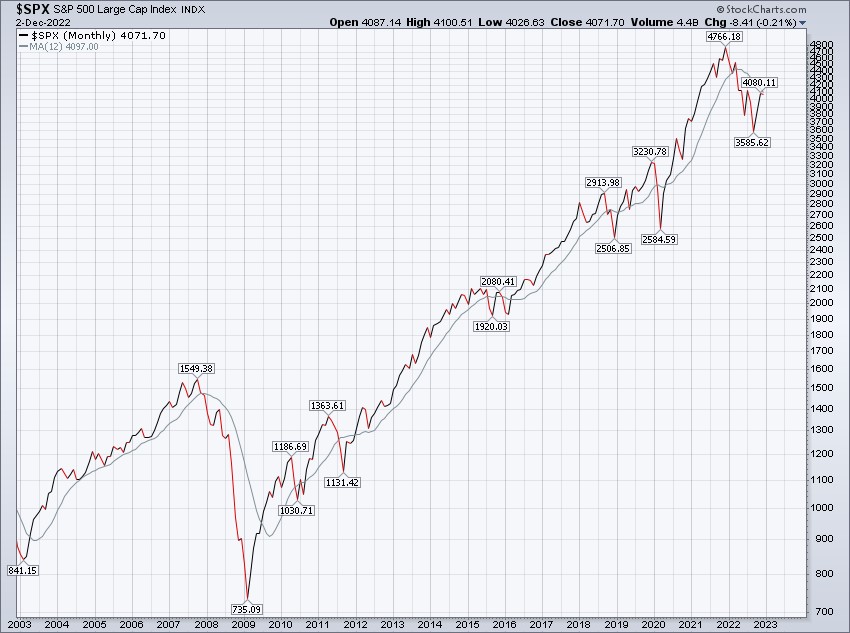 In last week's Update we wrote that the table was set for the S&P 500 to record a "2 & 10% Price Thrust" reversal. We noted how this has been a part of virtually all lasting market bottoms the last seventy-plus years. Well, we're pleased to report that with November's monthly close the S&P 500 recorded its twelfth "2 & 10% Price Thrust" reversal since 1950.

The primary criticism here, and it's a valid one, is the fact that there are only eleven prior instances on the table.

That said, if you're thinking that you should sell your stocks because of the S&P 500's rally the last two months then that thought is definitely misplaced. The strength of the last two months is most certainly not a "bearish" sign, forward-looking, since there is literally no evidence that strength won't beget strength there. After all, the S&P 500 has never closed lower 6, 8, and 12 months later after a "2 & 10% Price Thrust" reversal. So while the above table can't truly predict what lies ahead and it can't guarantee that the S&P 500 will be higher over time, it can absolutely dispel a "bearish" forward-looking bias, something like "this can't continue!" given the S&P 500's meteoric rise the last two months. Yes...this can continue.

Remember, anything is always possible for the S&P 500, and the index has an uncanny ability to trade beyond the limits of imagination. We probably can't even imagine what lies ahead into 2023. "Will this continue?" is likely the better question, but nobody truly knows the answer!

All we're ever left to do is make an educated guess and allocate our assets with prudence, care and thoughtfulness. At the moment, we believe that entails allocating as if the worst is yet to come...but being prepared to act swiftly in the event the best is right around the corner.