The index has now increased two consecutive weeks and has gained a whopping 32.07% on a closing price basis over the last 10 weeks (after crashing -31.81% on a closing price basis the prior 5 weeks).  Friday's close is the highest weekly close since February 21st at 3,337.75.  The index is now only -9.93% below its all-time high weekly close at 3,380.16.  The rally has extended far beyond the limits of imagination, especially given the context of what has transpired economically and the uncertainty surrounding the forward-looking health of the economy.  It's easy to refer to the last two months as "The Great Disconnect".

In last week's update, we wrote at length about the S&P 500 being face-to-face with resistance:

"The bulls snatched control of the ball last week and have now moved into position to score.  As we enter the final week of May, there are four trading days to go and it's now 1st and goal from the 1-yard line.  The S&P 500 didn't breakout this week, but it's in prime position to do so over the week ahead."

It appears that the bulls scored on 4th and goal, but like all scoring plays, the play is under review.  The S&P 500 seemed to be running into resistance at and around its 200-day simple moving average (200MA) all week long. Wednesday saw a downside reversal back below the 200MA, Thursday then saw the S&P 500 trade higher by 1% during the session, only to then close the session in the red.  Friday saw the S&P 500 trade down to 2,998.61, below the 200MA, only to then surge to the upside the final hour of trading.

We've often written about the need to quantify the word "breakout" via both price and time.  Readers might recall us detailing the 3% rule and 4-day rule, broadly used to define the word "breakout" as 3% price extension above "resistance" paired with four consecutive daily closes above "resistance".  The combination suggests higher prices didn't bring eager sellers into the market, thus supporting the validity of the breakout.  We didn't get that this week, even though we were in good position at Thursday's high at 3,068.67.  This is why the touchdown is under review.  There's a chance the ball didn't cross the goal line just yet, even though the chart below appears to now show the ball clearly across the goal line. 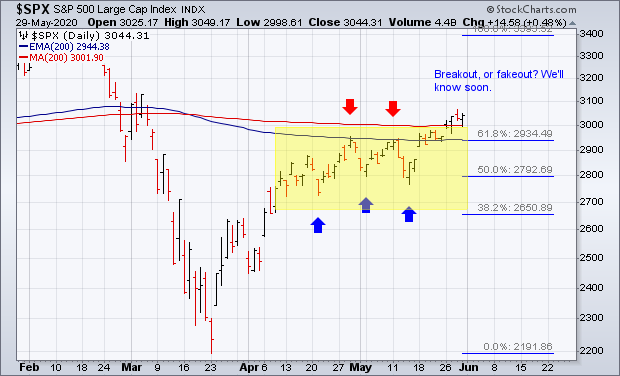 The trillion dollar question is whether or not this rotation will persist.  One way we can measure the breadth of the S&P 500 is to compare the performance of a market- capitalization weighted S&P 500 (SPX), which sees roughly 50% of its performance attributed to just technology (information & communication) and healthcare, with that of an equal-weight version of the S&P 500 (SPXEW), which is more evenly distributed. Technology (information & communication) and healthcare only account for ~30% of its performance. Ironically, the ratio of SPX to SPXEW finished the week with its own 1st and goal from the 1-yard line, too. 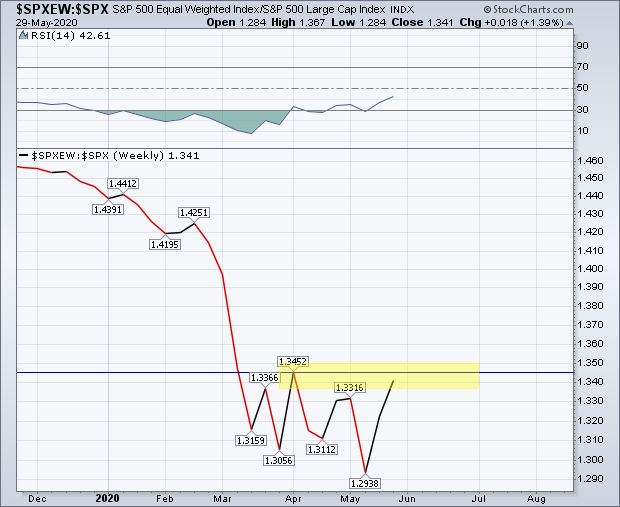 As we look toward the week ahead, the biggest question is:

If it can, the touchdown will stand.

If it can't, the points the index scored this week will be coming off the board.

The S&P 500 hasn't recorded a three-week winning streak yet in 2020.  Perhaps the first one is only five days away.

As a former 400m runner, this is analogous to running a terrible opening 200m.  In a "bear market", and given the advance since the March low, you would expect to see the S&P 500 struggle to win the race after falling so far behind at the halfway mark.  Instead, the S&P 500 found its stride and came roaring back to win the race. Buying interest overwhelmed selling pressure, and the index gained 10.03% from May 14th's low into May's monthly close.  What began as "sell in May and go away", turned into a sale in May that led participants to the store to buy 'em like mad.

If the price action in the present reveals valuable information re: the forward-looking expectations of market participants (a huge "if" given modern market structure), then there's only one reason why participants would eagerly bid stocks in the month of May - they expect higher prices into the future. 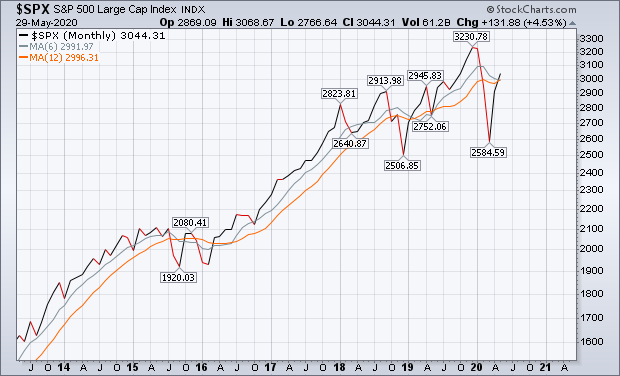 What Should Long-Term Investors Do?

Long-term investors remain best served investing in a moderate asset allocation, avoiding any big bets, and emphasizing "diversification".  While stocks lack a primary trend (i.e., they're in neutral), two other broad asset classes are in primary uptrends, or 'drive".  Fixed income/bonds and gold/precious metals have contributed nicely thus far in 2020 and over the trailing year period.  While individual attributes and preferences matter, the majority of investors are best served having stocks, bonds, and precious metals in their portfolio right now.

As we wrote last week, "neutral" trends are indicative of a wide range of forward-looking outcomes. There's no better way for us to illustrate that then to look at the historical precedents associated with what we've seen thus far in 2020.

If we emphasize what has transpired the first 5 months of year, then the S&P 500 is losing, and the index is down -5.77% through May's close.  Calendar years that are negative year-to-date (YTD) through May's close have generally struggled on a forward-looking basis.  The S&P 500's forward 1-, 2-, 3-, 4-, and 6-month average returns are all negative.  June has pronounced seasonal weakness when the S&P 500's YTD return is negative through May.  June has closed higher just 3 of 14 instances for average declines of -1.76%.  This would target a June monthly close at and around ~2,990, which would leave the S&P 500 still fighting with its 200MA on the daily chart.

If we add an asterisk to the table above and only call out those calendar years that are negative YTD through May's close, but saw the S&P 500 increase in both April and May, the picture doesn't get any less red.  There are only four prior calendar years that match, but the two most recent ones are 2008 and 2001.  Those are two of the nastier years in the S&P 500's history (and reference back to last week's Update about their fight with the 200MA in May).

On the flip side, if we emphasize the price action the last two months then that suggests the downtrend is over, as if the collapse in March was more of a violent correction, a temporary decline that only interrupted our "bull market", it didn't end it.

We'll call the last two months a "2 & 10% price thrust reversal".  This is defined as a two-month period where the S&P 500 gains 10% or more, yet finishes with negative trailing 6-month returns.  May of 2020 is the 11th instance of this happening since 1970, and the prior 10 saw the S&P 500 close higher 100% of the time 6 and 12 months later - for gigantic average monthly returns.  This seems totally impossible, but that's why its probability is greater than most would believe.

According to history, there's a compelling case we're headed much lower, and a compelling case that we're headed much higher.  This is part of the reason we value studying history to the degree that we do - because it serves to reiterate the idea that *anything is possible*.  This helps us be totally dispassionate long-term investors and eliminate bias or emotion from influencing our investment management process.  We believe this can help optimize performance over the long term and help investors adhere to their long-term investment plan during the most uncertain of times...times like now.

The Bureau of Economic Analysis released the Personal Income and Outlay report for April on Friday and the information was stunning to say the least.

The obvious influence here is the gigantic fiscal support provided by the government, and its size, scope, and influence is no better found than the fact that collectively, incomes *rose* in April, in spite of the massive job loss we've experienced.  When analyzing the numbers, private wages fell roughly $1T but government payments increased by a whopping $2.9T with roughly $2.59T of that being stimulus payments and $430B being unemployment insurance.

We wrote in detail last week about how the recession has been "mostly painless thus far" and Friday's report would seem to support this narrative.  Broadly speaking, the early stage of recession is associated with declining incomes, declining expenses, and the deflationary cycle of lower consumption leading to lower employment.  Consumer behavior, generally speaking, skews toward fighting, scratching, and clawing their way to a healthier balance sheet.

This early stage of this recession is a total opposite.  While we're being tongue in cheek with the title of this section (the official start date of this recession will undoubtedly be before today), the challenges the consumer faces during recessions are yet to get underway.  There's even data to suggest consumers have been responsible with their stimulus payments and newfound free cash flow - they've collectively paid down credit card debts massively.  Outstanding credit card debts have plunged to multi-year lows. 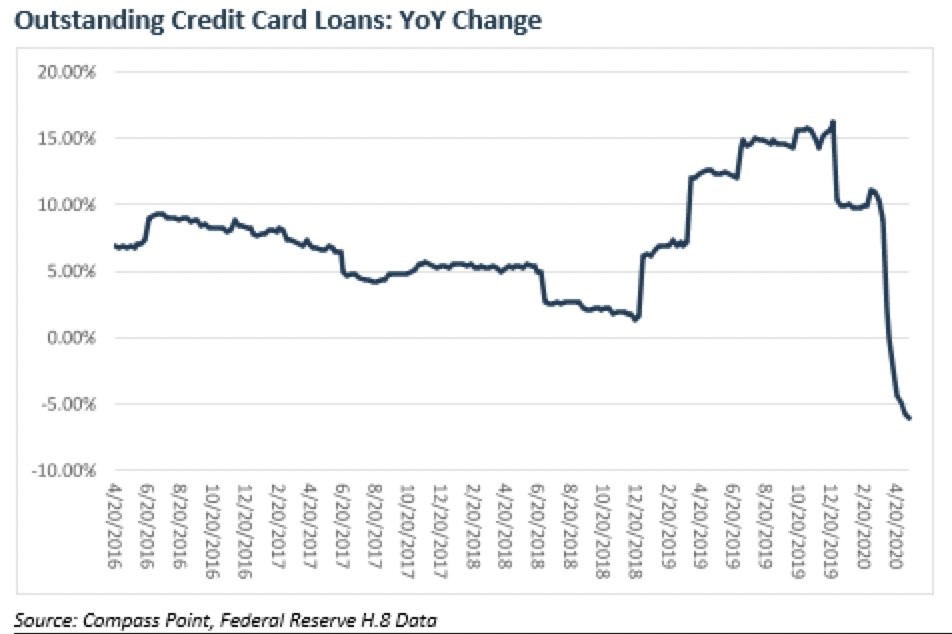 The obvious risk here is that these government benefits are meant to be transitory. Stimulus payments were designed as a one-time payment, and federal unemployment benefits of an extra $600 per week are supposed to end at the end of July.  However, do we really believe politicians will not extend these unemployment benefits? (click here) Further, is it all that impossible to believe that phase 4 stimulus will provide an additional check in the mail?  The government has already pledged "whatever it takes", and we're in an election year.  We also have a weekend filled with societal chaos, and the best way to fuel more societal chaos is to not extend unemployment insurance and not provide anymore meaningful assistance - especially since it doesn't appear the coronavirus is going away and a vaccine isn't likely until 2021 at the earliest.

Why Has the Market Risen in the Last 10 Weeks?

In terms of the impact to markets, the market's meteoric rise the last 10 weeks may be attributable to the belief that the bridge the government has built is sufficient in bringing consumers across to the other side of a world free from coronavirus fear.  Not only consumers, but consumers with relatively healthy balance sheets, consumers who collectively don't find themselves in a destitute situation, thus consumers who will have the ability to spend.  It's in this scenario where spending and consumption's ability to return to normal is a confidence game, and we can't help but feel like confidence is linked to public health and the vaccine.  Consumer confidence has plunged so much that one can argue they're likely to only get more confident into the future.

As we wrote last week, we believe a vaccine is a matter of when, not if, and pairing together consumers with healthy balance sheets (the kind that can be ready and able to consume) with a vaccine sets the stage for a potential huge economic slingshot in 2021.  This is our best guess as to what the market may be pricing in at the moment - the idea that the pairing of an absolutely gigantic government backstop with a high probability of a vaccine creates a perfect one-two punch for a huge rebound in both the economy and corporate profitability in 2021.

The risk here is obviously if the market is wrong - that's how "corrections" unfold.  A second wave, additional lockdowns, squabbling in D.C. and thus no phase 4, or if consumers simply choose saving over spending.  Consumers, collectively, may still have anxiety over their future income, and there is certainty over their expenses increasing.  Mortgage forbearance means mortgages are coming back online, student loan payments will resume, childcare costs will return, transportation costs will ascend, discretionary costs will grow.  This means the savings rate can only go down from here as we attempt to reopen, and lower incomes with rising expenses will damage the health of the consumer's balance sheet - meaning the recession will have begun.

So, while it's clear the recession hasn't started yet, it's unclear whether it's going to start in 3-6 months.  Remember, this is a marathon, not a sprint.