The index clearly didn't like what Mr. Powell had to say, and then traded down to 3,758.68 at the low of the day, a decline of -3.91% relative back to Tuesday's high. By Thursday the index was sitting at 3,698.15, its low for the week, but Friday managed to finish the week on a positive note with the index adding back 1.36% to turn what was a weekly decline of more than -5% into a weekly decline of just -3.35%.

So, where do things go from here? From a technical perspective we're sort of in no- man's-land. When the S&P 500 broke out of the trading range between ~3,600-3,800 we thought it was on its way to the ~4,000 level. Instead the S&P 500 reestablished resistance in the ~3,900 region, failing at almost the exact same level from late September's highs (blue arrows on the chart below). So one trading range simply morphed into a new trading rage with resistance now defined in the ~3,900 region rather than the ~3,800 region, with support remaining at the ~3,600 region. Any and all price action in between these two price regions (noted on the chart below by the red and yellow shaded horizontal rectangles) should be perceived to be nothing but noise. 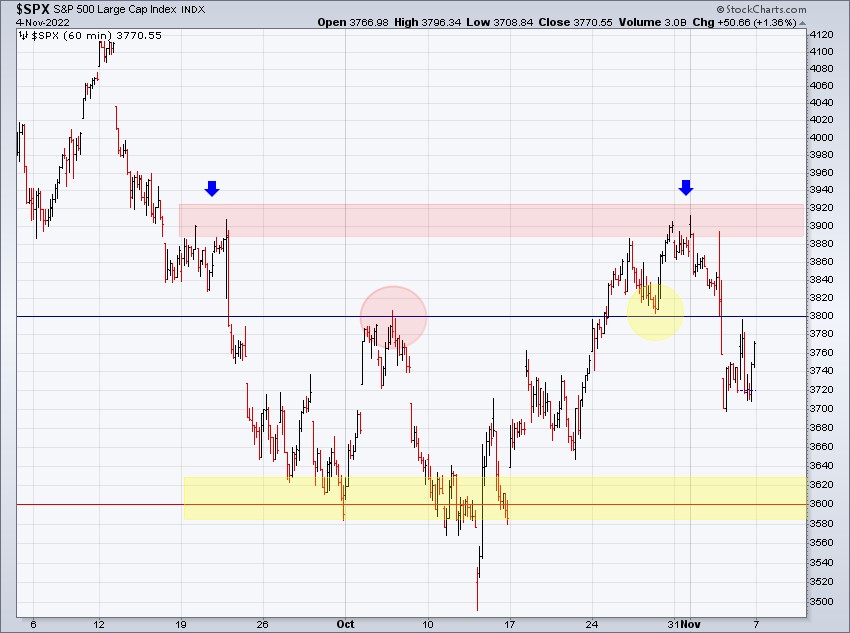 Fundamentally, the narrative for this week's selloff was Powell's continued "hawkish" rhetoric regarding forward-looking monetary policy decisions. During his press conference, he mentioned no sign of a pause or a "pivot", he made no acknowledgement of any progress that's been made on the inflation front, and he said nothing to indicate there would be a slowing in the pace or size of future interest rate hikes. Instead, there was nothing but language that suggests the Fed's going to continue to hike and that's that...no ifs, ands, or buts about it. Powell said:

"It is very premature to think about a pause in our interest rate hiking cycle".

Powell also shared how he views risk to the Fed's monetary policy, forward-looking:

"If we were to over-tighten, we could use our tools later on to support the economy. Instead, if we did too little we would risk inflation getting entrenched and that's a much greater risk for our mandate".

Digesting these two quotes appears to have led market participants to discount future monetary policy as if it's tighter and higher for longer.

That is, Powell has led the market to believe that the federal funds rate will ultimately be raised to a level that's higher than what was previously expected and it will then stay there for longer than what was previously expected. That's a double whammy of negative news and it jives with an increased probability of a "hard landing", economically speaking, which increases the odds of the S&P 500's constituents losing money into the future.

Following Powell's press conference on Wednesday, market participants in the federal funds futures market now have the federal funds rate reaching 5% in March of 2023 before the Fed finally sits on their hands via a "pause" for nearly the entirety of 2023. 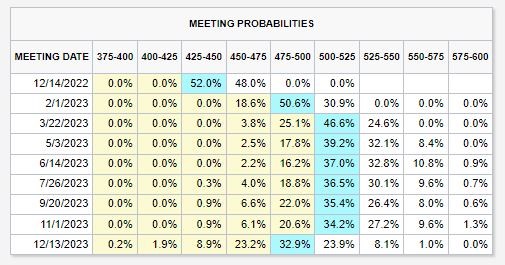 Now, there is always a chance that Powell's bark will be worse than his bite (we'll never forget the 2019 pivot). Further, additional Fed presidents sang a different song this week (click here).

We continue to believe the Fed will be data dependent, perhaps stubbornly so, meaning it's the inflation data/story that holds all the cards. We'll get October's inflation data on Thursday of this week, so that's a catalyst for volatility.

The Consumer Price Index (CPI) has actually only increased by 0.49% over the trailing three months, that's an annualized rate of 2% per year. However, there's always the possibility of CPI reaccelerating to the upside, so the most important figure we'll be watching on Thursday is the month-over-month change in CPI. The Cleveland Fed's Inflation Nowcasting (click here) is forecasting a month-over-month change in CPI of 0.70%, and if that's ultimately proven to be accurate on Thursday we'd find that disappointing. The Fed's not going to be able to reach any sort of "price stability" with nearly 1% per month increases in CPI.

In other words, an inversion of this magnitude should only occur if market participants have conviction in the Fed cutting the federal funds rate into the future. Think about it: The only reason an investor will accept 4.17% annualized over a decade when they can get 4.66% over two years is because they believe they'll be reinvesting two years from now (or four years from now) at an interest rate that's considerably less than 4.17%. The Fed is totally positioned to act like both the arsonist and the firefighter, Powell said so himself.

In terms of sectors this week, it was more of the same as the combination of a "hawkish" Fed and rising interest rates have seemed to be exclusively paired with energy stocks outperforming and technology stocks underperforming. Naturally, energy was the big winner this week, rising by 2.43%, while technology was the biggest loser this week, falling by -6.63%. Energy is now higher by a whopping 70% thus far in 2022 and is flirting with breaking out to decisive new all-time highs. 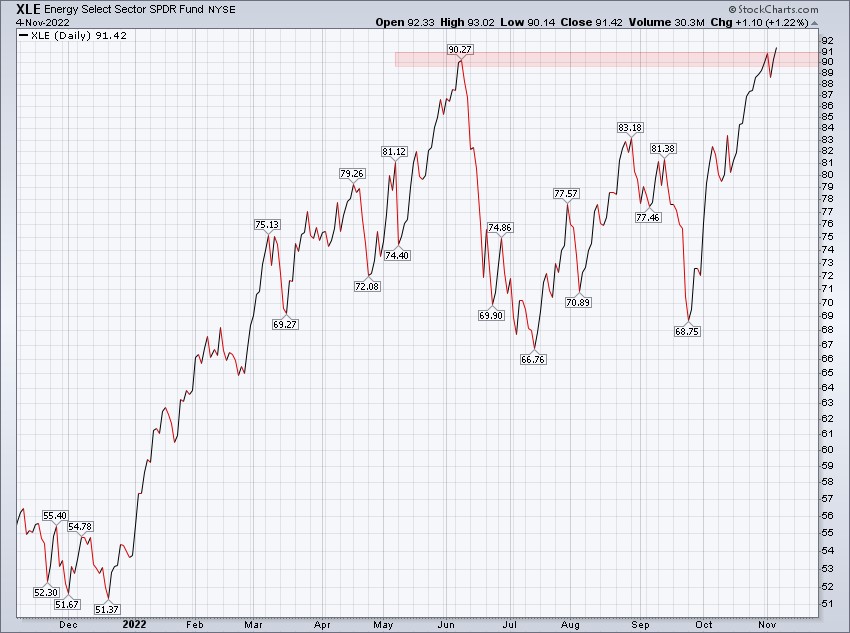 As for the week ahead, there's a ton of "Fedspeak" and then we'll get the CPI report on Thursday. It's a fairly pivotal week in our opinion as "inside weeks" aren't the norm, so there's a good chance that the week ahead will see the S&P 500 either give back all of Friday's gains, or recover all of last week's post-Fed losses. The odds would seem to favor the former over the latter, but the market has an uncanny ability to take the road less traveled. Another exciting and volatile week awaits.

The answer is unknowable as of today, obviously, but if we were forced to bet we would bet that the S&P 500 trades below 3,491 in 2023. But we recognize that anything is always possible. Maybe, just maybe, 3,491.58 is going to be remembered as the bottom.

Part of why we'd bet that the S&P 500 will trade below the 3,491 level in 2023 is because the primary trend for the index at the moment is down, or "bearish". When the primary trend is down, the path of least resistance for the price of the S&P 500 is lower, not higher. There's not enough evidence on the chart to suggest the primary downtrend is over yet, even if the price of the S&P 500 is up nicely since October's low and unchanged since June. Remember, a primary uptrend is defined as a series of higher highs, higher lows, and higher closes visible on the monthly chart. That's most certainly not what we see on the chart below. We see the exact opposite. 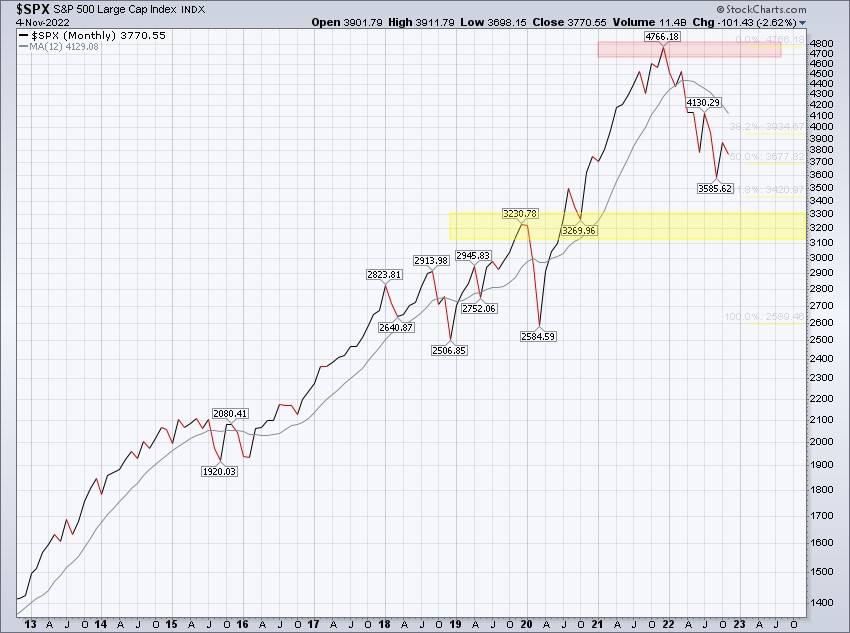 This does not preclude the S&P 500 from establishing a primary trend at some point over the forward one year. Furthermore, while we believe the S&P 500 will trade below 3,491 in 2023, we also recognize there's a great chance the S&P 500 closes October of 2023 higher than October of 2022.

That's probably something we'd bet on too since, quantitatively, the S&P 500's forward 1-year return is higher most of the time.

If we zoom in on all Octobers that closed higher by 10% or more relative to October's low, and closed the month in the green (i.e., it's not a negative calendar month that just closes well off its monthly low), we're left with seven prior Octobers that match. Interestingly, the S&P 500 has then never closed lower six and twelve months later. This isn't all that surprising as strength in the month of October alone has tended to precede strength over the forward one year, but it does serve to add objective evidence that there is nothing that says the S&P 500 can't have an awesome year ahead. It's easy to buy into the "the world is ending!" narrative right now, but more often than not the world isn't ending.

As we head into the final few months in 2022 it's imperative that long-term investors position their portfolio as if the worst of times are yet to come, but prepared in the event the best of times are just around the corner.

We continue to believe the combination of an equity underweight, fueled by pairing active and passive equity strategies, and active investing strategies (trading and/or finding uncorrelated asset classes and strategies) are the most important ingredients to minimize portfolio drawdown during this "bear market".

Random happenings across the investable universe: 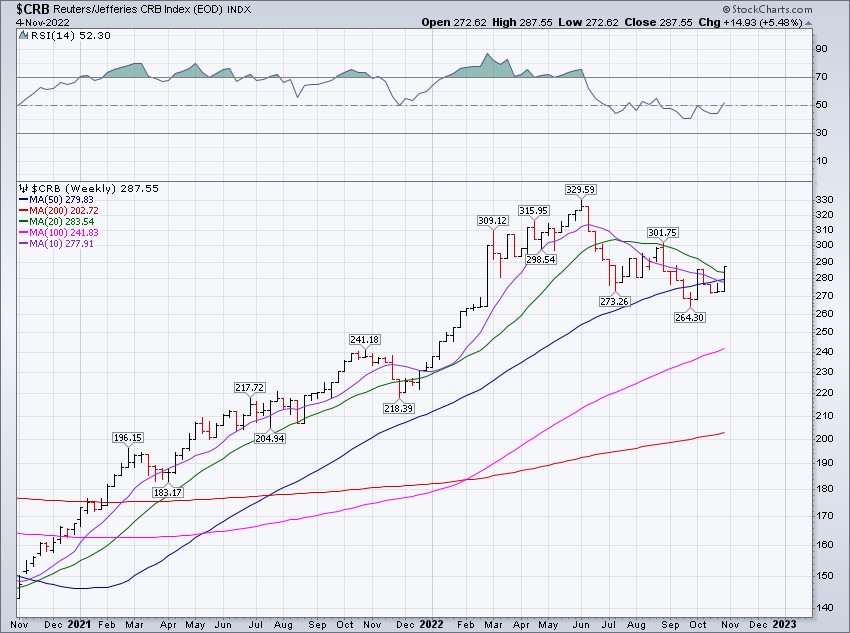 Cotton, one of the futures contracts held in the CRB Index, absolutely exploded higher this week, rising by 20.55%. We're unsure of the narrative here, but this degree of price thrust from a fairly obvious level of support is suggestive of a meaningful bottom being left on the chart. 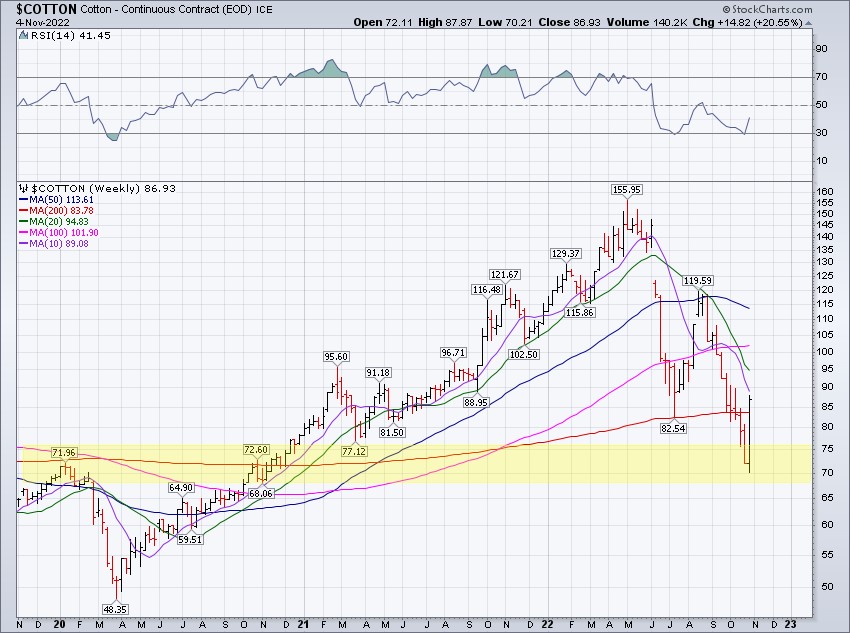 One of the more fascinating elements of the price action this week was the decline in the Volatility Index (VIX). The S&P 500 declined more than -3% this week and yet somehow the VIX declined on the week!

That's only the 12th time we've seen that happen since the year 2000 but, ironically, we saw this occur in the beginning of September too. The S&P 500 was trading in the low 3,900s then, so hopefully the index's fate, forward-looking, takes a different path this time around.

Regardless, it's definitely a bit curious that the VIX has been down three weeks in a row and sits closer to the 20 level than the 30 level. That feels a bit complacent to us and if Thursday's CPI release is much hotter than expected our guess is you'll see VIX spike toward the 30 level. 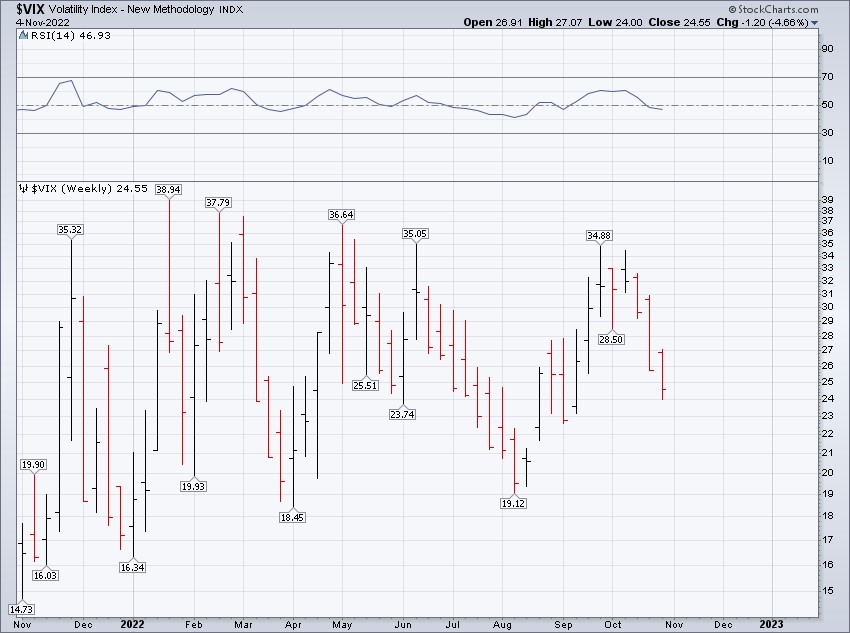