The S&P 500 fell a whopping -3.63% on Friday and closed at a new year-to-date daily and weekly closing low for 2022. Friday's decline was the worst trading day for the index since June 11, 2020's drop of -5.89%. The selling on Friday was broad- based, with all eleven sectors of the S&P 500 declining -2% or more. The big loser on Friday was the consumer discretionary sector, which declined -5.08%, obviously driven by Amazon's quasi crash (click here).

"If anything, the main takeaway is to expect more volatility. It's more than reasonable to expect the S&P 500 to trade in a +/- 5% range over the next month, especially with the Volatility Index back near 30, which would place bands around the S&P 500 at ~4,484 on the upside and ~4,057 on the downside given Friday's close. The sequence of what level comes first will then control the narrative.

For example, a trade down toward ~4,057 the next week or two paired with a subsequent reversal back toward ~4,484 in May would be viewed through "bullish" lenses."

It's through these lenses where this week's volatility wasn't all that surprising to us; the signs were there, but it was still shocking to us nonetheless. We didn't see Friday coming...it was a solid sucker punch. Friday's selloff suggests that we're going to trade down toward ~4,057 over the week ahead, perhaps even dipping below the ~4,000 level, so that's where we'll resume our search for a bottom. If we had to title next week we'd call it "In search of a bottom, part 2" as we certainly didn't find a bottom this week.

The price action of late has been downright ugly. But (and it's a huge but), the S&P 500 hasn't truly broken down yet. It's still hanging on by a thread, at least on the daily and weekly time frames.

The daily chart remains in our year-to-date support zone and above February's spike low at 4,114.65. Using the four-day rule and the 3% rule would suggest that three more daily closes below 4,170.70 to open next week, and a daily close at ~4,045, would confirm a breakdown. The thread will have broken in that situation. 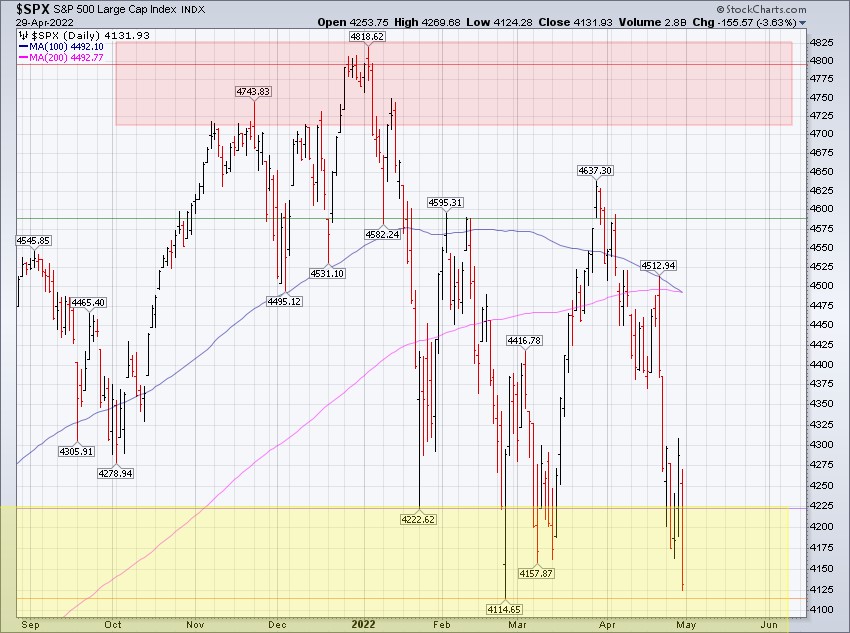 The weekly chart looks totally ominous too. Chart pattern enthusiasts (of which we are not, but we understand some participants are) will notice the "head and shoulders" pattern here. We're sitting right at a sort of neckline so we should see resolution this week. 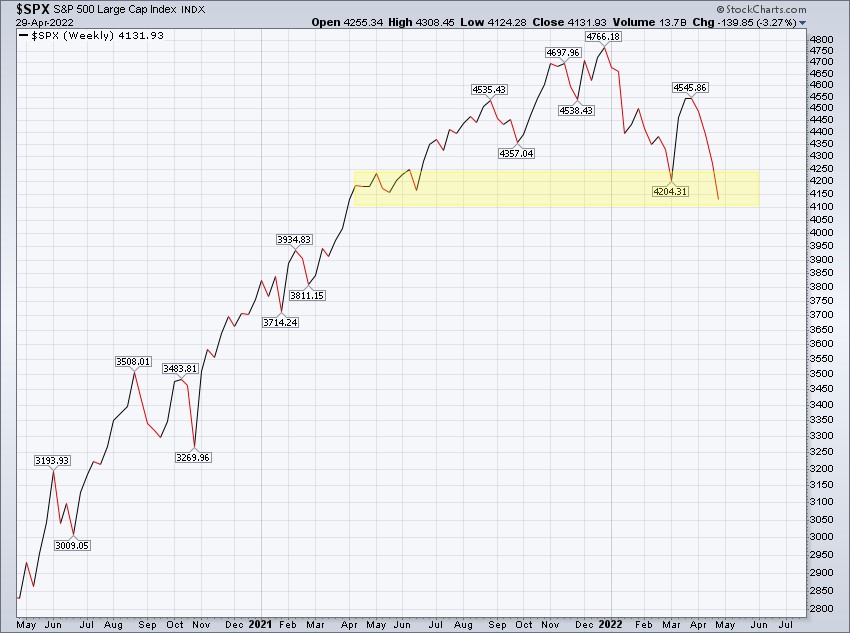 In total, the S&P 500 is now down four weeks in a row with each of the four weeks declining by -1% or more. 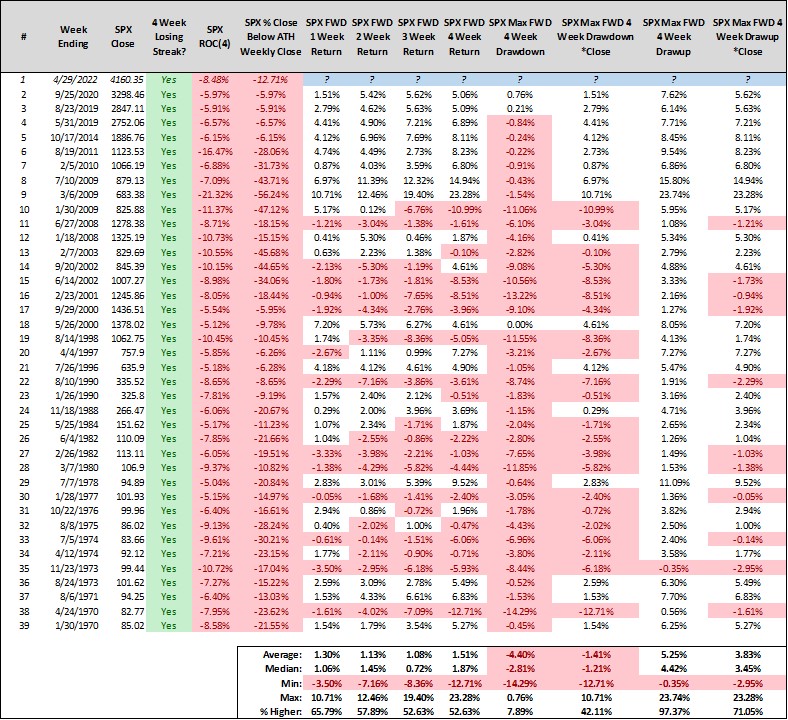 But the issue here is that most would now argue that we've transitioned out of the "since 2009" era, an era dominated by a persistent rise in the S&P 500, influenced mostly by Fed dovishness via gigantic liquidity measures such as quantitative easing and zero interest rate policy.

With market participants currently prepared for as many as 10 rate hikes this year (as measured by 0.25% increases in the federal funds target rate), the current regime is anything but dovish. Referencing back to the above table and observing all four-week losing streaks that occurred prior to 2009 will change the picture from a sure thing sign of a bottom to almost a sure thing sign of continued downside volatility over the forward one month... 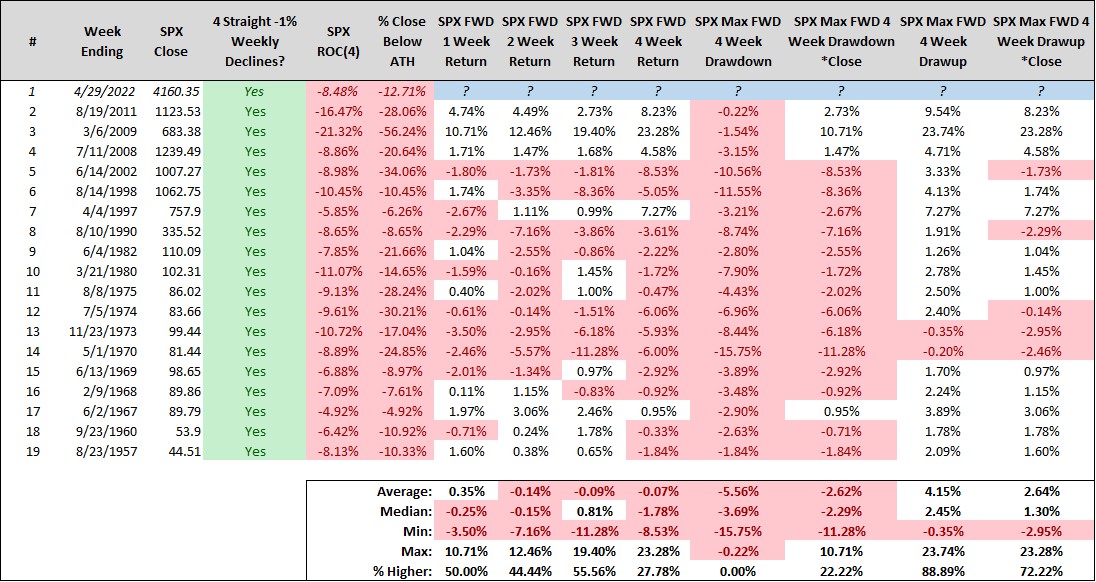 It's natural for us to think that a four-week losing streak is a sign of a lasting bottom for the S&P 500, but the data just doesn't support that. It's sort of like believing you can go all in on black after four consecutive reds at the roulette wheel, a classic gambler's fallacy (click here).

While we do believe there is a connection to the probability of events in the not too distant future based on the events in the not so distant past, mostly attributed to the behavior of market participants, collectively, being a derivative of their collective expectations for the future, they tend to be trend promoting, not trend reverting. In other words, strength tends to beget strength, and weakness tends to beget weakness. More often than not, and outside of the "since 2009" regime, the weakness exemplified over four-week losing streaks simply precedes more weakness into the future (with upside bounces along the way, of course!).

As for the week ahead, we always love when the technicals (i.e., the price of the S&P 500) and the fundamentals converge at the biggest of moments.

Here we are, the S&P 500 is hanging on by a thread, and what do we have this week? A Fed meeting. On Wednesday, May 4, the Federal Reserve will increase the federal funds target rate by 0.50%. Then, Fed Chair Jerome Powell will speak and the market will be listening.

Lately, the market hasn't liked much of anything he's had to say, but that's mostly because he's been speaking to the threat of inflation and seemingly ignoring the wishes of the market (i.e., an excessively hawkish stance that's believed to be highly recessionary). If Powell can find balance and recognize the economic risks of tightening too far, too fast, thus building in more flexibility toward a temporary dovish stance via a slower rate of tightening, we think the market will cheer. If he remains singularly focused on inflation as he has been most of 2022, then the market will probably jeer.

It's boom or bust from here, and the answer is probably both. Just don't ask us which comes first! A pivotal and volatile week awaits.

The S&P 500 finished the month of April on Friday. Coming into the month we wrote about April's seasonality, how the month is generally one of the best performing months of the year for the S&P 500. Well, the S&P 500 had other ideas this year - the index declined a whopping -8.80% in April. Ugly.

The S&P 500 finished the month of April down -13.31% for calendar year 2022. This marks the single worst start to a year as measured by the S&P 500's year-to-date return through April's monthly close in the history of the S&P 500. Literally, the worst four-month start to a year on record.

We like to judge the S&P 500's monthly returns as a prize fight, a 12-round boxing match. Through four rounds, the bulls are down 3-1 on the scorecard and are getting absolutely battered, taking more punishment than ever before. If this was an actual boxing match it would suggest that the bears are going to win the fight. Interestingly, that's sort of what we've seen when the S&P 500 gets beaten up the first four months of the year.

The lone time in which this didn't occur was from April of 2020, when the Federal Reserve pivoted toward maximum dovishness...the exact opposite of our current situation. Put simply, markets tend to act like the sports world; when you get off to a terrible start the odds of a terrible finish greatly increase.

Subjectively, we now have a breakdown on the monthly chart.

The S&P 500 closed April at a twelve-month closing low, which places a lower low on the monthly chart in terms of monthly closing prices. A primary downtrend is a derivative of a series of lower highs, lower lows, and lower closes over higher time frames like monthly charts. Well, the chart below has exactly that now, and it also sports a sort of "head and shoulders" pattern. 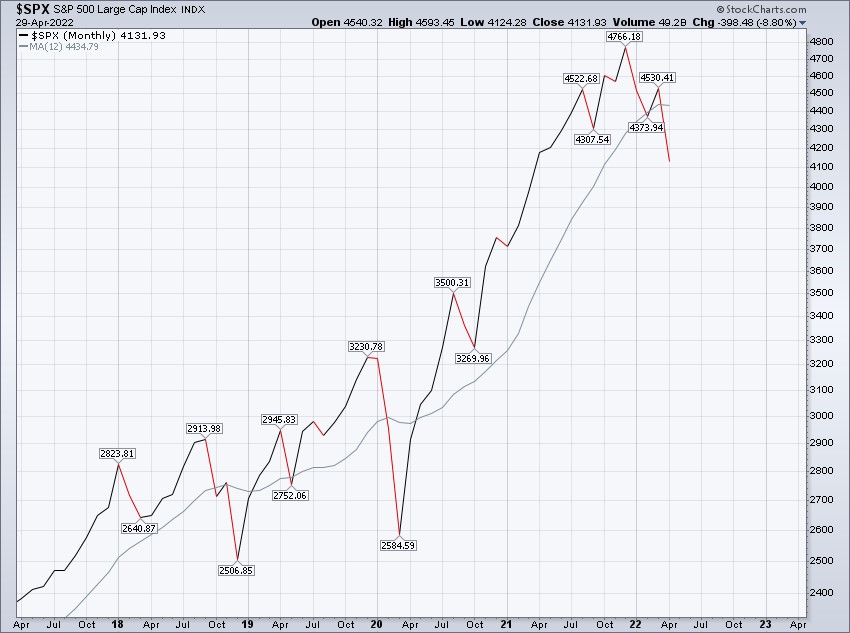 Ironically, the price target of the "head and shoulders" pattern on the monthly chart would suggest the S&P 500 heads down toward the ~3,600-3,700 price region at some point in 2022. It doesn't tell us when this will occur; the S&P 500 could easily trade back up toward the ~4,400 price region before heading down to ~3,600-3,700, but if we had to bet right now we'd bet that the S&P 500 does indeed trade down to 3,600-3,700 at some point in the third quarter (July-September). This would mark a standard 50% Fibonacci retracement when connecting the COVID monthly closing low with December of 2021's all-time high monthly close.

We'd find this rather normal, to be honest. After taking four gigantic steps forward, it's OK to take two steps back. 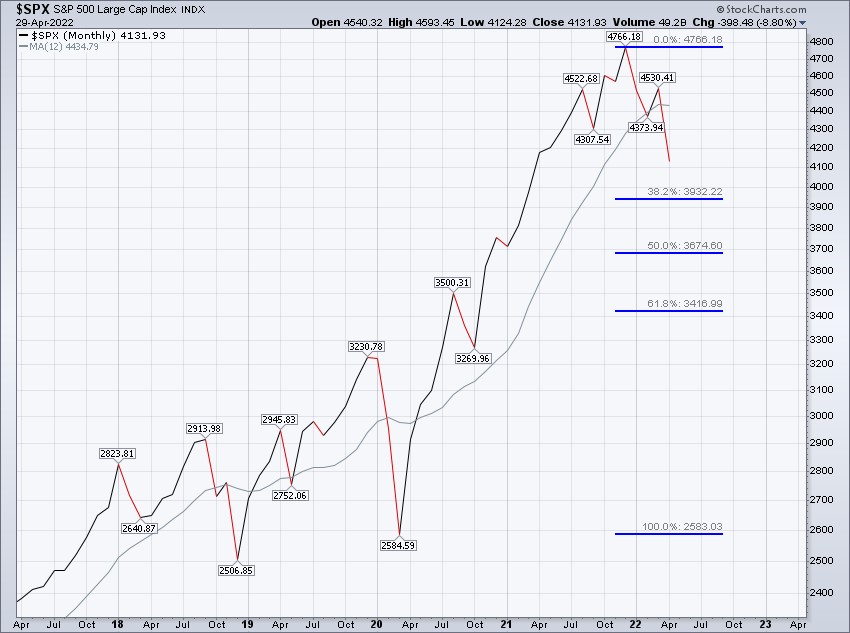 As we wrote last week, we think long-term investors are best served investing more conservatively at the present moment.

Cash is an asset class, and it's not a sin to hold a portion of your portfolio in cash. If we described the market climate last week as cloudy with a material chance of vicious thunderstorms, then it started to rain this week. Not a light rain either; we're talking about a good downpour. Ignore the risks of this downpour turning into vicious thunderstorms at your own peril.

During volatile market climates, long-term investors often have to wrestle with the decision to risk money (i.e., the risk of losing money by investing in stocks and/or bonds), or risk opportunity (i.e., the risk of not making money by not investing in stocks and/or bonds). All you can choose in the world of investing are the risks you're willing to accept. From there you can then incorporate a systematic risk management plan to guide whether you risk money or risk opportunity. At this point, virtually all prudent risk management plans will encourage long-term investors to risk losing opportunity more so than risk losing money. The choice is always yours!