Friday's close was a new all-time high daily and weekly close. The index actually started the year on shaky ground, falling -2.49% during Monday's session and trading down to 3,662.71. Monday recorded as a "bearish outside reversal" day, and a "bearish engulfing candlestick", leading us to wonder if the long-awaited pullback had finally arrived. But, as has been the case for months now, Monday's weakness was ultimately short-lived.

The S&P 500 went on to rise each and every trading day the remainder of the week, surging 3.35% from Monday's close through Friday's close, and leaving our weekly low on Monday for the fourth consecutive week in a row. As we wrote in our last Weekly Market Update:

"It's as if participants can't wait to buy 'em as soon as the market opens on Monday, especially if we're in the red."

What made the price action this week so impressive (and surprising) was how the S&P 500 somehow managed to dodge every single bullet thrown its way.

It was like Neo from the Matrix (click here). From Tuesday's somewhat surprising election results to Wednesday's disgusting storming of the Capitol to Friday's jobs report that revealed job losses last month (click here), the S&P 500 was bombarded with a plethora of new information that is often viewed as a catalyst to sell off. Instead, we put a four-day and nearly 4% winning streak on the board. Monday's "bearish outside reversal" day went on to finish as Friday's "bullish outside reversal" week. Go figure.

The primary trend remains up, or "bullish", across all time frames. Resistance will reveal itself at some point, there will be a pullback or a "correction", but the path of least resistance remains to the upside until the chart reveals some type of selling pressure. For now, we're absolutely enjoying the ride. 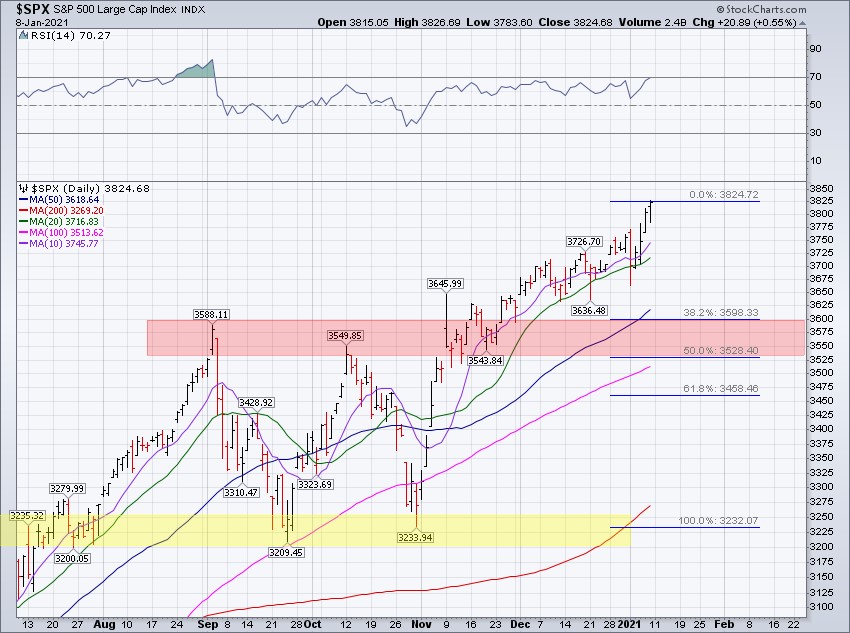 As for small-cap stocks, they picked up 2021 exactly how they left off 2020: absolutely ripping to the north.

The iShares Russell 2000 index fund (IWM) gained 5.95% this week with Friday's close at $207.72. IWM has now increased nine out of the last ten trading weeks and has gained 36.11% in the process. IWM gained ~4% on Wednesday alone, so clearly market participants believe Tuesday's light "blue wave" election results are a catapult to the most cyclical areas of the economy.

The breakout in IWM has been textbook: a multiyear base that finally hurdles well-defined resistance is analogous to breaking out of traffic and finding a left lane without a car in sight. IWM slammed on the gas. 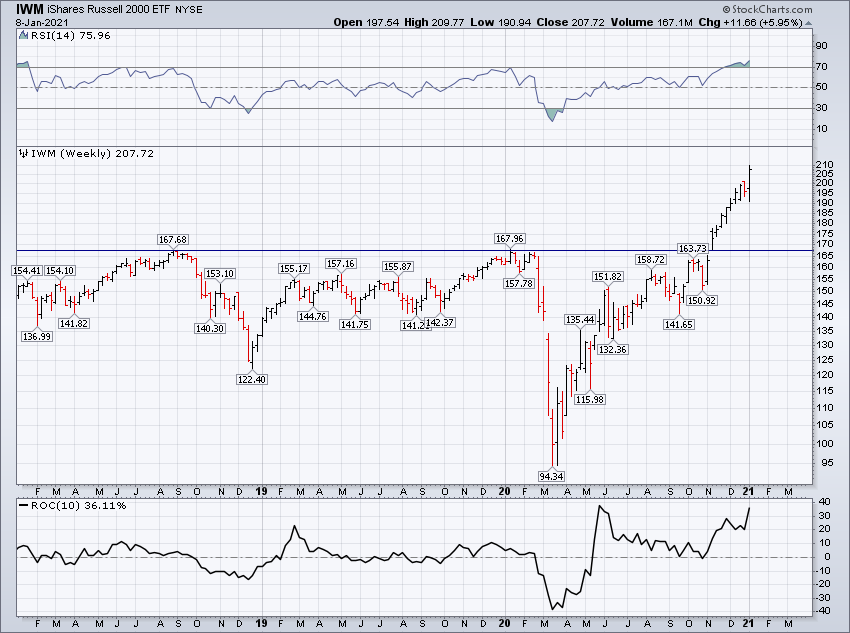 From a sector perspective, the S&P 500 energy sector (SPEN) led the charge this week, gaining a massive 9.31%. As we wrote in our last Update, maybe 2021 is the year for SPEN. Materials, consumer discretionary, financials, and healthcare all gained 3% or more for the week too. We're most intrigued by the financials here, since they're now in position to attempt to break out above decade-long highs. Maybe the financials can also slam on the gas then... 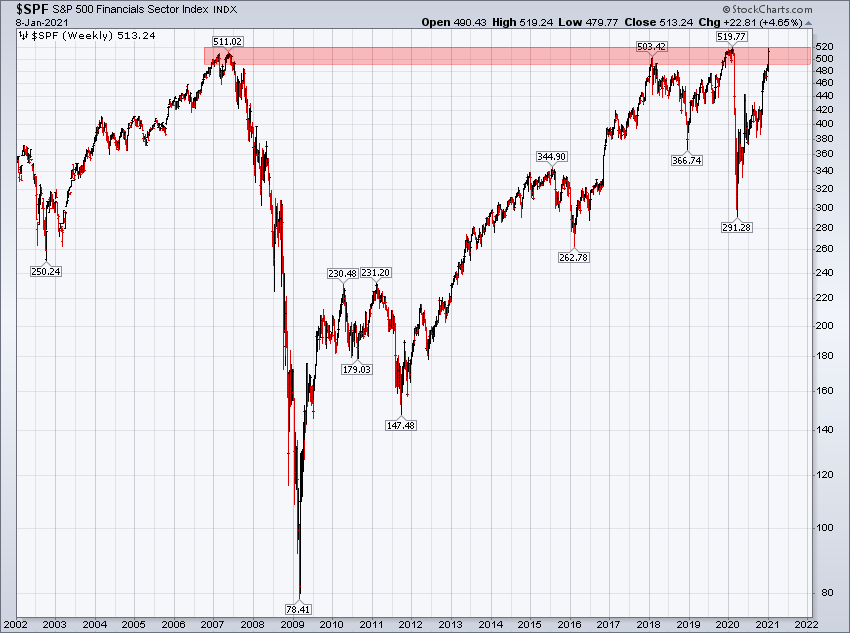 Interestingly, this price action this week, at least through one set of quantitative lenses, has generally been associated with some turbulence over the forward ten and twenty days. If we define the last five trading days as a -1% or more daily decline that's then immediately followed by a four-day winning streak that closes at a new all-time high, we're left with just nine prior instances since 1980. However, seven of the prior nine instances closed lower ten and twenty days later.

As always, something that's happened nine times over the last forty years has no significance for what's coming here in January of 2021. The price of the S&P 500 is going to go where it's going to go, but perhaps there is indeed a pullback on deck the back half of January.

The S&P 500's primary trend is undoubtedly defined as up or "bullish".

During uptrends, long-term investors are generally best served investing in the most traditional sense of the word. As we often write, the recipe for success during uptrends is to buy 'em and hold 'em, while also making sure you have a plan in place to identify when to fold 'em.

At the moment, those who have been able to buy 'em and hold 'em the last six months have been handsomely rewarded. And with the price of the S&P 500 at all-time highs, there's no evidence yet to suggest that continuing to hold 'em the next six months won't be rewarding too. 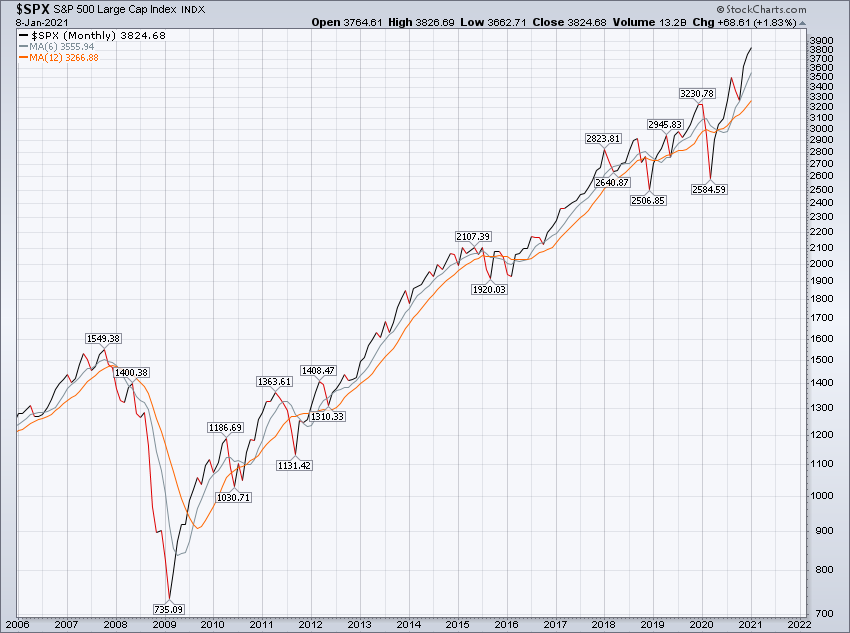 Now, we'd be remiss in not pointing out that there's been a ton of pain associated with long-term investors recording these returns. For passive investors, and even many active investment strategies, they've had to endure massive drawdowns, two unprecedented market crashes in a sense. However, one of the rules of trading, investing, or just life in general is...no pain, no gain. In order to make good money, we always have to risk good money. There's simply no other way. With markets roaring to the upside as if investing is risk-free, we'd simply like to remind you all that investing is never risk-free.

As we look at the year ahead, some fun figures about what we can expect:

If we actually reach both of these levels (a huge if), then the sequence of which level is hit first is impactful for long-term investors. It's unknowable, but it certainly feels like the traditional script is the most likely script: continued strength through the favorable period and turbulence during the unfavorable period. While there is evidence to support the idea of a pullback over the coming ten to twenty trading days, there's also evidence to support a positive first quarter of 2021.

The fourth quarter of 2020 gained 11.69%. Taking all fourth quarters that gained 10% or more since 1950 reveals that the subsequent first quarter of the next calendar year has then closed higher ten of eleven instances for average returns of 4.97%. The lone loser was a decline of -0.06%, so we're seven basis points away from a perfect first quarter when there's tremendous momentum to finish off the prior calendar year.

The yield associated with a 10-year United States Treasury bond increased by 20 percentage points, rising from 0.93% to 1.13%. In our last Update we titled a section "Interest Rates Ready To Boom, Too?". With the luxury of hindsight, the answer was yes.

An update from the chart we shared then. That's a clean breakout. There remains a bullseye at the ~1.3 - 1.4% marker. 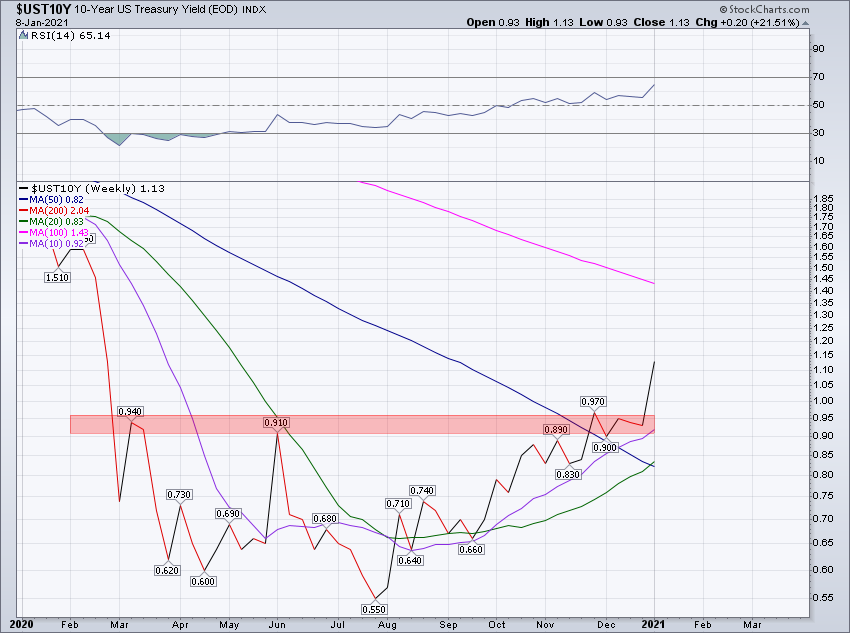 Rising yields were clearly no help to gold this week. The metal declined -3.15% on the week, all of which was attributable to Friday's -4.09% decline. To be frank, the price action in gold is growing frustrating. The metal recently held critical support via its 50-week simple moving average (50MA), but this week leaves the metal basically unchanged since July of 2020.

Gold has worked off any and all "overbought" conditions following the summer of 2020's rocket launch. After bottoming in November at its 50MA we felt that the conditions were "right", but the metal is yet to truly "ignite", especially after this week's plunge. If the reflation trade is a thing and participants believe the Fed will be successful running negative real rates (i.e., the rate of inflation persistently above treasury yields), then gold needs to get its act together and soon. 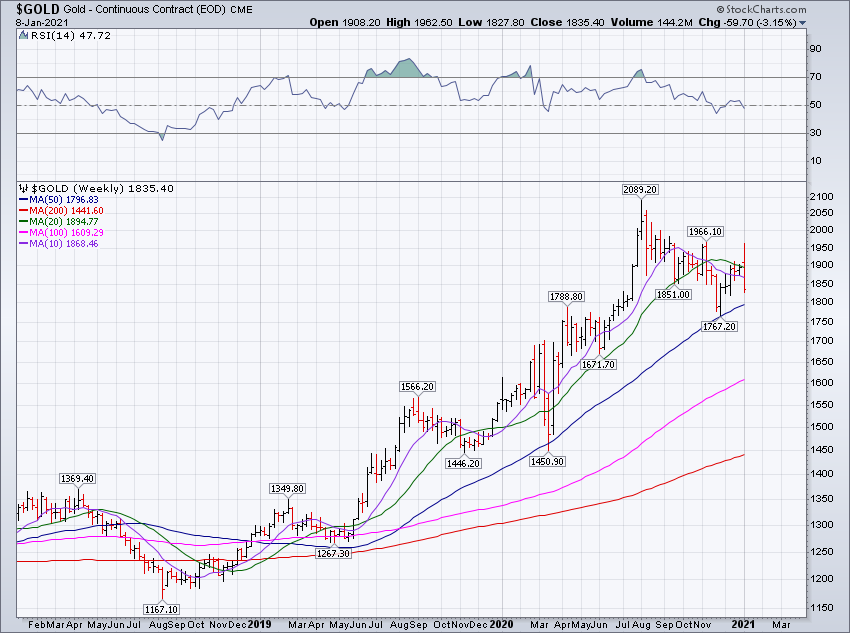 Another Update, another section on Bitcoin (BTC). Why? Because Bitcoin is still booming. Bitcoin is certainty challenging the idea that prices don't move linearly forever. The cryptocurrency's weekly RSI(14) presently records at 95.30(!). A reading of 100 is not mathematically possible, but the price action in BTC is certainly trying to make it a reality. When the music stops here, the retracement is going to be spectacular to watch. 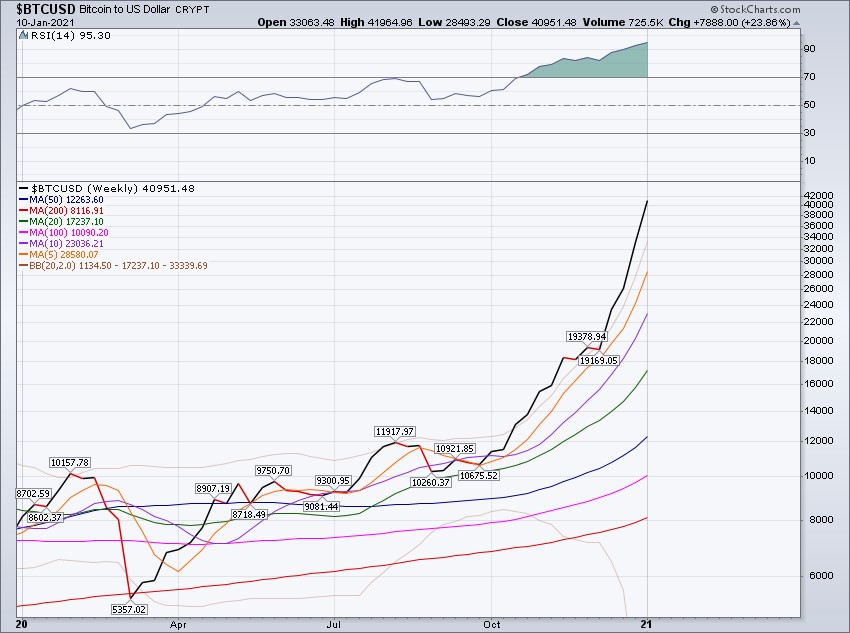