We hope you have a very nice Father's Day!

The index traded up to a new all-time high at 4,257.16 during Tuesday's session, but it was all downhill from there. The S&P 500 didn't exactly love what Federal Reserve Chairman Jerome Powell had to say on Wednesday (click here), but it clearly hated what St. Louis Federal Reserve President Jim Bullard had to say on Friday. He seemed to hint that the punch bowl is being taken away sooner rather than later (click here).

The S&P 500 didn't pass the "3% rule", it didn't pass the "4-day rule", and if it was 2nd and goal from the half-yard line last Sunday then it's now 3rd and goal from the five-yard line. We're going the wrong way here, and there's always the risk of a turnover. We wouldn't necessarily call the price action this week a "whipsaw", but the answer to the question we wrote last week ("will "they" buy 'em or will "they" sell 'em") was clearly that they'd sell 'em.

The question now is when and at what price will "they" step up and buy 'em.

As is often the case, the answer is unknowable as of today. Anyone who claims to know with complete and total conviction is just desperate for attention, in our view. There are always two sides to a story, and in this case there is evidence to suggest buying interest will emerge over the week ahead, and there is evidence to suggest that seasonal headwinds will bring further selling pressure over the coming week, pushing out any hopes of a lasting bottom into early July. When we put the pieces of the puzzle together, this week's price action leaves us with the good, the bad, and the ugly. Lets review all three.

The S&P 500 closed the week right at support across a multitude of time frames. The 120-minute (2-hour) chart shows the S&P 500 face-to-face with its 200-period simple moving average (solid blue line). Note how this moving average has appeared as magical support for all of 2021, halting selloffs dead in their tracks and marking pivots to the upside. 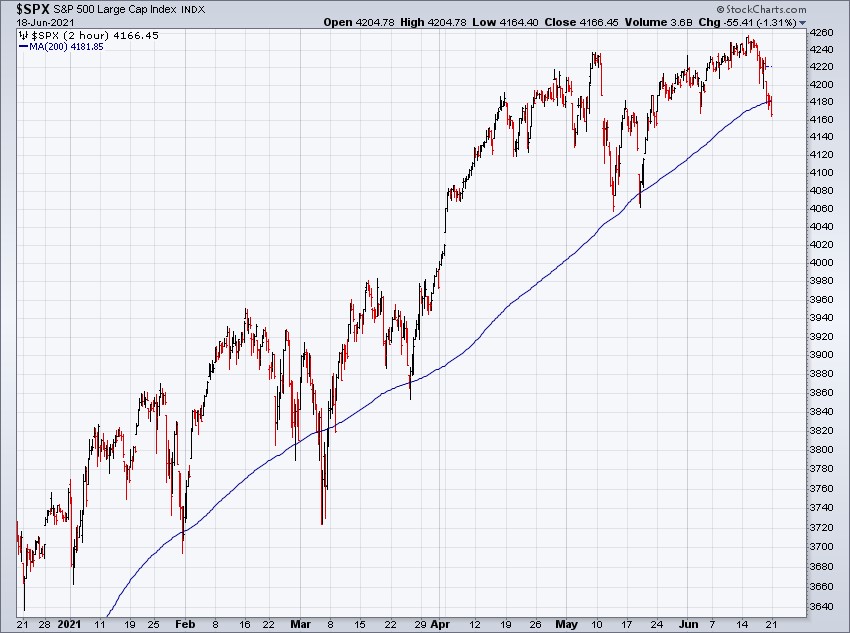 The daily chart shows the S&P 500 face-to-face with its 50-day simple moving average (50MA), which has also appeared magical for all of 2021 thus far (yellow highlights). Friday marked just the third trading day in 2021 to see the S&P 500 close below its 50MA. Each of the last two instances saw the S&P 500 immediately reverse course and move to the upside just one trading day later. In other words, the S&P 500 hasn't closed two consecutive trading days below its 50MA all year long. So, we'll sort of know if "this time is different" on Monday. 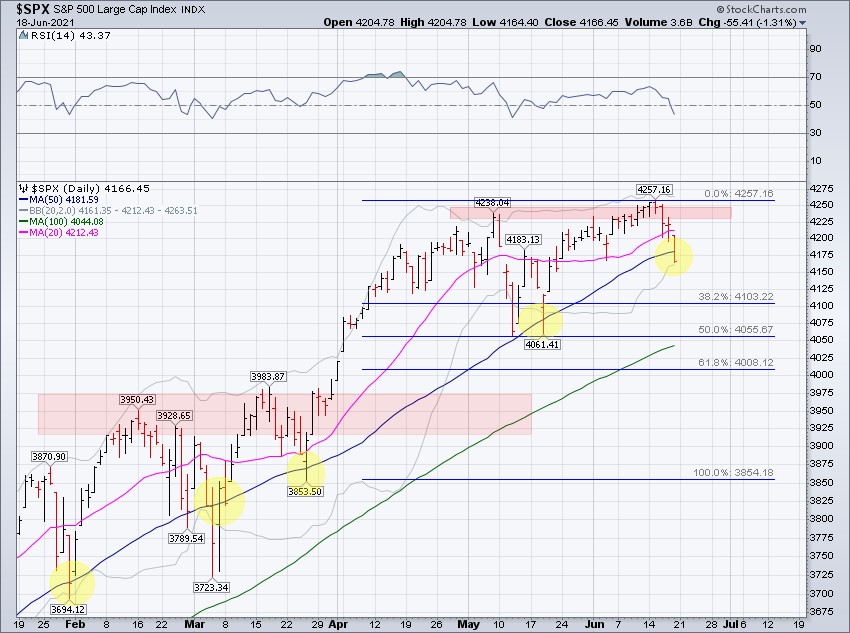 Quantitatively, this week recorded as a quick, sharp, yet somewhat normal selloff from all-time highs, at least in terms of magnitude. We closed Monday at a new all-time high and then immediately embarked on a four-day losing streak that took -2.08% off the value of the index. To some, it may have felt like -20.08% given the dispersion in sector performance this week (more on this below in the "Ugly" section), but the reality is that the S&P 500's four-day losing streak this week wasn't all that vicious.

Since 1990, we have 17 prior instances where the S&P 500 recorded a five-day pattern defined as an all-time high daily close immediately followed by a four-day losing streak that declines between -1% and -4%. Fourteen out of seventeen instances then saw the S&P 500 close higher two and five trading days later on average by 0.31% and 1% respectively. As of Friday's close it felt like everyone is expecting further spillover into Monday's session, but perhaps there's a "turnaround Tuesday" on deck for the week ahead. Regardless, the precedent regarding the S&P 500's forward price action following the pattern we recorded this week certainly isn't all that negative.

The last of the good came from the performance of the largest sector within the S&P 500, the technology sector. The S&P 500 Technology Sector Index (SPT) gained 0.09% for the week, the lone sector to finish the week in the green. SPT has now increased five weeks in a row, and when the best player on your team is playing this well it definitely helps mask some of the underperformance from the other players on the team. Quite frankly, the main reason the S&P 500 didn't record a vicious selloff this week was because of how well SPT hung in there.

When looking at the cross-asset class currents this week it paints a picture of "risk-off" behavior from market participants. Lumber cratered -15.23%, copper fell -8.39%, gold fell -5.88%, cryptocurrencies got clobbered. Perhaps most importantly, the United States Dollar Index (USD) surged 1.83%, its best week since September of 2020. The narrative there being that perhaps the Federal Reserve will be a bit kinder to the USD forward-looking. And long-term Treasury bonds recorded their second consecutive fantastic week. The iShares 20+ Treasury Bond ETF (ticker symbol TLT) gained 2.40%. TLT has now gained 4.17% total over the last two weeks, its best two- week stretch since last summer. If our future includes continued strengthening in the dollar, and an eager bid for long-term Treasury bonds that are yielding a shade above 2%, then that's a bit of an ominous sign.

The "reopening trade" got absolutely crushed this week. The financial sector fell -6.20%, materials declined -6.25%, energy fell -5.40%. In terms of sectors, this week was a mirror image of last week and the dominant price action from last year; technology and consumer discretionary leading the way and everything else lagging way behind.

We saw the same bifurcation in price action last week and we wrote that "it looks like this week showed a bit of hesitance regarding the idea of an "economic bonanza" in our near future". This week only furthers the hesitance. We do believe this hesitance will prove transitory (pun intended), but for this week the gigantic dispersion across the performance of the sectors within the S&P 500 was an ugly sign.

Finally, we have a rather ugly seasonal headwind dead ahead. The great Wayne Whaley shared how the S&P 500 has closed lower from 6/19 through 6/26 14 years in a row and 25 of the last 30 years. Average declines are -1.19%, so more red on the screen this week wouldn't exactly be surprising. 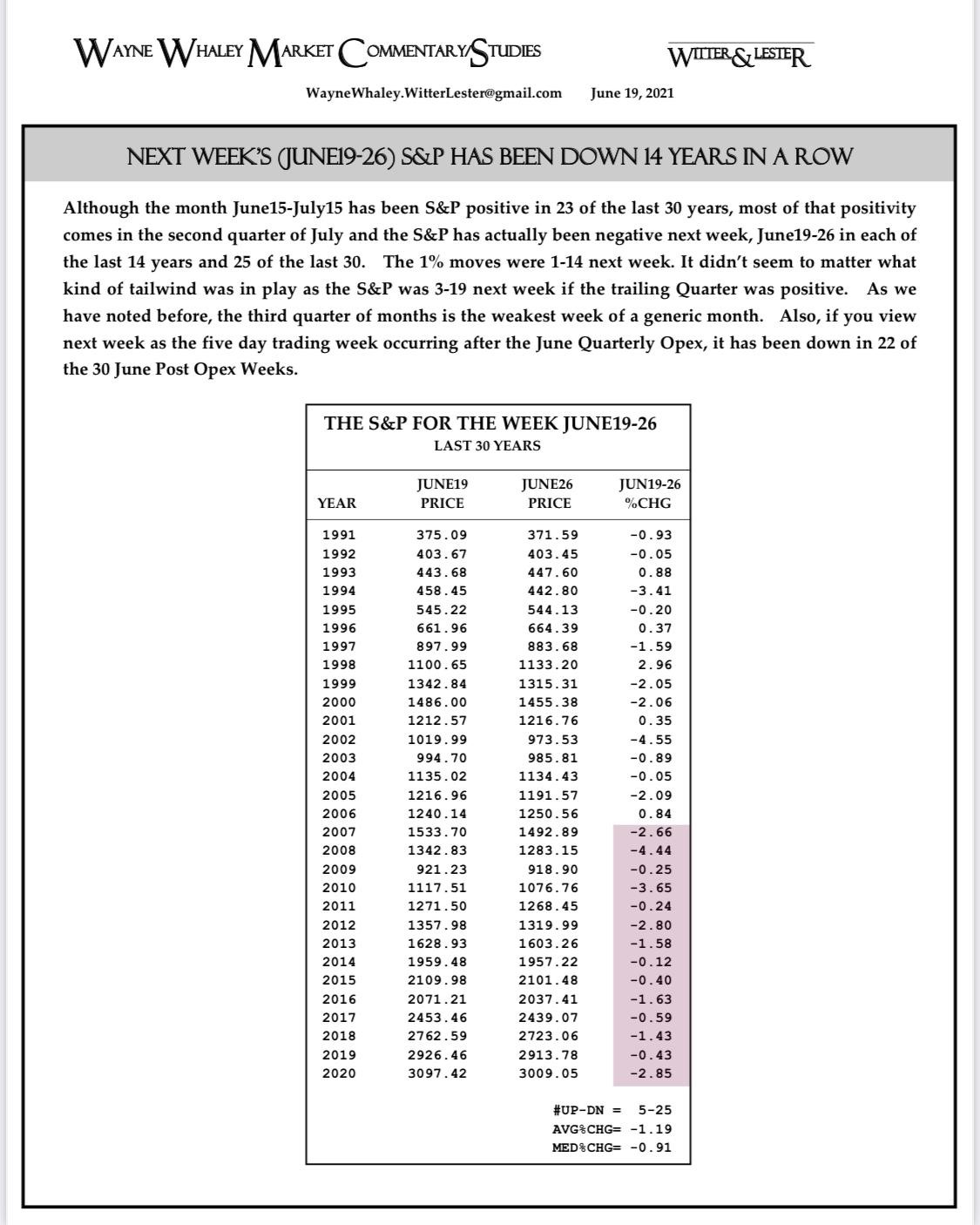 With the S&P 500 now completely unchanged since mid-April, it appears participants are reassessing, or attempting to "correct", their expectations of what lies ahead. What was once perceived to be a Goldilocks climate of tremendous fiscal support, the easiest of monetary policy for years to come combined with a sustained surge in consumer activity given our economic "reopening", appears to have come into question (thus the S&P 500's inability to break out to decisive new all-time highs). This has led the S&P 500 to "correct" through time, rather than a traditional -10% price decline (as of now at least), and creates a bit of a cloudy picture over the near term.

Our work continues to label the primary trend as up or "bullish".

We're all for managing risk, but risk has to reveal itself first in order to be managed. Given the speed at which modern markets tend to turn "off", risk can reveal itself as fast as Usain Bolt. But that's pure conjecture at the moment, and we're most certainty not there yet (especially when leading economic indicators come in like they did this week, click here).

No matter how one chooses to define the primary trend for the S&P 500, whether using short- or long-term momentum, relative momentum, trend channels or any other quantitative "signal", the primary trend is still labeled as up. It's during these times where investors need to manage themselves and remember that the best antidote to short-term volatility (and the uncertainty it creates) is a sound long-term investing plan (and the certainty it creates). 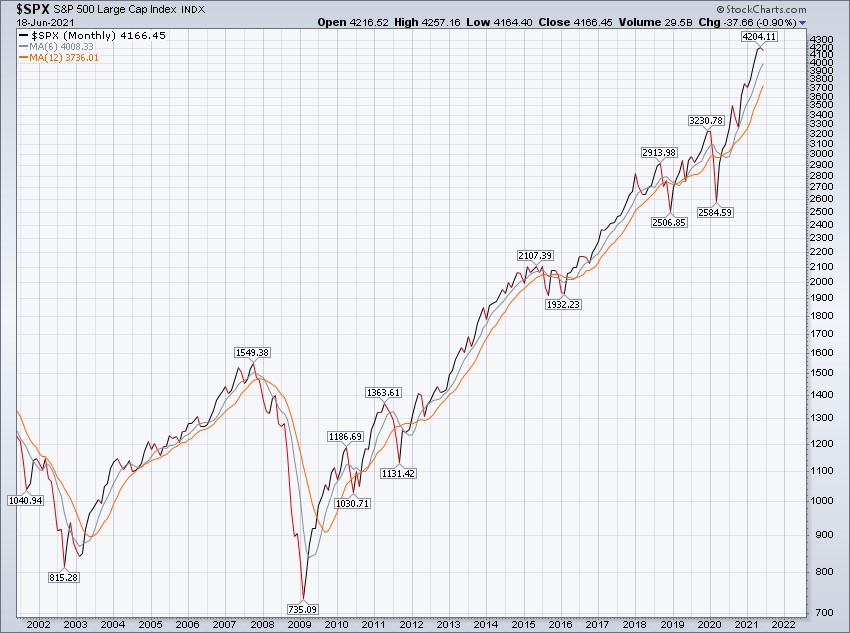 We wrote last week how the remainder of June's price action was rather pivotal. Sustained strength would set off a bevvy of "bullish" precedents that would strengthen the case for much higher highs over the forward one year. Alternatively, weakness would change the narrative:

"...should we finish June in the red the narrative will then be the emergence of eager selling pressure into all-time high prices for the index. The "bears" will have put up a goal-line stand. Given the run the index has been on heading into June this won't necessarily be a "bearish" thing, but it will at least record as a sign of distribution and remind long-term investors that the investing journey isn't always this easy."

Our curiosity got the best of us, so we decided to see what the picture would look like if we finish the month of June in the red. We identified all other time periods where a four-month winning streak managed to set new all-time highs in month five, but failed to record a five-month winning streak. We've seen this five-month pattern 12 prior times since 1970. Ironically, the selling pressure the S&P 500 has experienced in month five has generally been temporary and just a shakeout; the index has never closed lower six months later after recording this five-month pattern. The S&P 500 has closed higher six months later 12 out of 12 times for average returns of 8.68%.

We'd be remiss in not pointing out that each of the last two times this pattern occurred (September 2020 and January 2020) there was continued selling pressure the very next month. And as we always mention, the past can't possibly be used to consistently predict the future, especially when there are only 12 instances of something happening the last fifty-plus years.

However, history can be used to dispel a "bearish" thesis. For example, if someone is of the opinion that a red close in the month of June is a sign of things to come, and therefore predicting a "bear market" is near because "they" sold 'em in June, the table above can be used to prove them wrong.

So for now, we continue to believe the best course of action is to sit on your hands and exercise patience over panic. But as always, we reserve the right to change our opinion in next week's Update.