The open of the week ultimately recorded as the high of the week, and that's a hallmark of a week to forget. In last week's Update we were optimistic about the final week of October, and our optimism was certainly misplaced.

This week was an ugly "sucker punch", and the most recent example of the S&P 500 trading as if it has an on/off switch. All eleven sectors of the S&P 500 closed lower by at least -3.66% with the consumer discretionary sector being the worst performer, declining -6.55% This week now marks the worst finish to the month of October over the last 30 years, and it's certainly the worst final week of October during election years over that same time span. 2020 continues to rewrite the record books, mostly not in a good way.

While we never truly know why the S&P 500 does what it does, the most impactful "new" information that came forward this week was the coronavirus influencing many countries' decision to lockdown (click here).

For a market that's already dealing with the uncertainty surrounding the election, and the uncertainty regarding what the next round of fiscal stimulus is going to look like, it's easy for us to believe that participants took this week to "correct" their assessment over the probability and/or impact of another shutdown. As we've often written, uncertainty is the mother of volatility, and there was plenty of volatility this week. The Volatility Index (VIX) exploded higher by 10.47 percentage points, or 38%, to close the week at 38.02, its highest weekly close since April.

So, where are we now? Well, we're hanging on by a thread. The index didn't break down below September's low this week, that's the good news. But the bad news is that it took a furious rally over just the final five minutes of trading on Friday to find a tiny bit of separation. A furious rally over five minutes is often attributed to short covering, so it's hard to have conviction that the tape truly ignited into Friday's close.

The overall pattern has now developed into a rectangle, a sideways trading range confined between clear levels of support and resistance.

Resistance lies in the ~3,550-3,580 price region (red shaded area below) while support comes in between ~3,200-3,250. Rectangles are notoriously difficult to forecast, and about the only thing we got right in last week's Update was that the forecast over the short term remains cloudy, and this week didn't do anything to clear the clouds. 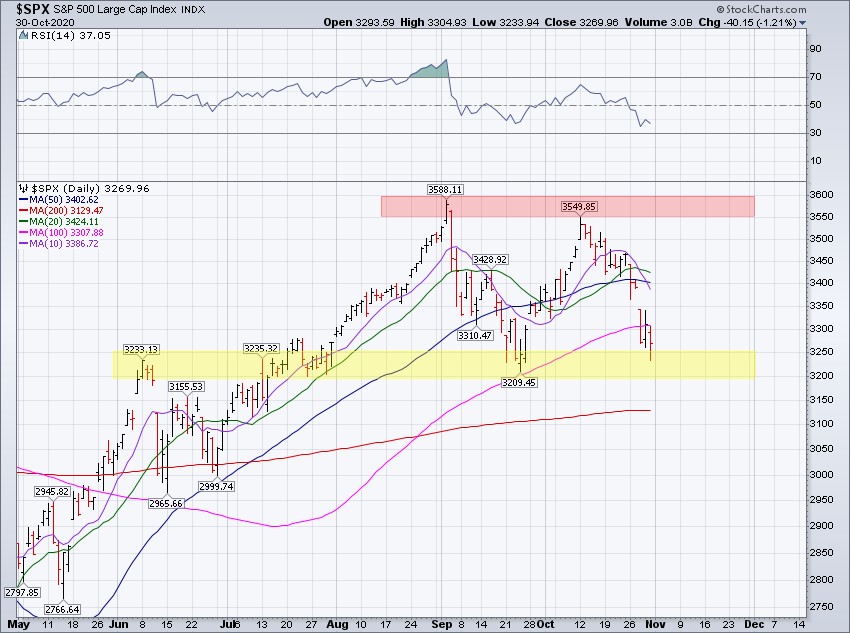 If we quantify large weekly declines for the S&P 500, we'd define this week as a calendar week that declines -4% or more while also closing within -10% of our all-time high weekly close. Since 1990, there are only 13 prior weeks that match, and the S&P 500's behavior over the forward one month has been rather volatile. The most recent sample came from slightly more than two years ago and the index went on to decline an additional -5.91% the coming two weeks, analogous to the S&P 500 trading down to ~3,075 the front half of November.

In aggregate, the index has traded in a +/- 4% range over the forward one month after trading weeks like the one we just saw, which is suggestive of a November range between ~3,138 and ~3,400. The sequence of which price level comes first is obviously the key. A trade down toward ~3,138 sooner rather than later would mark a test of our 200-day simple moving average (solid red line on the chart above). Should we then bounce back to ~3,400 that test would obviously be viewed favorably.

Alternatively, should we climb to ~3,400 sooner rather than later, and then trade down toward ~3,138 the back half of November, that will perpetuate the idea of the trading range breaking to the downside. We much prefer the former scenario rather than the latter. Recall in 2016 that the S&P 500 bounced right off of the 200-day simple moving average just prior to the election (yellow highlight on the chart below). Perhaps there's a case of deja vu here for early November. 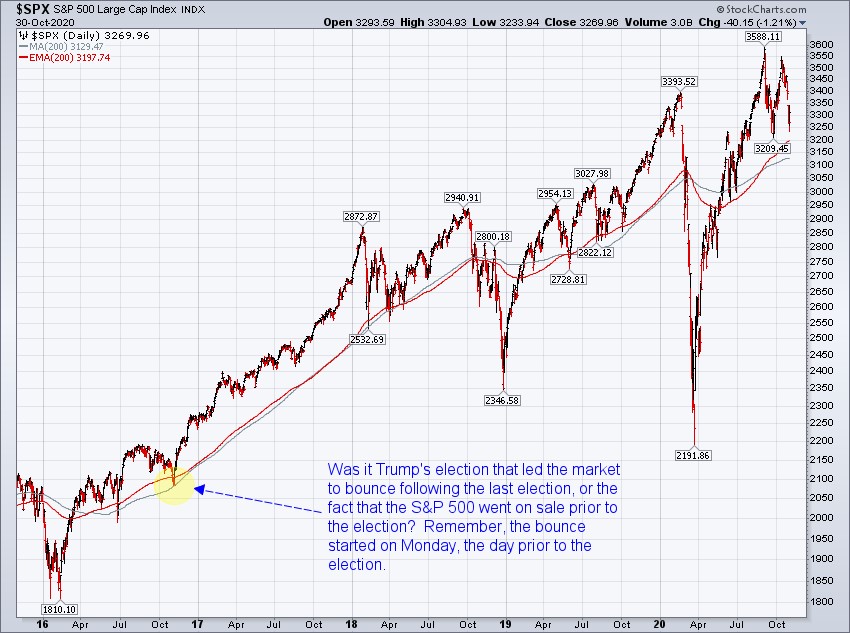 Finally, volatility earthquakes of this magnitude have almost always served to create a boom or bust scenario for the S&P 500 over the short term.

Can the S&P 500 absolutely skyrocket out of the gates on Monday and never look back? Of course. Can the S&P 500 crash following the election on Tuesday? Sure. Anything is always possible, and when the Volatility Index is knocking on the door of 40, and finishes the week above its upper weekly Bollinger Band, things have generally gotten crazy one way or the other over the forward one month.

For example, the last two times we saw this happen were the weeks ending February 28th, 2020 and December 21st, 2018. The S&P 500 went on to close lower by -13.97% four weeks following the former, and the index went on to close higher by 10.51% four weeks after the latter. That's the epitome of boom or bust. Ironically, we have two catalysts dead ahead - Election Day 2020 and the single largest number of coronavirus cases reported in a single day across the world (click here). An exciting and uncertain week lies ahead.

From a market perspective, the month of October lost because market participants, collectively, were far more eager to sell than buy the constituents within the S&P 500, and derivatives tied to the S&P 500. The key question is whether their eagerness to sell is temporary, based on the transitory uncertainties, or whether there is something more worrisome being priced in at the moment. We believe it's far more likely that we're witnessing a "correction" in both time and price rather than the start of another swoon or "bear market", but that's almost always the stance we'll take since "corrections" are so much more common than "bear markets". Nonetheless, the month of November is going to be rather pivotal because months like October only further the boom or bust predicament we find ourselves in.

Define October as a calendar month that traded up by 5% or more at some point during the month, only to then finish the month in the red, and we're left with a who's who of volatile market climates the very next month. Since 1950, there are only 9 calendar months that match the definition of October, and the S&P 500's return the very next month has been totally wild. Five of the nine instances saw the S&P 500 decline -7.78% or more, with four of the five declining double digits. Two of the nine saw the S&P 500 gain 8.54% or more, thus seven of the nine have absolute returns of greater than 7.78%.

Quite frankly, we've never seen a study zoom in on such volatile months only one month later.

Ironically, October is the third calendar month in 2020 to trade up by 5% or more and then finish the month in the red, after there being only 6 such calendar months the preceding 70 calendar years. The others were February and March of 2020. March saw the S&P 500 bust, April saw the S&P 500 boom. I suppose if we were to title this week's Update we'd call it "Boom or Bust".

From an investing perspective, the primary trend remains best defined as up or "bullish". However, the chart reminds us of an old phrase:

"A top is a top until its not"

Nothing good can happen below 3,500 for the S&P 500. Below 3,500 and at best the index is trading sideways, at worst its price is declining. At the moment, the monthly chart is testing the concept of old resistance, once broken, becoming new support. November's been a favorable month both over the last 30 years (higher 23, lower 7) and during election years where the month has closed higher each election year since 2000. 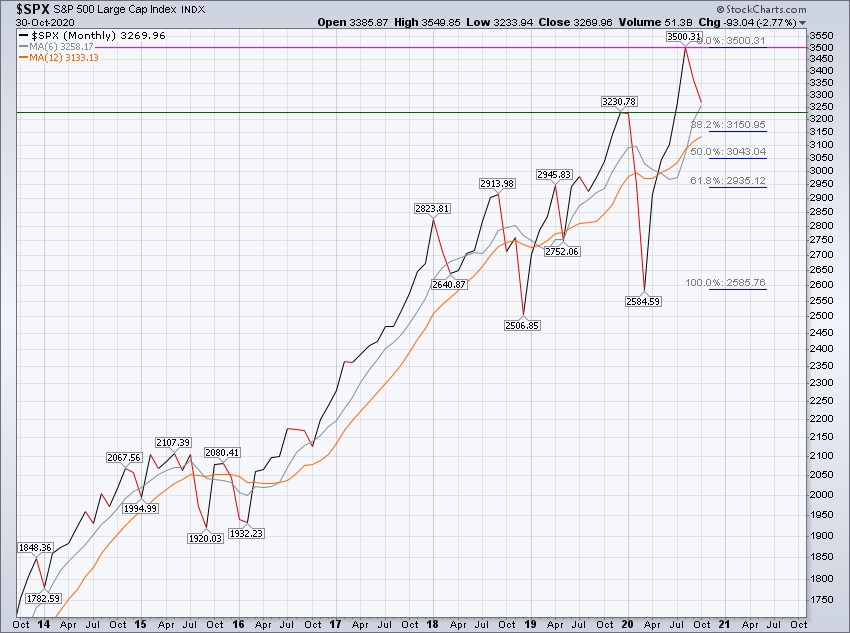 Finally, it's reasonable to expect continued volatility over the weeks ahead. Volatility tugs at our emotions and often convinces us to "do something" with our investment portfolio. It's important to understand that our desire to "do something" is almost always driven by the returns our portfolio is experiencing, and that is something no investor can control. We just can't "do something" to fix it.

What we can do is understand that the returns our portfolio is experiencing is temporary, transitory, and attributable to high volatility. We can embrace a dispassionate view that understands that while we can't control our portfolio's returns in the short term, we can control our ability to adhere to our long-term investing plan in order to generate strong returns over the long term. There is a decent chance we're all going to want to panic in November. Consider this as our reminder that panic rarely pays off, and patience has always paid off.

Diversification? A Lot Down In October

As the community of long-term investors receive their monthly statements over the week ahead, they're all likely to see a "Red October".

Not only did the S&P 500 decline in October, but so too did long-term Treasury bonds and gold. Across the traditional investable universe there was almost no place to hide in the month of October, virtually everything went down (excluding small cap stocks and Bitcoin, ironically). 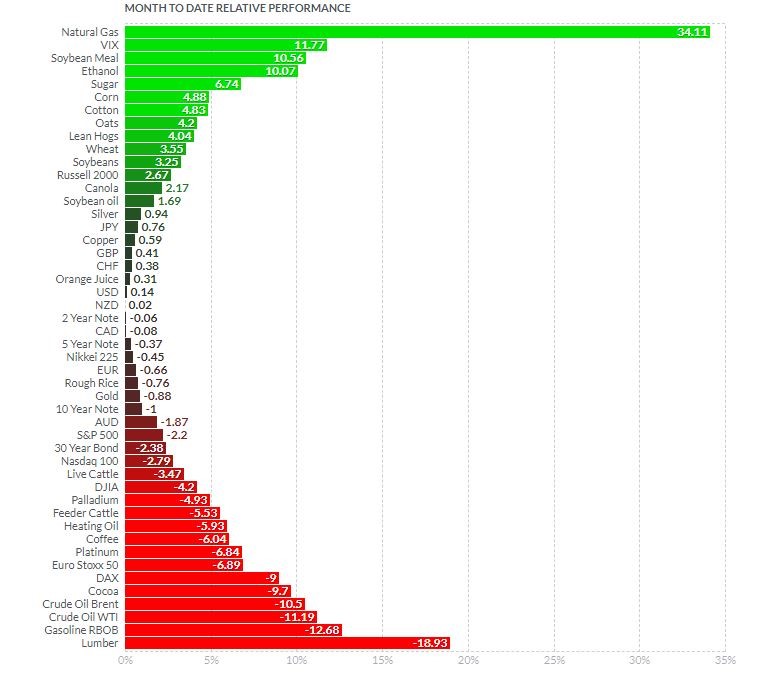