The index opened the week on slippery footing, trading down to 2,965.66, only to then quickly reverse to the upside.  In last week's Update we wrote that we thought the S&P 500 would trade below 2,984.47 at some point during the week, and that trading down into the ~2,900-2,950 region would mark at an "obvious area of meaningful "support" over the week ahead".  That's sort of what transpired this week.

The index would go on to close Monday's session at 3,066.59, more than 100 points above its daily low.  By Tuesday, the S&P 500 reached as high as 3,153.45, nearly 200 points above Monday's low, and it appeared the index was once again going to erase a sharp, fast, violent pullback in just a matter of days, something we felt was "unreasonable" in last week's Update.  It felt exactly like April and May's low all over again.

We then saw a slight rally into Friday's close, finishing the week at 3,097.74 for the spot price of the S&P 500 index itself - but - the S&P 500 September futures contract would plunge immediately following the closing bell, finishing the week at 3,058.00, and indicating a negative opening for the Sunday night session.  The technicalities in the disparity between the price action in the S&P 500 futures market relative to the cash index are enough for a 1,000+ word article in and of itself, but the most important takeaway we'd share is that the price action this week was fragile, borderline unstable.

Updating the chart we've been sharing from the last few weeks, this week's move higher is straight out of the textbook, specifically the chapter that reads "prior resistance becomes future support".  Former resistance at the ~2,954 and ~2,945 price region became support at the ~2,965 level. 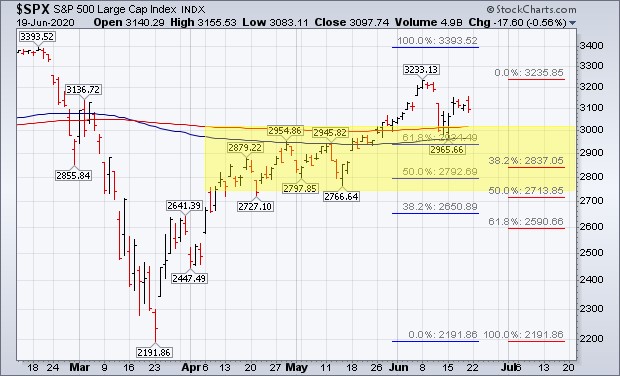 As we look to the week ahead, "inside weeks" aren't the norm and trading "outside" this week's range will require a move above 3,155, or below 2,965.  With Friday's spot close at 3,097, it would seem the path of least resistance is to the upside.  However, with the S&P 500 futures close at 3,058, the futures market sits almost exactly in the middle of this week's range.  Furthermore, there's a fairly strong seasonal headwind that would suggest Friday's downside reversal will find further momentum to the downside.

Both Charlie McElligott of Nomura and Wayne Whaley shared quantitative studies that show meaningful downside skew for the week following June's quarterly options expiration (i.e. the week ahead).  Both Charlie and Wayne studied the price action of the S&P 500 over the week following June's quarterly options expiration when the S&P 500 had traded positively over the trialing one-month period.  Charlie found that the S&P 500 was 2-15 (2 winners, 15 losers) for average declines of -1.2% over the week ahead. 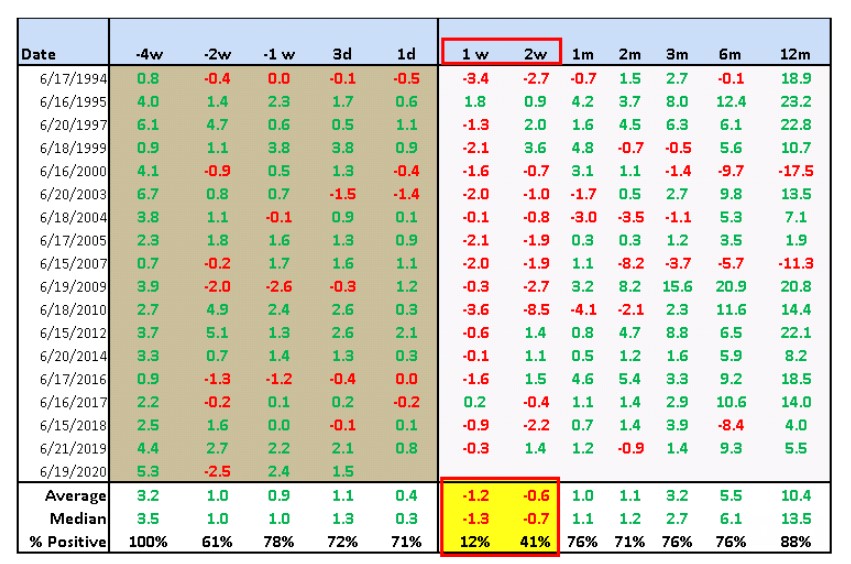 Wayne's work was slightly different than Charlie's, but it found the same downside bias.  Wayne measured the S&P 500's performance over the trailing 1-month period from 5/20 through 6/20 and observed that if the S&P 500 was higher during this trailing 1 month, the index was then lower from 6/20-6/27 100% of the time, all 18 instances, for average declines of --1.48% (www.witterlester.com to sign up for Wayne's work). 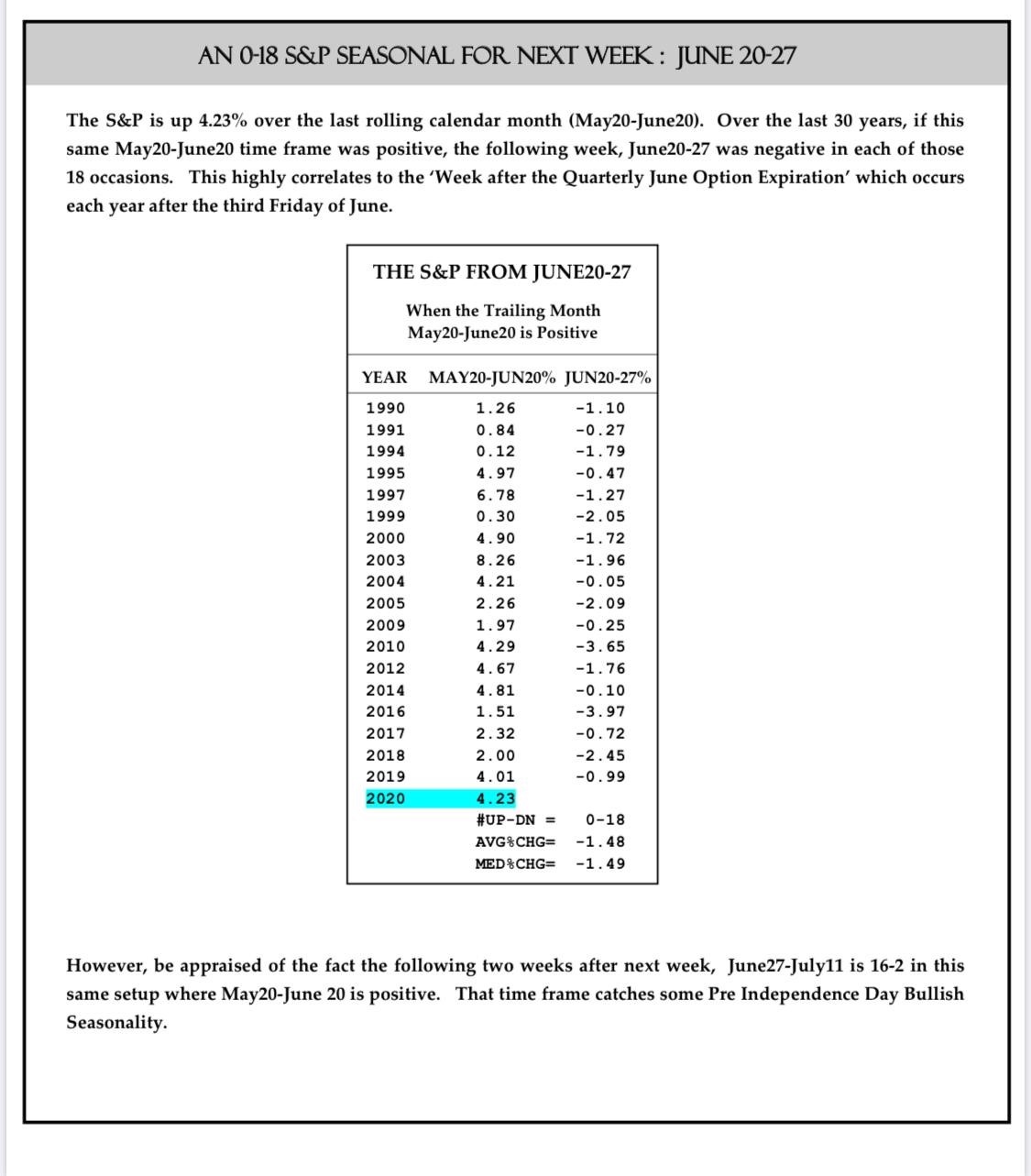 Friday also went in the books as "bearish outside reversal day" and a "bearish engulfing candlestick", and while these patterns aren't consistently predictive of anything, they do at least call out downside reversals, which often precede the price of the S&P 500 trading down in the short term.  With the VIX closing the week at 35.12, and pairing together Wayne's work, Charlie's work, and Friday's downside reversal, it appears the S&P 500 is sprinting into a headwind.  If the index can plow through this headwind, exemplified by closing the week ahead above 3,155.53, it will be a major sign of strength.  If the index can't get through this headwind, illustrated by the S&P 500 closing the week ahead below the 3,000 level, the market will then be doing what it does best...maximizing uncertainty.

Remember, the month of June was once higher by more than 6% and in position to close the month at a fresh all-time high monthly close.  Any selling pressure into month end will leave the month finishing in the red, a downside reversal the likes of which we've rarely ever seen (only 2 months in history have traded up 6% or more at some point during the month only to finish the month in the red).  This reversal would be coming at a time when uncertainty regarding the coronavirus is ascending, so much so that Apple is closing down some stores.  It's clear the S&P 500 has been pricing for perfection, forward-looking.  Anything that isn't perfect will undoubtedly fuel a "correction".

Alternatively, if the S&P 500 can find strength into month end, it will then record a top 5 highest monthly close in the history of the index.  The catalyst to the upside from here will probably be news-driven, i.e. advancing momentum re: the favorable implications of further stimulus.  The idea of an infrastructure bill gained momentum this week (click here), unsurprisingly given the prior week's plunge, and there's always a chance for more positive news.  Governments and central banks are all in and sport a "whatever it takes" attitude in striving to knock out the recession and extend the economic expansion.  At the moment, it appears the market believes this "whatever it takes" attitude is going to knock out the recession,  otherwise the price of the S&P 500 wouldn't be sitting at ~3,100...

Yet another pivotal week awaits.

The S&P 500 is presently higher by 1.76% for the month of June.  There are 7 trading days remaining in the month, and as we wrote last week, we think there's valuable information in the price action that unfolds over the coming 7 days.  If we believe the collective actions of market participants in the present are a tell regarding their forward-looking expectations (regardless of the reason), then the next 7 days are as pivotal as it gets.  They're not the be-all and end-all, there's no such thing in the world of markets, but there has been a complete and total lack of selling pressure the last three months.

However, we now have uncertainty ascending for the conronavirus, the labor market via unemployment insurance benefits, and forward-looking earning expectations, all while the S&P 500 has recorded one of its best three-month periods of returns in the history of the index.

If participants aren't willing to sell 'em now, it begs the question of "if not now, when?"

The primary trend is presently labeled as "neutral" as the S&P 500 is confined between its all-time high monthly close at 3,230.78 and our 2020 monthly closing low at 2,584.59.  A negative close for June will further the idea of the S&P 500 being "stuck" in traffic between these two levels, whereas a monthly close in the vicinity of 3,230.78 will leave the S&P 500 in position to break out of the traffic and slam on the gas.  Pricing moving above the green horizontal line on the chart below is analogous to changing lanes from the congested middle lane to the wide open carpool lane.  You can step on the gas and get moving. 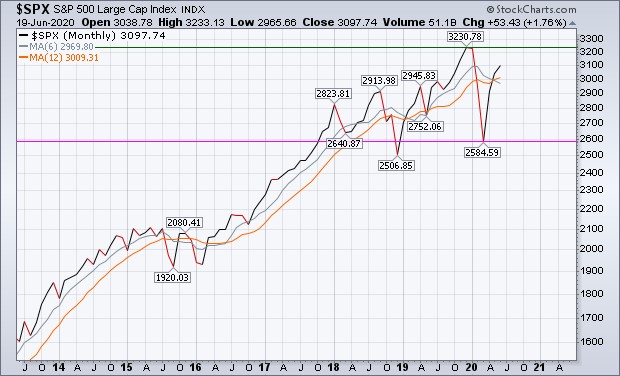 We believe long-term investors are best served aligning their asset allocation with the primary trends across asset classes, rather than adhering to one set asset allocation through all market climates.  However, determining the appropriate mix of asset classes to include in one's portfolio requires relative strength analysis, or comparing the performance of one asset class to another.

Making this relevant for June of 2020, the primary trend for both bonds/fixed income and gold is up, or "bullish".  While the S&P 500's monthly chart above lacks a discernible uptrend (i.e., a series of identifiable higher highs and higher lows), the monthly charts of both the bond market and gold sport clear primary uptrends.

Below is a monthly chart of the bond market, as measured by the iShares Core U.S. Aggregate Bond Fund (ticker symbol AGG). 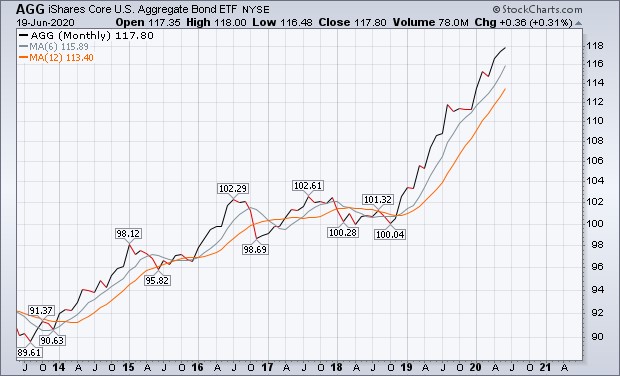 Here's a monthly chart of gold, as measured by the SPDR Gold Shares (ticker symbol GLD). 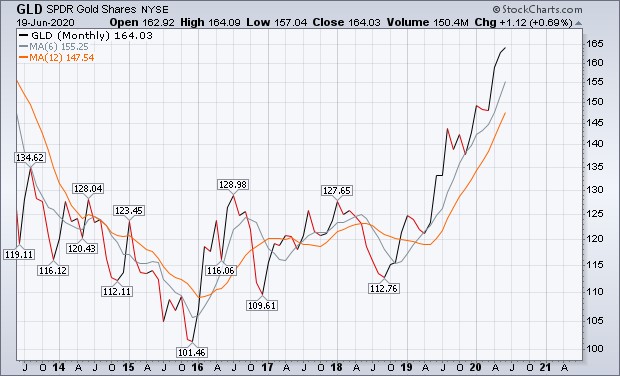 Comparing both AGG and GLD to the S&P 500 via the iShares S&P 500 Index Fund (ticker symbol IVV) reveals that both the bond market and gold have been underperforming stocks for years but have just now turned higher in 2020.  The question is whether they can sustain this relative strength, which is undoubtedly going to be influenced most by whether the S&P 500 can sustain its upward trajectory.

Here is AGG compared to IVV: 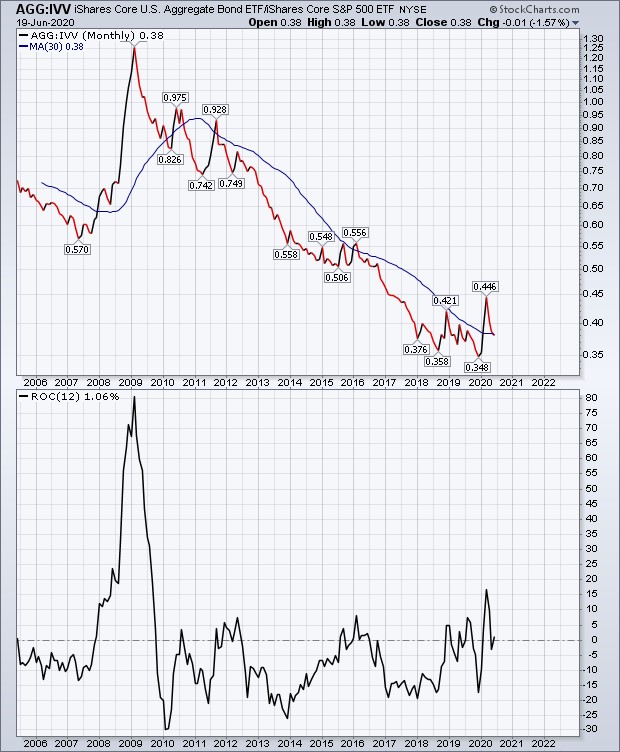 And GLD compared to IVV: 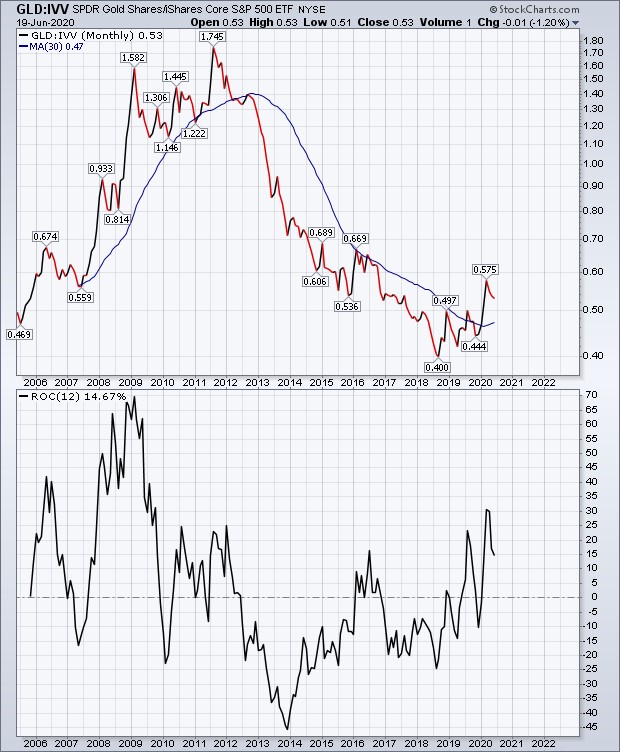 The takeaway is that at the moment, both AGG and GLD are slightly more attractive than the S&P 500, relatively speaking.

Therefore, including bonds and gold in your asset allocation is generally a prudent, intelligent, and defensible decision.  It's not until the primary trend for the S&P 500 relative to both bonds and gold changes to up, or "bullish" that long-term investors should probably seek to "overweight" stocks/equities.  That can happen as early as the end of June, or as late as years from now, nobody truly knows.

We've written a lot about the technology sector thus far in 2020 as it's the single biggest sector within the S&P 500, and its performance has been absolutely stellar for the year.  However, it was another area with "technology" in the name that took center stage this week, and that's the biotechnology sector.

Interestingly, the catalyst seems to be ascending uncertainty on the coronavirus front.  As the fear of an escalating first wave or a worse than expected second wave rises, IBB (and healthcare in general) seem to find eager buying interest as "defensive" sectors.  Whether this is a case of correlation or causation is anyone's guess, but the price action of IBB is very encouraging and would suggest meaningfully higher prices into the future. 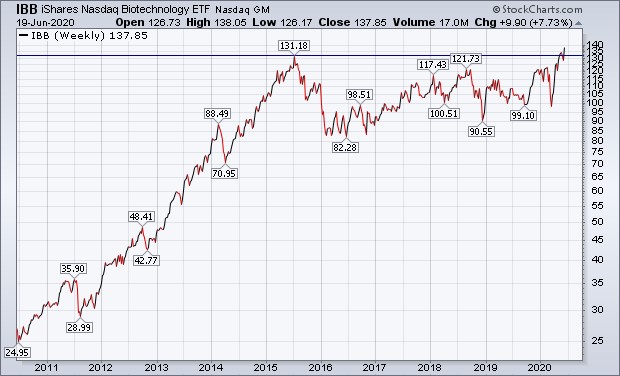 Updating the chart of the information technology sector (SPT) we shared last week, the Lebron James of the market found his shot and avoided a two-week losing streak.  SPT gained 2.79% this week with Friday's close at 1,793.72.  Friday's close is a new all-time high weekly close for SPT, although only by a hair.  SPT is now in prime position to break out, and given its weighting within the S&P 500, it will have the biggest impact in determining whether or not the S&P 500 finds upside, or downside, into the end of June. 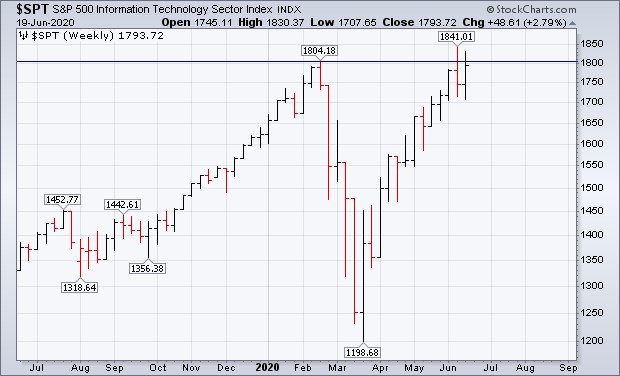