The index has now declined two weeks in a row for the first time since October of last year. We've often written how modern markets seem to trade as if there's an on/off switch, and the latest example is the index seemingly turning off on Friday, February 12th. After closing February 12th at a new all-time high daily close at 3,934.83, the S&P 500 has closed higher just two of the last nine trading days while declining -3.14% over that time span.

Ironically, things were feeling good on Wednesday. The S&P 500 traded as high as 3,928.65, a stone's throw away from our all-time high daily close, and closed Wednesday's session at 3,925.43, the fourth highest daily close in the history of the index. But resistance ultimately revealed itself yet again.

The S&P 500 traded down to its weekly low at 3,789.54 on Friday, marking a decline of -3.54% in a little more than one trading day. Friday attempted to rally nicely off the ~3,789.54 level, climbing as high as 3,861.08 just hours later, only to then stumble into Friday's close. Speaking of stumbling into the close, the month of February couldn't do anything differently than the month of January. For the second consecutive calendar month, we stumbled across the finish line (click here).

Where do things head from here? Well, the collective actions of market participants has an uncanny ability to maximize uncertainty, and right now we have no idea if the next 100 points for the S&P 500 are higher or lower. It feels like they're guaranteed to be lower, meaning we're destined to reach ~3,711 before ~3,911, but feelings are generally wrong (see feeling good on Wednesday).

Resistance has firmly planted itself in the ~3,930-3,950 region while support sits in the ~3,780-3,800 region, a confluence of support via the 50-day simple moving average and the 61.8% Fibonacci retracement when connecting January's low (3,694.7) to February's high (3,950.43). Until the price of the S&P 500 breaks and sustains "outside" of support or resistance everything is just noise. Loud noises, but noise nonetheless. 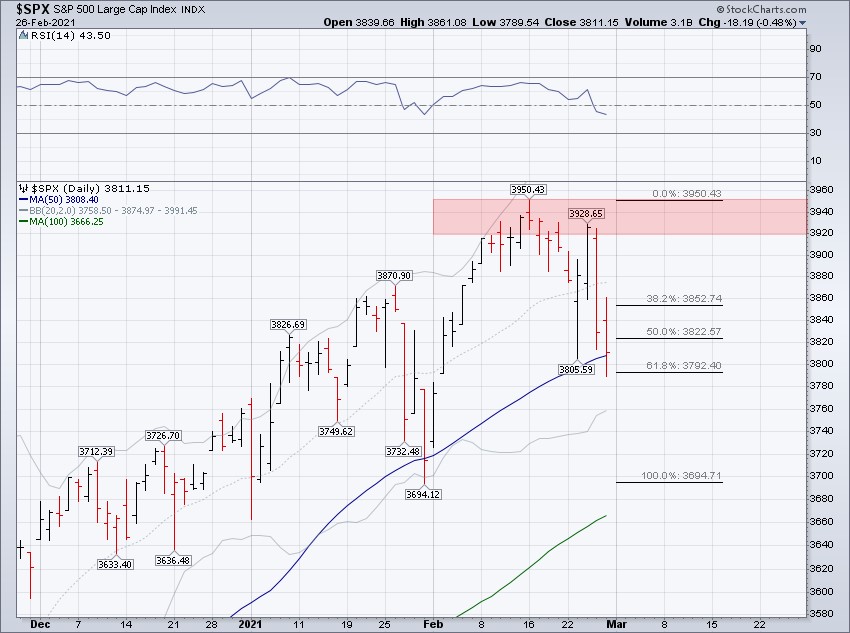 We never heard from President Biden this week, so the upside catalyst we discussed last week never materialized. Ironically, we will hear from Jerome Powell this week at the Wall Street Journal Jobs Summit on Thursday (click here). Given the year-to-date cratering in the bond market, it's a perfect time for some Fed jawboning.

The major narrative this week was indeed the rise in interest rates across the yield curve.

It's almost laughable to think 1.54% on UST10y and 2.33% on UST30y are enough to spook equity market participants, but the rate of change, or speed and linearity in which yields are rising is likely influencing the S&P 500's jitters. The price of UST30y has declined five weeks in a row, so it's been a one-way ticket to the upside for yields. This exacerbated the bifurcation in the performance of the sectors within the S&P 500 this week, furthering our conviction about the need for investors to have a "diversified, barbell-like approach toward equity allocations".

As we wrote last week, while the technology sector has carried the load for a long, long time, that's not going to be the case in the event where we truly have an economic bonanza on our hands, and bonds are pricing as if the economic bonanza is real.

Looking to the week ahead, the old phrase "all's well that ends well" once again comes to mind. All did not end well last week so we have an uneasy feeling heading into Monday. However, eighteen of the last twenty-four two-week losing streaks for the S&P 500 never became three-week losing streaks. So, even if the S&P 500 bends this week, hopefully it won't break. Between Powell on Thursday, and the jobs report on Friday, we'd like to see a strong finish to the week.

Lost in the shuffle of stumbling across the finish line is the fact that the S&P 500 won the month of February.

The index gained 2.61% for the month and closed the month at a new all-time high monthly close. February was different than January in this regard as we at least managed to hang on to some of our gains.

At its peak, the month of February was higher by 6.36%, so this is why finishing the month higher by just 2.61% feels like a letdown. Since 1970, there are twenty other calendar months that traded up by 5% or more at some point during the month, only to then leave investors feeling letdown by closing the month by less than 3% We'll title them "letdown months".

Ironically, we can file "letdown months" as something that's historically all bark and no bite.

There hasn't been anything overly "bearish", forward-looking, following calendar months that exhibited similar price action to what we saw in February. In fact, feeling letdown by "letdown months" is usually temporary and the S&P 500 gets right back to its winning ways. Three months after these twenty prior "letdown months" the S&P 500 closed higher sixteen of twenty times (80%) for average returns of +4.10%. 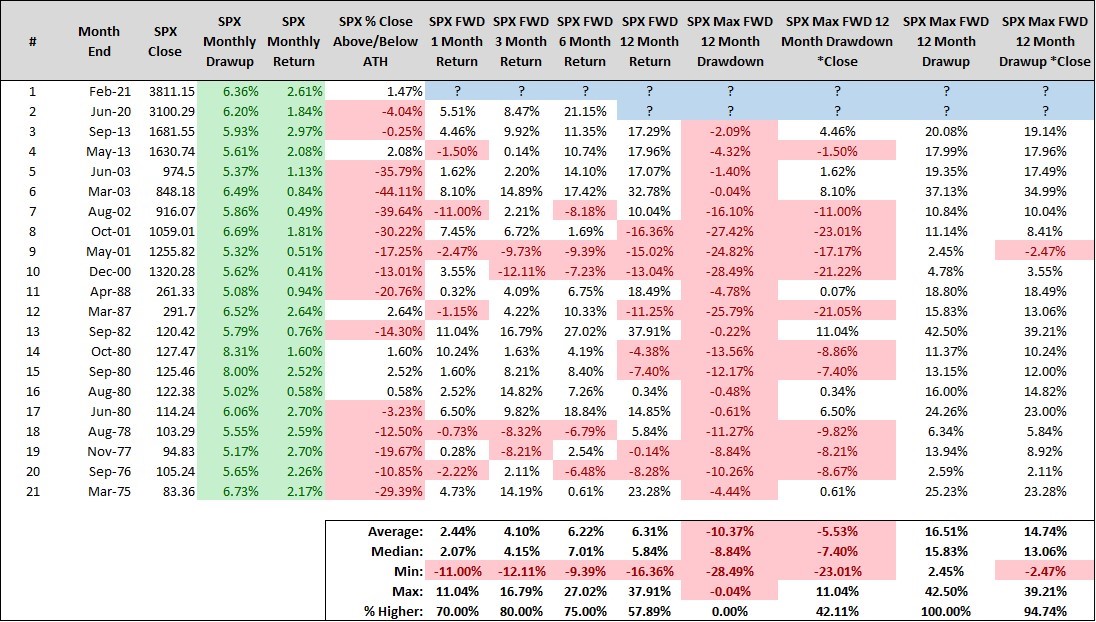 We also have the historical tailwind of the month of February closing at a new all-time high monthly close.

February of 2021 becomes the 17th February to close at a new all-time high since 1970. The prior sixteen saw the S&P 500 continue to climb, with the index closing higher three months later fifteen of sixteen times and both the remainder of the calendar year and one year later fourteen of sixteen times. Average returns are stellar across the board.

So, while both January and February were disappointing, the preponderance of evidence suggests the primary trend for the S&P 500 remains up, or "bullish". During uptrends, long-term investors are best served investing in the most traditional sense of the word; uptrends are a time to buy 'em and hold 'em. It's not until the primary trend can be labeled as down, or "bearish", that long-term investors should strive to win by not losing. We're clearly not there yet, so for now we all have to dance while the music is playing. 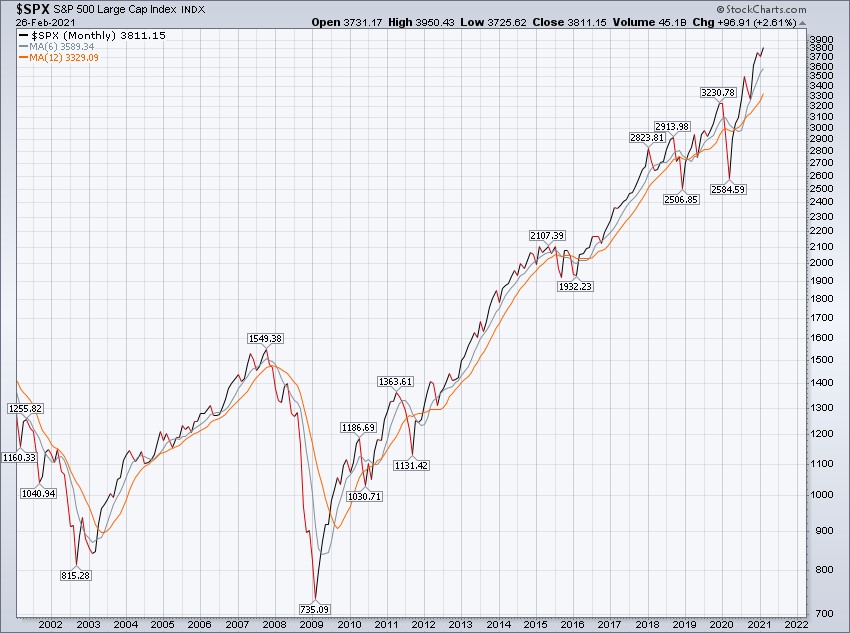 Friday's close is a new all-time high monthly close for SPF. SPF gained a massive 11.36% in February, strongly outpacing the S&P 500 by 8.53%. SPF hasn't outpaced the S&P 500 by more than 8% in a single calendar month since November of 2016 and before that August of 2009. Safe to say the outperformance in February was rare.

The monthly chart of SPF is easily our favorite chart pattern. It's analogous to the feeling you get when you find the left lane free and clear after you've been stuck sitting in traffic for longer than you ever imagined. You just want to slam on the gas and go. SPF now has no known resistance left on the charts, and there's a chance it slams on the gas and goes. It's going to be popular to believe the fate of SPF lies entirely in the yield curve's hands, but we'd caution against having conviction in the idea that one variable controls the fate of the entire financial sector. 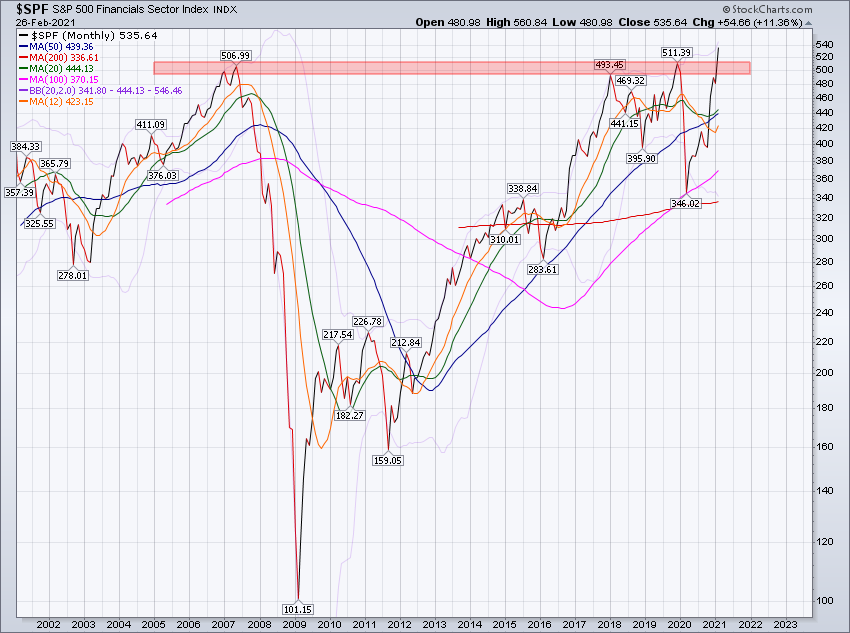 SML has increased five months in a row, and ten of the last eleven months, while closing February at a new all-time high monthly close. SML's trailing five-month return records at an astounding 49.49%, the strongest five- month period of returns in the index's history.

The only narrative here to describe SML's absurd performance in the present is the idea of an economic bonanza into the future.

COVID cases are indeed plunging, there is pent-up demand, and there is a metric ton of more free money coming to consumers. Collectively, as a country, real personal income is at an all-time high (click here). These are the ingredients SML has been pricing in the last five months. Whether or not participants are correct will determine just how nasty the inevitable correction is for SML. 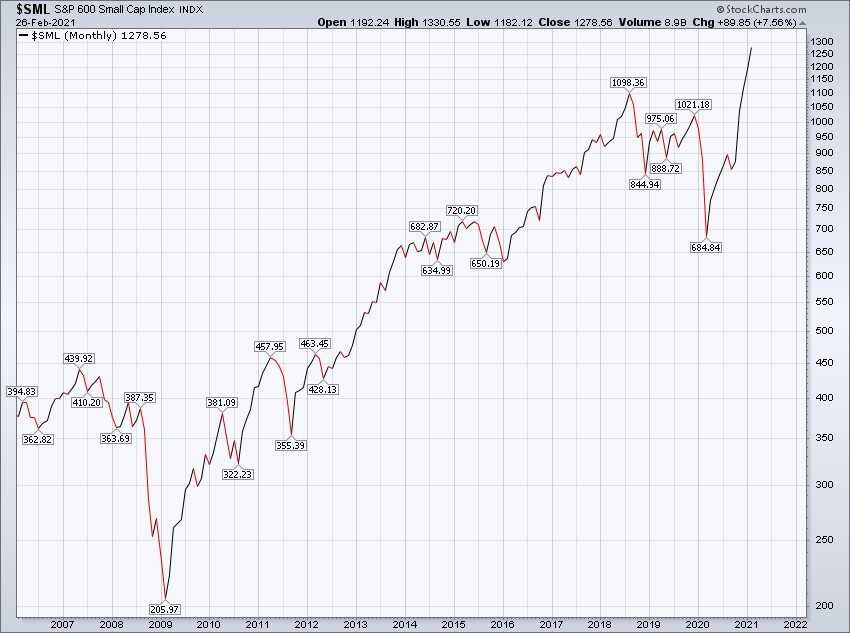 SPEN has been a laggard for years but it is absolutely pricing in the economic bonanza story too. If SPEN could talk it would be telling us all about how much energy we're going to be using when the reopening story hits its stride. SPEN is still massively on sale and if you believe in the "catch up" trade then SPEN is probably right up your alley. 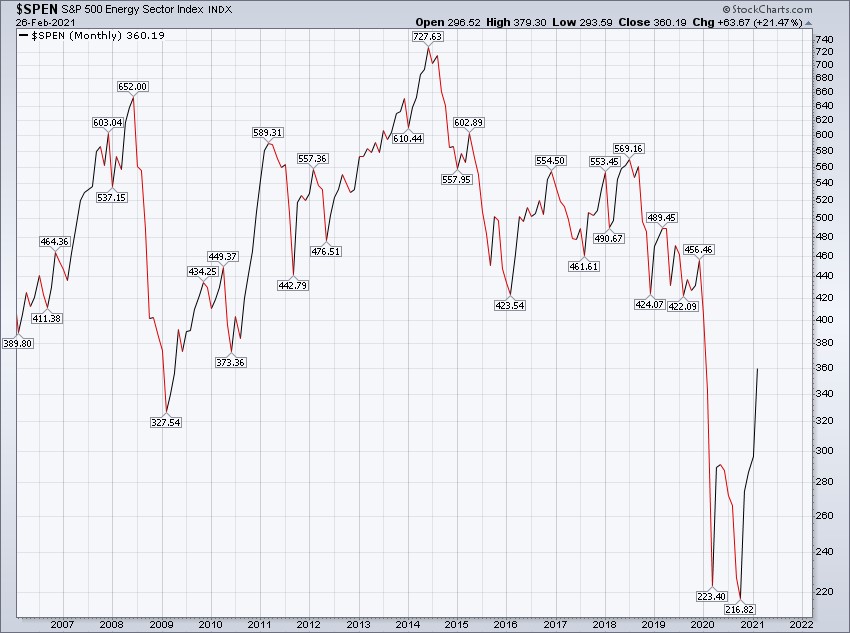 Last but not least, Bitcoin (BTC) is finally taking a breather.

It's hard to spot it on the weekly chart below but BTC is presently down -21.84% for the week. The fact that it looks like barely a scratch on the chart below is so Bitcoin.

We remain completely mystified, yet excited, by BTC...with the excitement being a derivative of just how bullish its chart appears. We have no problem believing in the idea that "digital gold" is here to stay and most likely headed to the north over time, with extreme volatility of course. 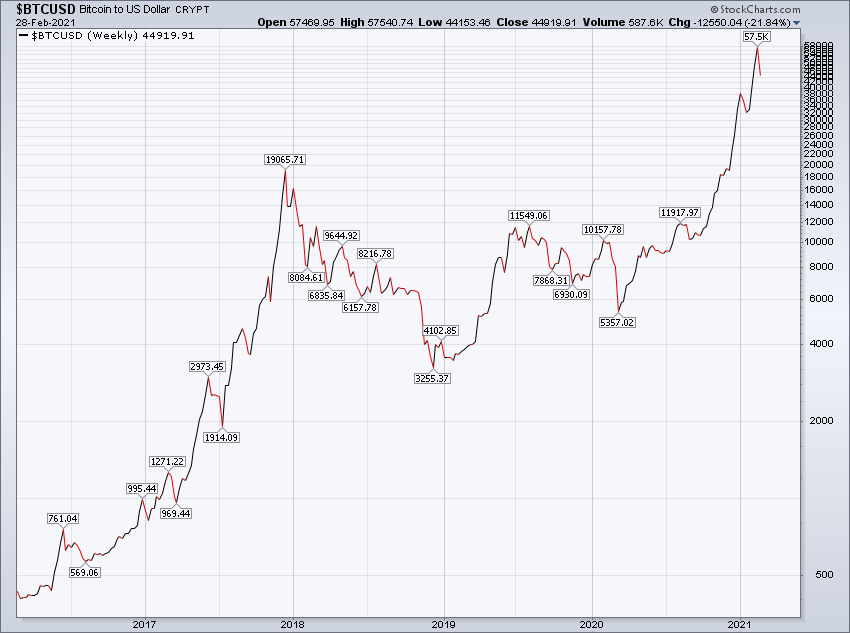