The index has now declined six of the last nine weeks and is down -9.18% thus far in 2022. We often marvel at how things seem to change from year to year, and it's like the volatility switch got turned on the minute we flipped the calendar to 2022.

After last week's upside reversal we wrote that it was imperative we see follow-through to the upside this week, but we really didn't see any. The index traded down to 4,315.12 on Monday, a decline of -1.59% from last week's close, so we didn't exactly pick things up this week where last week left off. The S&P 500 did find some buying interest throughout the week, trading up to our weekly high at 4,416.78 on Thursday. Economic data was mostly strong this week and participants seemed to like what they heard from Fed Chair Powell (click here), but the index ended the week in the same fashion in which it began...by selling off.

The S&P 500 traded down to 4,284.98, a decline of -1.80% on the session, before rallying into Friday's close. This came on the heels of Friday's jobs beat (click here), and given the consensus expectation that "growth is slowing" it's easy to wonder if the economy of tomorrow can't be stronger than the economy of today. Throw in the Russian conflict, and the headline risk that's associated (click here), and the price action of the S&P 500 is best described as fragile.

The market just feels sick at the moment, as if it has a stomach bug.

Clearly there's an element of "buy the dip" that's still alive and well, and in spite of the news flow thus far in 2022 the S&P 500 is comfortably above both the January and February monthly lows. There's a splash of resilience in the price action. We're just not sure if this is a good thing. Sometimes the only way to get past a stomach bug is to let it all out, and in terms of price action this is analogous to a "flush".

Turning to the chart, it's still a total mess. The index remains totally trendless, confined between clear levels of support and resistance.

We're sitting at the lower end of the range (note the yellow shaded region), so the price action over the week ahead can be pivotal. 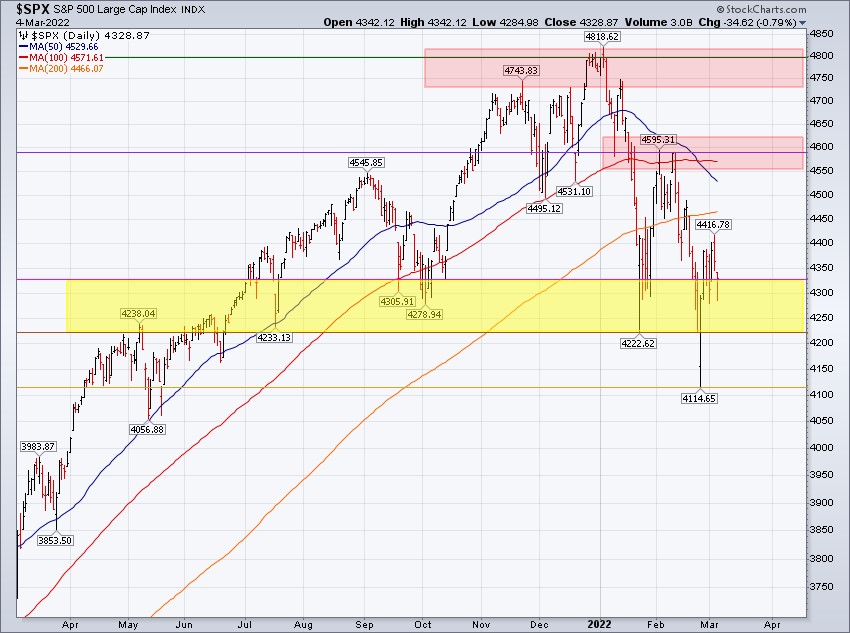 As for sectors, the story this week was the same as the story of 2022 as a whole, with energy stocks roaring to the upside.

The S&P 500 Energy Sector (SPEN) gained 9.25% this week and is now higher by a massive 34.79% thus far in 2022. There isn't another sector within the S&P 500 in the green on a year-to-date basis, so SPEN's outperformance is otherworldly at this point. The downside here is prices at the pump have soared (click here), which is clearly a tax on consumers' ability to consume.

There were five sectors that outperformed this week and most of them are considered the "defensive" areas of the market. Utilities ripped 4.90% this week, and real estate and healthcare both gained more than 1% on the week, too. Consumer staples were flat, which is relative weakness compared to other defensives but relative strength when compared to the S&P 500.

Underperformers were most of the larger sectors within the index, or the areas we don't want to see underperform. Financials fell -4.78% this week as interest rates plunged given the emergence of the "flight to safety" trade. Technology stocks fell -2.98% and consumer discretionary declined -2.61%. Amazon fell -5.30% this week and has now given back most of its upside earnings beat. Collectively, these sectors comprise ~50% of the S&P 500, so if they're not playing well the team has little chance to win.

The relative rotation graph of the sectors within the S&P 500 with 10-week tails illustrate the above points well - energy and the defensives leading the way, technology and the larger sectors lagging behind. 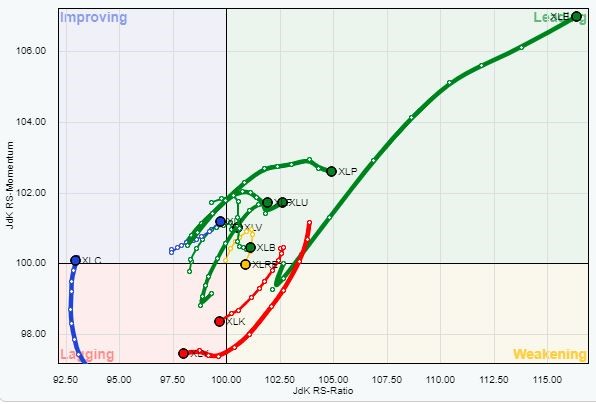 Regarding the week ahead, it's a relatively quiet week on the economic data front until Thursday - that's when we'll get the Consumer Price Index an hour before the bell. Inflation is yet to prove all that "transitory", and the word "stagflation" is growing in popularity.

It will be another relatively loud week on the geopolitical front as the situation in Ukraine doesn't appear to be trending in a peaceful direction. The sheer fact that there is a greater than 0% probability of nuclear war is rather terrifying in and of itself.

All of this weighs on the S&P 500 via massive uncertainty as to what the world looks like a few short months from now.

Volatility remains elevated and we truly have a boom or bust scenario on our hands as far as what is next for the S&P 500. All we can do is hope for the best while being prepared in the event the worst is indeed around the corner.

A monthly close here in March below ~4,307 and the monthly chart will sport a lower low in terms of closing prices. That will lead us to label the primary trend as down, or "bearish", so to say the price action over the remainder of March is pivotal is an understatement.

The market has pulled up to a series of flashing red lights. It's best that long-term investors step on the brakes, stop what they're doing, and assess the risks to their financial well-being looking forward. 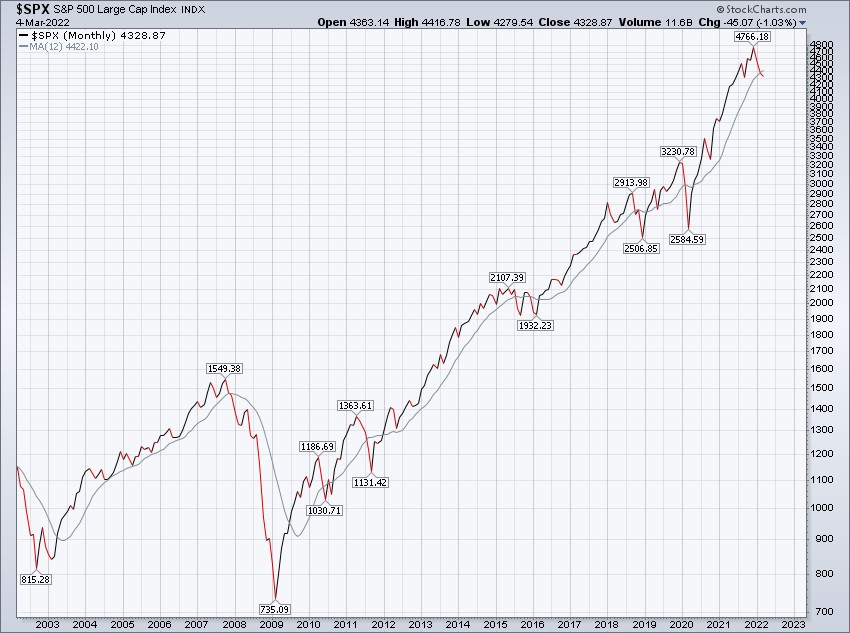 Put differently, the S&P 500's slow start to 2022 calls out calendar years that don't exactly leave us feeling like volatility is suddenly going to disappear.

Furthermore, each of the last six calendar years that started this way saw the S&P 500 trade down by -10% or more from February's close. The average maximum forward twelve-month drawdown relative to February's close records at -13.10%, which would suggest a trade down to ~3,800 at some point over the forward twelve months, and most probably here in 2022. This would also mark a roughly 40% Fibonacci retracement of our entire post-COVID advance in terms of monthly closing prices. If forced to, we'd bet on the S&P 500 trading down to ~3,800 at some point in 2022. Whether that's sooner or later is where we're totally in the dark.

Another way to quantify what we've seen thus far in 2022 is to reference all sharp, fast pullbacks from all-time highs.

Since 1950, there are 18 prior calendar months that match. Like the prior study, it's definitely been a mixed bag forward-looking. The S&P 500 has recorded a -10% drawdown or worse from signal date monthly close ten of the last twelve instances. The average maximum forward twelve-month drawdown relative to February's close records at -13.26%, almost identical to the prior study, which further supports the idea of a trade down to ~3,800 at some point over the forward twelve months (and most probably here in 2022).

We'd be remiss in not pointing out that the above studies also suggest that the S&P 500 trades up by more than 10% from month-end signal date close at some point over the forward twelve months too. This would suggest a trade back up toward ~4,800 at some point over the remainder of 2022. It's hard to imagine at the moment, but perhaps a "retest" of the upper end of our trading range is in the cards. There will be a really, really nice rally here in 2022, that much we believe. The bulls always find a way to land a nice counterpunch.

As always, the past is not consistently predictive of the future! If knowing what lies ahead was truly a derivative of knowing what's happened in the past we'd all have a lot more money via much higher annualized rates of returns across our portfolio.

The above studies simply reinforce the idea that anything is possible and to avoid complacency. An exciting and most likely volatile remainder of 2022 awaits. Proceed with caution and respect for the unknown.

The commodities asset class is absolutely ripping to the upside here in 2022. The table below lists the year-to-date returns of a variety of futures contracts. Virtually all of the gigantic green bars are commodities, while virtually all of the large red bars at the bottom of the table are major market equity indices. 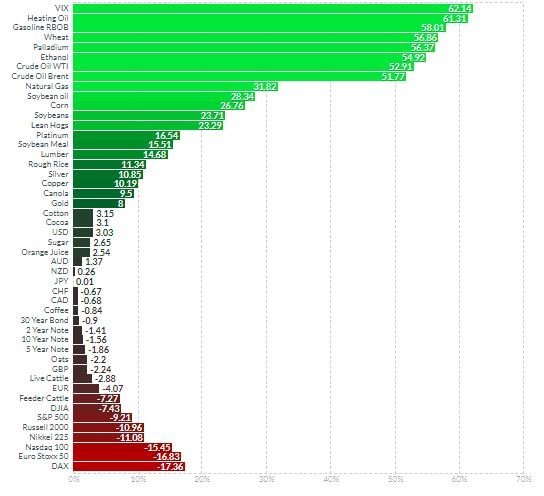 The Invesco DB Commodity Tracking Index Fund (ticker symbol DBC) has increased an astounding 11 weeks in a row and even gained 15.08% this week alone after finishing last week on a 10-week winning streak!

DBC is scorching hot and has gained 34.85% over the last 11 weeks, but remember...prices don't move linearly forever. There will be a nasty selloff for DBC here in 2022, that much we believe too.

This material is being provided for client and prospective client informational purposes only. This commentary represents the current market views of the author, and Nerad + Deppe Wealth Management (NDWM, LLC) in general, and there is no guarantee that any forecasts made will come to pass. Due to various risks and uncertainties, actual events, results or performance may differ materially from those reflected or contemplated in any forward-looking statements. Neither the information nor the opinions expressed herein constitutes an offer or solicitation to buy or sell any specific security, or to make any investment decisions. The opinions are based on market conditions as of the date of publication and are subject to change. All data is sourced to stooq.com and stockcharts.com. No obligation is undertaken to update any information, data or material contained herein. Past performance is not indicative of future results. Any specific security or strategy is subject to a unique due diligence process, and not all diligence is executed in the same manner. All investments are subject to a degree of risk, and alternative investments and strategies are subject to a set of unique risks. No level of due diligence mitigates all risk, and does not eliminate market risk, failure, default, or fraud. It should not be assumed that any of the securities transactions or holdings discussed were or will prove to be profitable, or that the investment recommendations or decisions we make in the future will be profitable, or will equal the investment performance of the securities discussed herein. The commentary may utilize index returns, and you cannot invest directly into an index without incurring fees and expenses of investment in a security or other instrument. In addition, performance does not account other factors that would impact actual trading, including but not limited to account fees, custody, and advisory or management fees, as applicable. All of these fees and expenses would reduce the rate of return on investment. The content may include links to third party sites that are not affiliated with NDWM, LLC. While we believe the materials to be reliable, we have not independently verified the accuracy of the contents of the website, and therefore can't attest to the accuracy of any data, statements, or opinions