There are two opposing perspectives to describe the price action this week.  The bears will point to a second consecutive -2% weekly decline with the market defining clear resistance at the ~3,425 price region.  The optimists will point to the lack of sustained selling pressure following Monday's near -3% decline, and really from the prior Friday's low at 3,349.63.

The great Perry Kaufman would call out the market's inefficiency (click here).  In other words, the S&P 500 has been sprinting in place the last five trading days, with the ~3,350 price region being somewhat like a magnet (blue line on the chart below). 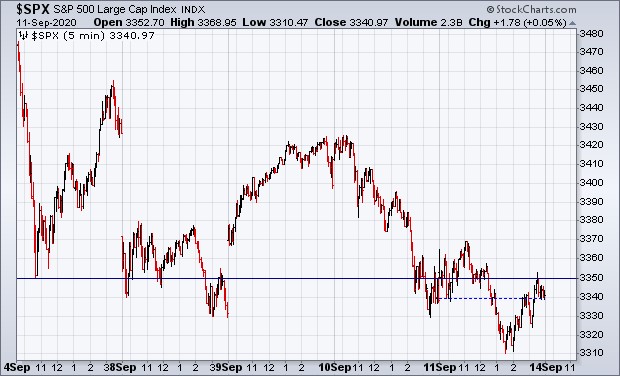 From a trend perspective, the S&P 500 did record a trading week with a lower high, lower low, and lower close than the week prior.  This marks the first such trading week with these three attributes since March! (it's obvious we haven't been in a "downtrend").  This week's low came in at 3,310.47, which marked our dance with the 50-day simple moving average since April.  It appears the 50-day simple moving average "held" as of Friday's close, but it appeared the 20-day moving average "held" as of last Friday's close too, and that certainly wasn't the case. 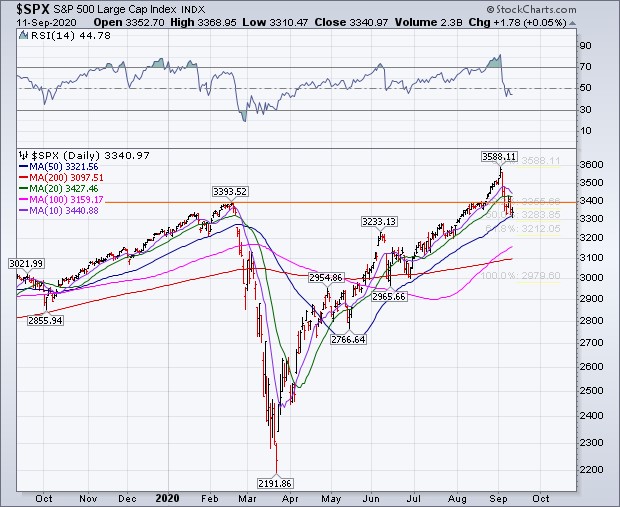 We're mostly in the dark about where things are headed over the coming week.  The bears clearly have the ball, but they haven't exactly gained many yards the last five trading days...and that's even with the technology sector continuing its bloodbath.  The S&P 500 Technology (SPT) sector declined -4.36% this week, after falling -4.15% the week prior. 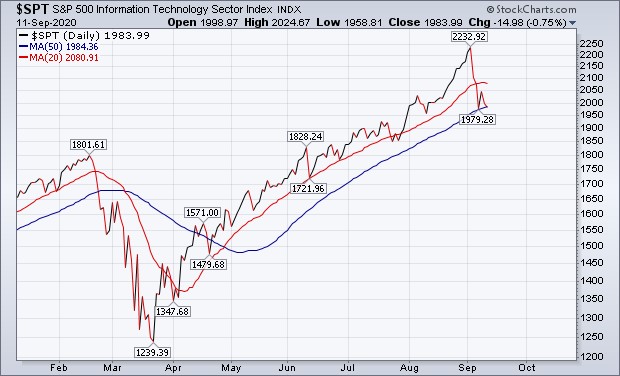 Volatility remains elevated with the Volatility Index (VIX) closing the week at 26.87.  However, the VIX declined -3.88 percentage points this week, or -12.62%.  Pairing together a calendar week where the S&P 500 declined more than -2%, and the VIX declined by more than -10%, isn't exactly the norm.  We can count on two hands the number of times this has occurred the last 20 years. 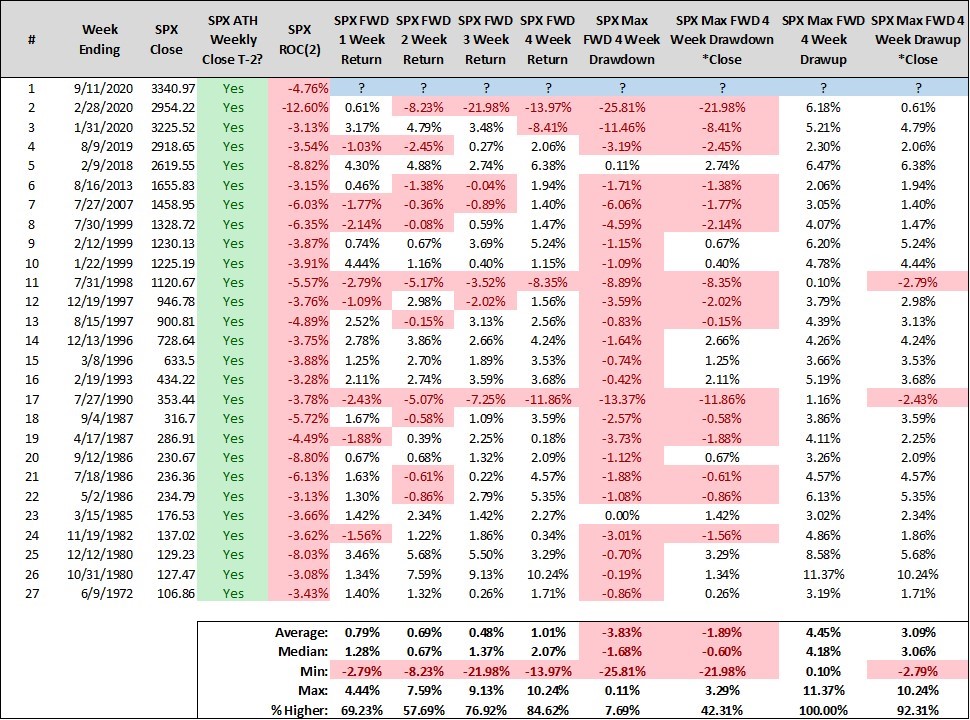 We wrote last week that "if selling persists on Tuesday it will continue to give us deja vu to February of 2020".  Referencing the table above, it's no surprise that the most recent "match" to this quantitative setup is from February of 2020.  We should all remember what happened a few short weeks later.

As always, the past can't be used to consistently predict the future, otherwise investing for success would be an easy endeavor.

If anything, the study above simply supports the idea that anything is possible over the forward one month.  Over the week ahead, we'd like to see the S&P 500 continue to bend, but not break.  It's OK for the index to trade down into the ~3,200s, but we'd then like to see eager buying interest bringing the S&P 500 back toward the "magnet" at the 3,350 marker.

We're most certainly not out of the woods yet, the seat belt light remains on, but hopefully the week ahead can do what each of the past two weeks have failed to do...finish on a positive note! 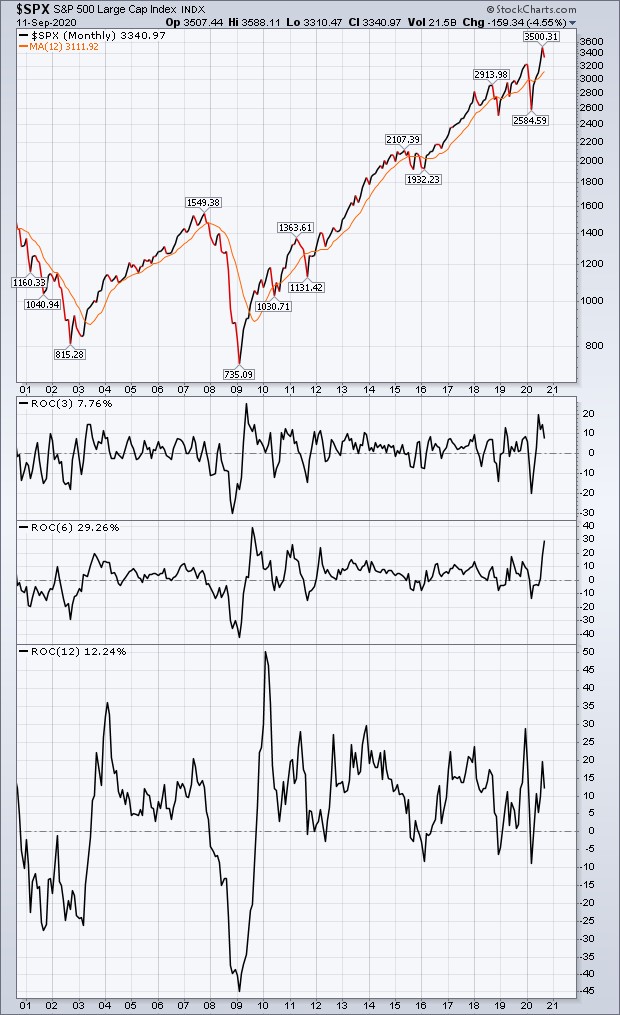 During primary uptrends, long-term investors are generally best served with an equity overweight across their aggregate portfolios' asset allocation and relying mostly on passive investing strategies.

Broadly speaking, this is the name of the game to generate meaningful capital appreciation during a sustained advance for the broad equity market, like we've seen for most of the last twelve years.

However, the S&P 500's price action the last five years has also shown a newfound propensity for simply falling out of bed.

The S&P 500 has effectively crashed twice over the last one and a half years (December of 2018's mess and March of 2020's catastrophe).  Throw in August of 2015's meltdown and January of 2016 marking the worst start to a calendar year in the history of the S&P 500, and it's quite clear that not only do long-term investors now have to have a plan to manage a long, slow, steady decline such as the "bear markets" from 2007-2009 and 2000-2003, but also a plan to manage the falling out of bed periods.  This is no easy task and there are no great answers, unfortunately.

The best answer, at least in our opinion, is to have a prudent, intelligent, and systematic plan governing the ongoing management of your portfolio.

Every investment strategy is different, and the market climates where they win (make money) and lose (lose money) differ from one another.  Think of the classic "buy and hold" as one that only truly loses during market climates defined as long, slow, and steady declines associated with "bear markets".  This approach does't lose often, but when it does it gets absolutely destroyed, which can leave a long-term investor's financial future in jeopardy.

Think of the traditional "60/40" strategy (i.e., allocating 60% of your portfolio toward stocks and 40% toward bonds) as one that only loses during climates defined as long and steady advances associated with "bull markets" for the S&P 500 (i.e., it underperforms the classic "buy and hold").  This can leave long-term investors to "chase" performance and invest too aggressively at exactly the wrong times - after the market's biggest of advances.

Think of more modern tactical asset allocation strategies as one that only truly loses during market climates that are dominated by falling out of bed moments.  They're great at riding long, sustained trends, no matter whether they're uptrends or downtrends, but they're generally expected to be too slow to cut losses when the S&P 500 falls out of bed, and thus pay high opportunity cost premiums.

This point is that a long-term investor needs to have an approach that governs when they'll rely on each of the strategies mentioned above.

When you have access to each of these three tools or strategies in your backpack, you have the most important tools necessary to get the job done.  You have the tools necessary to navigate the most important of market climates.  When you invest as if you only need one of these strategies (i.e., your long-term investment management plan simply chooses to rely on one of the above approaches for all market climates), you're effectively only packing one tool to get the job done.  If that tool isn't a match for the task at hand, your portfolio isn't going to get the job done.  Placing all of your eggs in one strategy's basket is never the most optimal approach.

Putting it together, diversification in 2020 is arguably more important at the strategy level than the asset class level.

Given the valuations across stocks and bonds, it's not as if asset classes are poised for strong returns on a forward-looking basis.  This shifts the emphasis to how you invest in these asset classes in order to generate the returns you need to meet your financial goals.  The days of being handsomely rewarded for only investing passively in a combination of stocks and bonds are probably behind us, unfortunately.

A trading range has emerged and it's setting the stage for a big move for gold, one way or the other. 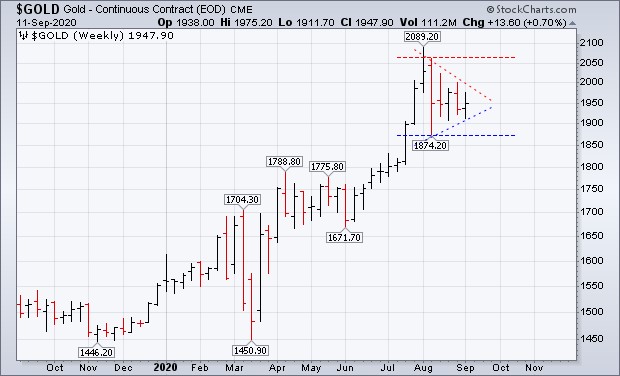 Broadly speaking, price consolidation following a huge move higher or lower is viewed as a continuation pattern.  More often than not, the price of the asset resumes, or "continues" moving in the same direction it was previously traveling after the period of consolidation is behind us.  The chart pattern above reflects that of a pennant (click here)...

From a technical perspective, gold's primary trend is up or "bullish" on an absolute and relative basis.

Gold's returns have easily outpaced both the S&P 500 and long-term Treasury bonds over the last twelve months.  Last July we wrote that we thought gold was the "easiest" buy across the investable universe, so we're certainly pleased with what the metal has accomplished.

Moving forward, we continue to believe gold is the "easiest" buy out there for most long-term investors.

The Fed wants higher inflation while keeping interest rates at depressed levels across the curve.  The Fed has even floated the idea of yield curve controls in the event higher inflation is leading to a steeper yield curve (i.e., the Fed is not only looking to goose inflation but has also made it clear that they will suppress long-term Treasury yields to keep economic conditions accommodative).  If the name of the game is to not fight the Fed, then it's to invest alongside the Fed, and right now the Fed is indirectly telling us it wants higher gold prices.

Looking forward, we continue to believe the future climate is best described as "radically uncertain".  Building portfolios today to thrive in a radically uncertain tomorrow requires a systematic, rules-based approach that allocates toward the areas showing the most relative strength.  At the moment, that area is gold.  And hey, even Warren Buffett has taken notice (click here).