If it was 3rd-and-goal from the 1-yard line last week, then it appears the bulls got the nose of the ball across the goal line this week. The overall pattern appears as consolidation following a nice sprint to the north, a sort of "flag" chart pattern. This would set the stage for a move toward the ~3,700 price region over the week ahead, and that would have us yelling "touchdown!" (and Steve's a Jets fan so he hasn't been yelling that often this year). 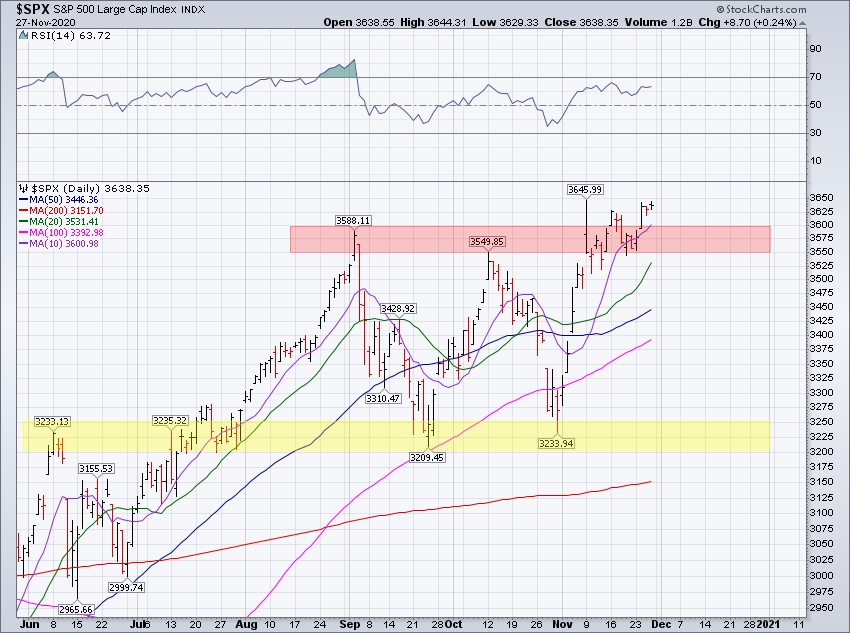 For each of the past few weeks we've been writing about "internal rotation" and how it was coming at a cost. Smaller market capitalization sectors like energy, materials, and industrials were thriving while the largest sector, technology, underperformed. In last week's Update we wrote that we wanted to see "all of the aforementioned sectors moving to the upside", and we got what we wanted this week.

Seven of the eleven sectors within the S&P 500 gained 2% or more this week.

Energy led the charge for the second consecutive week (gaining 8.66%), while technology pulled up the rear (gaining 2.12%). The Nasdaq Composite (COMPQ) closed the week at a new all-time high daily and weekly close too, its first since September. 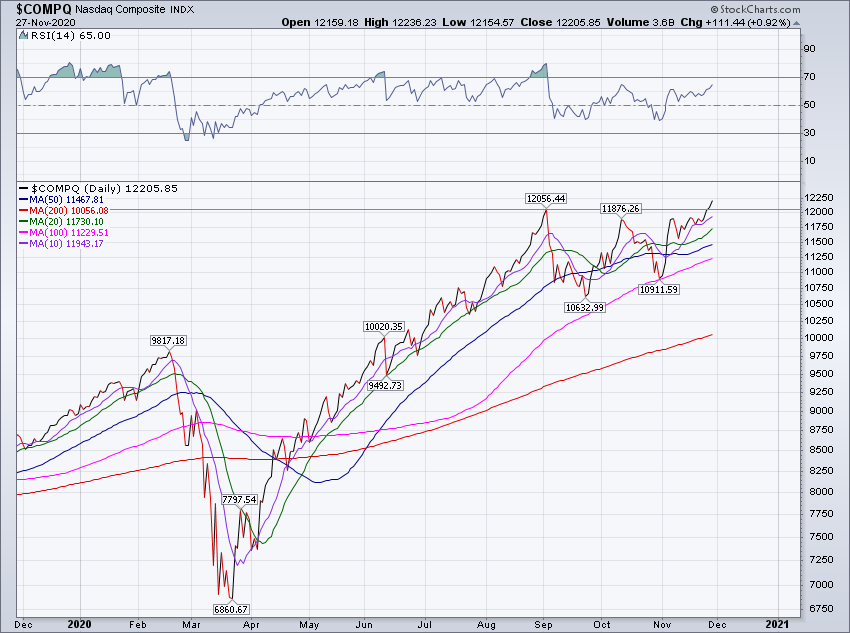 It was classic "risk-on" price action with the defensive sectors, consumer staples, healthcare, utilities, and real estate all underperforming. The S&P 500 has been a one- or two-trick pony for a long time. The price action this week provides a glimpse into the idea of the index becoming a four- or five-trick pony, something that's generally the norm in the early stages of economic expansions.

The Relative Rotation Graph (RRG) below illustrates this point nicely. Technology (XLK) and consumer discretionary (XLY) have been the top two ponies, and both are now sitting in the "weakening" quadrant with tails suggesting they're heading toward "lagging". Meanwhile, energy (XLE) has made a gigantic move toward "improving" while everything else appears to be headed toward "leading". 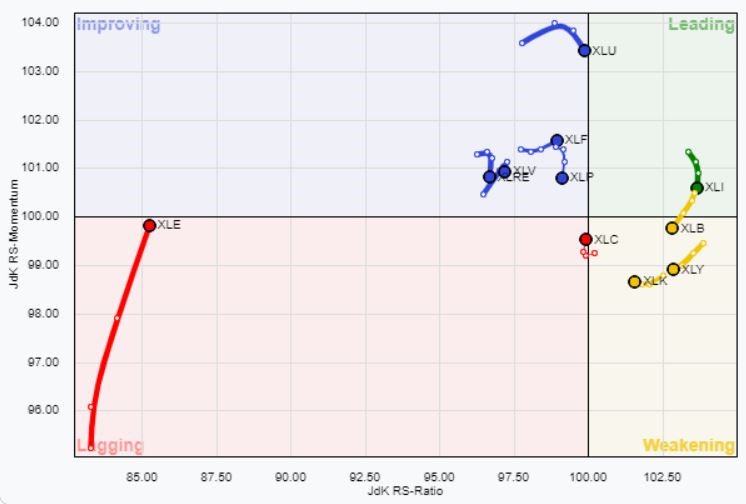 With one trading day remaining in November, the S&P 500 is presently higher by 11.27% for the month.

Barring a sizable down day on Monday, the index will gain 10% or more for just the 12th time since 1970. We often write that the S&P 500 will trade beyond the limits of imagination, and we don't know anyone who imagined a double-digit monthly advance here in November of 2020.

November's surge higher leaves the S&P 500's primary trend defined as up or "bullish". During primary uptrends, long-term investors are generally best served pairing an equity overweight across their portfolios' asset allocation with mostly passive investing methodologies. We like to reiterate this message week after week to help our readers have proper perspective regarding the ongoing management of their asset allocation. It's our best effort to reiterate the message of "being right and sitting tight".

There are no known levels of "resistance left on the chart. October's selloff now appears as a picture-perfect backtest of old resistance, which obviously became support. 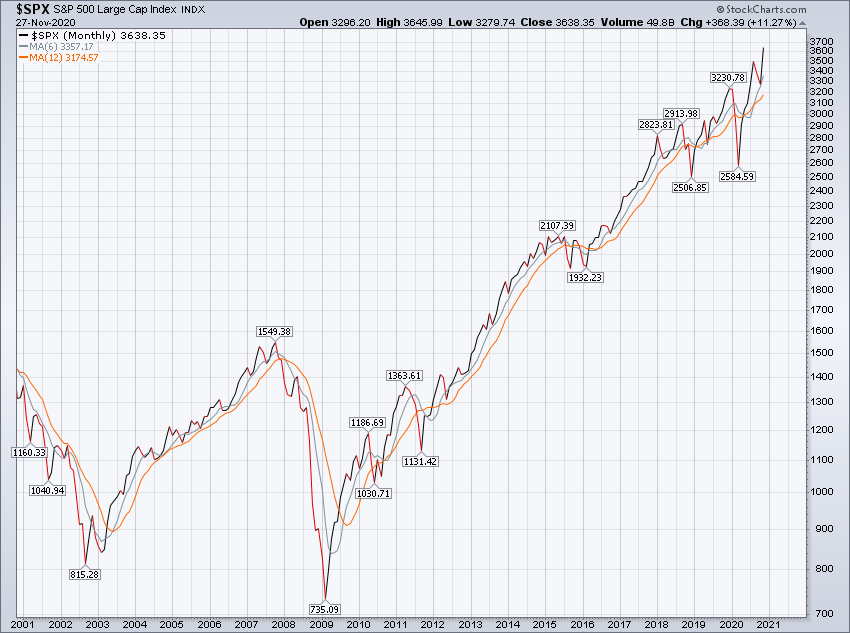 As we mentioned earlier, there are twelve prior instances of calendar months that gain 10% or more since 1970. With the most recent 10% or more monthly advance coming from April of 2020, there are eleven prior instances that have a full forward six months worth of performance data and only ten that have a full forward twelve months worth of performance data.

Interestingly, after the S&P 500 gains 10% or more in a single calendar month, the index has then closed higher six months later nine of eleven times for average returns of a whopping 11.25%. Eight out of ten closed higher twelve months later for average returns of 12.65%, and only three instances saw the S&P 500 record a -10% correction from the signal date month end closing price.

Now, we'd be remiss in not pointing out November of 1980 on the above table since it's the only other November to gain 10% or more. It was also an election year, and also a calendar year that saw a first quarter catastrophe followed by a tremendous rally to the north. For those who believe in price analogs, 1980 offers a compelling baseline.

However, we don't believe that what happened in 1980-1982 has any bearing on what will happen in 2020-2022. We don't even believe the table above can tell us anything about where the S&P 500 is headed into the future. If calculating a monthly return for the index and sorting could define an edge, we'd all be filthy rich from investing at this point.

Instead, what we do believe is that the above table helps reiterate our belief that anything is possible moving forward for the S&P 500.

Those who truly embrace this can then check their ego at the door. Nobody knows where the S&P 500 is headed over the coming 3-6-12 months...nobody.

Therefore, if you're convinced the S&P 500's returns in the present are too good to be true and "this can't continue", please reference the above table before you press the sell button. You don't know that the S&P 500 is going to behave negatively into the immediate future.

If you're convinced the S&P 500 can only move higher from here, reference the above table (specifically what transpired after November of 1980) and think twice before you lever up your portfolio. You don't know that the S&P 500 is going to behave positively into the immediate future.

Precedent isn't predictive, but it almost always supports the idea that the S&P 500 can and will price beyond the limits of imagination. Embracing this belief with as much dispassion as possible will then allow us to stick to the rules of our long-term investing plan, ignore the short-term noise and volatility, and keep the faith that we will be fairly compensated over time. Those are the keys to the castle.

IWM is higher four weeks in a row, has gained 20.43% the last four weeks (i.e., the month of November), and has clearly broken out above horizontal resistance at the ~$168.50 price region. This marks the second time IWM has gained 20% or more over a four- week stretch in 2020, the other being from April. 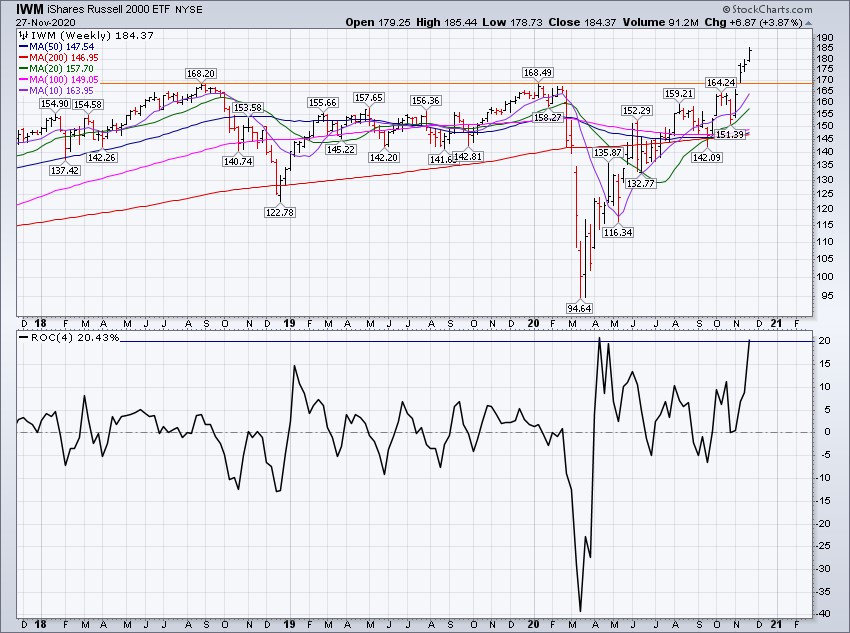 The metal is now face-to-face with its 50-week simple moving average (50MA), a pivotal region of "support".

We've been very optimistic (bullish) on gold for the last year and a half, and it's imperative the metal sustain above 50MA in order to keep the bullish thesis intact. 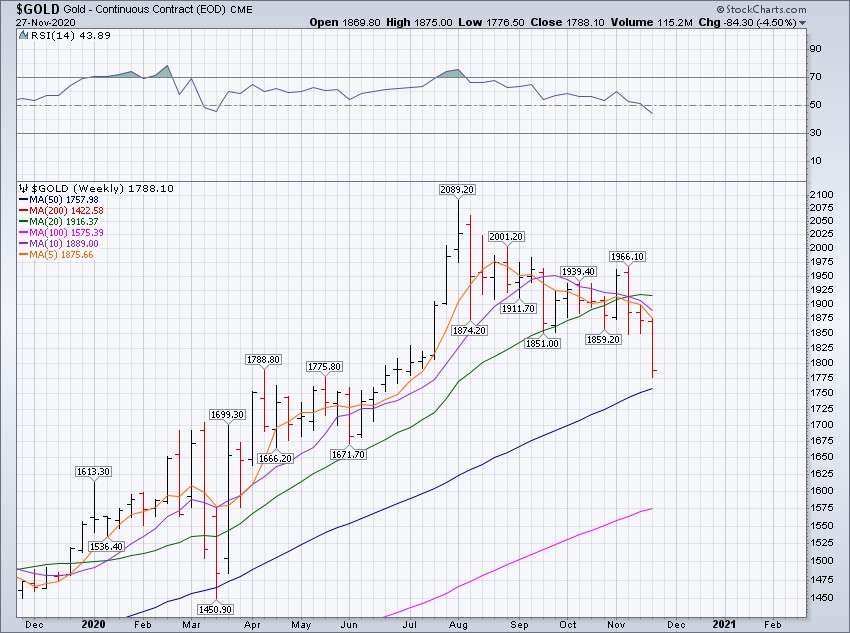 We hope you had a wonderful Thanksgiving!