The index opened near the low of the week (3,284.53), closed near the high of the week (3,352.54), and actually increased every single day this week thanks mostly to a strong final hour of trading on Friday.  Friday's close is the second highest weekly close in the history of the index, which has now increased five of the last six weeks.  If it was 3rd-and-goal from the 1-inch yard line last week, the bulls put the ball in the endzone this week.  Broadly speaking, the S&P 500 appears to be breaking out from a near two-month period of consolidation. 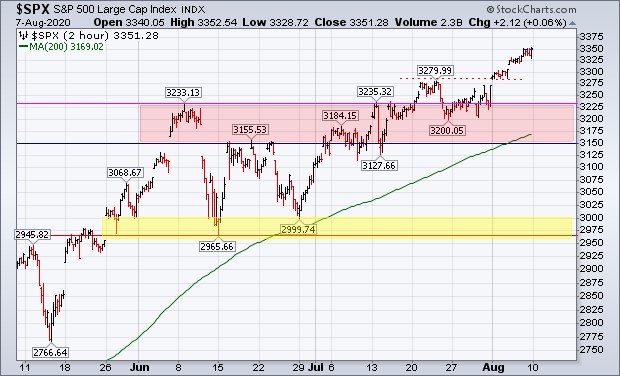 There's only one known level of resistance left on the charts, the rest are just speculative, but the last hurdle is always supposed to be the most difficult one. 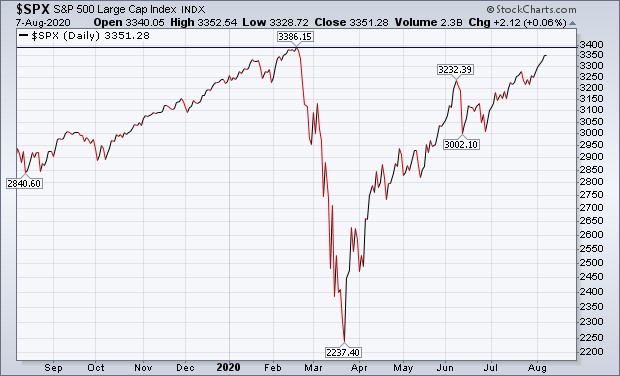 Given the S&P 500's propensity to travel to price levels where the largest number of transactions will occur, we'll be fairly surprised if the S&P 500 doesn't trade up to all-time highs over the week ahead.

However, the bears can go 3 and out, meaning the S&P 500 doesn't experience any real meaningful pullback off its first retest of 3,393.52, and instead takes a brief pause at resistance and then blows right through it.  Or, the bears can get a few first downs, analogous to a -2% or -3% pullback for the S&P 500.  Sometimes, the bears even establish long drives, and score some points, analogous to a -5%-10% pullback or correction for the S&P 500 after briefly trading above 3,393.52.  Double top chart formations are well known and respected for a reason, and in this case it can't be ruled out at this point (we can never be sure we made it over the last hurdle until we land safely over the last hurdle!).

We do have some short-term headwinds in front of us as we head into the week ahead, which furthers our view that the index will have trouble sustaining at the ~3,400 marker.

For starters, the S&P 500 has closed higher six trading days in a row, and prices don't move linearly forever.  Second, there are measures of sentiment that are at extremes.  For example, the CBOE Put/Call Ratio (CPC) closed this week at just 0.73 with a weekly high at just 0.74.

Since 2009 (an era where stock prices have mostly only gone up), we've only seen 9 other calendar weeks where the weekly high for CPC was below 0.80.  This annotates calendar weeks where participants, collectively, had far more desire to transact in call options than put options.  Interestingly, the S&P 500's forward 3-week returns have closed lower seven of nine instances.  Four of the nine samples even marked the highest weekly close for the S&P 500 over the forward one month.  While this is a crime of small numbers, and lacks any semblance of significance, it does set a behavioral precedent whereby when participants shun put options, and behave as if "stocks only go up", the price of the S&P 500 usually heads to the south shortly thereafter.

As we look to the week ahead, Trump made headlines on Saturday by signing a few executive orders (click here).  Whether this has traction or is just a political ploy is anyone's guess, but perhaps this will help catapult the S&P 500 to a rather euphoric open, an open that leaves us face-to-face with all-time highs on Monday.  The trillion- dollar question is: Will the index stay then stay there for the remainder of August? We believe the answer is most likely no.

Our work labels the primary trend for the S&P 500 as up or "bullish".  During uptrends, long-term investors are best served with an equity overweight across their asset allocation and relying mostly on passive investing methodologies.

Broadly speaking, the idea is to "hold 'em" during uptrends and "fold 'em" when evidence suggests the price of the S&P 500 is in a downtrend.  This will pair together strong returns during uptrends with the trade-off being paying the price of false positives, or folding 'em when there was actually a decent hand in the near future.  However, it's not a wise decision to stop wearing a seat belt because the seat belt locks down far more often than it actually needs to lock down.

For now, the offense is on the field, and it appears to be a time to "hold 'em", even if things get bumpy in August and no matter how counterintuitive that may seem given the state of the economy.  In fact, the counterintuitiveness is probably helpful to the idea of a continued uptrend into the future.  Downtrends tend to evolve when we're all convinced they won't evolve.  Uptrends tend to extend when we're convinced they can't extend.  It's why they say bull markets love to climb the "wall of worry", and the "wall" is gigantic at the moment. 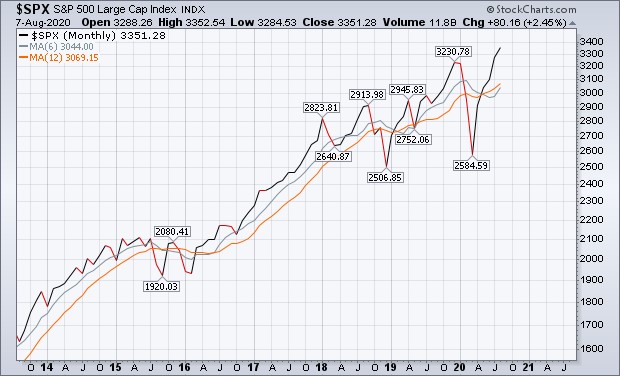 As always, we can't use the past to consistently predict the future, the game's just not that easy.  In the event the S&P 500 closes the month of July 2021 higher than the month of July in 2020 it will be a pure coincidence, a matter of correlation, not causation, dating back to its four-month winning streak from April of 2020 through July of 2020.  However, the point of any analysis is only to help an investor make an informed decision, it's not to predict the underlying price of an asset.  The adults in the room know predicting the price of an underlying asset is an exercise in futility.

It's imperative long-term investors do not let the fear of striking out keep them from playing their game.  Given the chaos across the world at the moment, it's easy for someone to want to deviate from their long-term investing plan.  It's easy to understand why many want to sell it all and move to cash.  It's easy to feel like "we're doomed".

However, the table above illustrates why that could be a costly mistake, because there's a ton of precedent that suggests the price of the S&P 500 will trend higher over the forward one year.  If long-term investors adhere to their investment plan, they'll likely be rewarded.  There will be challenging times, there always are, but where there is no risk there is no reward.

Gold Goes 9 For 9, But Turbulence Is Expected

Gold gained 2.12% this week with Friday's close at $2,028.  Gold has now increased nine weeks in a row and Friday's close is a new all-time high weekly close.  However, the metal declined -2% on Friday, ending its 15-day winning streak as measured by the continuous futures contract (not the exchange-traded fund).  Perhaps the metal is finally ready to take a breather over the week(s) ahead. 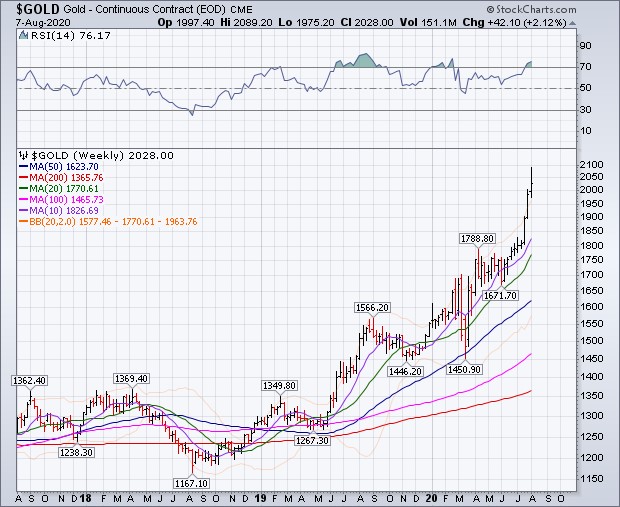 We never truly know why an asset prices the way it does, but it would stand to reason that gold's run these last three weeks has a relationship with both a collapsing United States Dollar Index (USD) and collapsing interest rates.

The USD has fallen six of the past seven weeks and traded down to levels not seen since 2018.  USD did manage to gain 0.10% this week, narrowly avoiding a seven- week losing streak.  For as "overbought" as gold is, is as "oversold" as the USD is/was on its daily chart.  Any upward reversion for USD is likely a driver of selling pressure for gold, so it's no coincidence that gold declined -2% on Friday with USD gaining 0.69%, its best day since early June.  USD has at least placed a temporary bottom on the chart below at 92.79.  It's easy to envision further USD strength over the short term, which should land USD at the ~94-96 region over the weeks ahead. 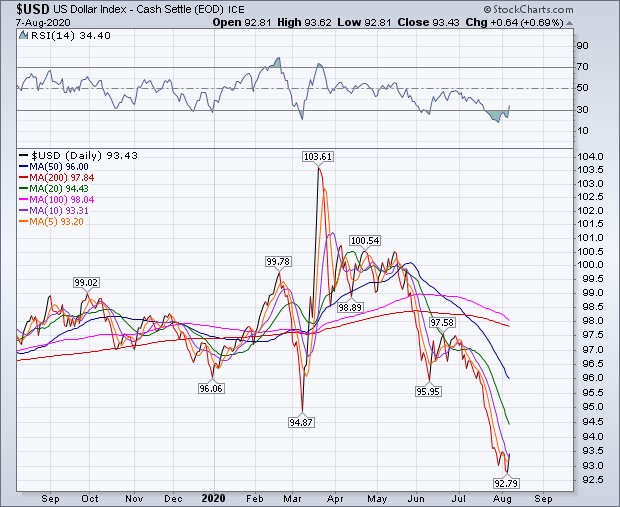 Interest rates have also been collapsing.  The yield on a 10-year United States Treasury bond (UST10y) has fallen from a June high at 0.91% to an August low of 0.52%. However, UST10y left the appearance of a "double bottom" on the chart this week, turning to the north from the 0.52% level just as it did in March when it turned to the north at the 0.54% level.  Any continued upward momentum for UST10y will also create a headwind for gold, and it's easy to envision UST10y trading into the 0.60-0.70% region over the week ahead. 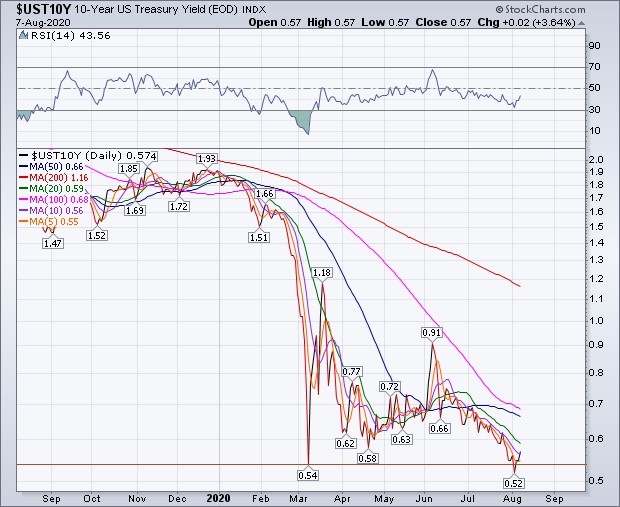 Putting it all together, it's at least easy to envision mean reversion for gold over the weeks ahead.

That said, we believe this reversal will only be temporary and interrupt the primary trends established for gold, USD, and UST10y.  In other words, we believe gold will continue to trend higher over time, even if there's short term weakness, and the USD and UST10y will continue to head lower, or at best trade sideways, over time.  Negative real rates are here to stay and will probably only worsen if the Fed, and global central banks, get their way.  And what better way for the United States to handle its debt crisis than to strive to devalue its currency?  While we're half kidding here, currency devaluation in response to a debt crisis is the oldest trick in the book.

We continue to believe that gold remains a prudent hedge and sound component of a diversified portfolio for most long-term investors.