We hope you have a wonderful Labor Day holiday weekend!

Now, it's not as if the S&P 500 truly demonstrated any material price thrust to the upside this week. Monday's high recorded at 4,537.36, and the highest price we traded up to over the remainder of the week was 4,545.85. Even though stocks went up this week, it wasn't exactly convincing. We do find this slightly disappointing and we would have much preferred a price thrust toward the ~4,600 region to illustrate growing demand for stocks. Instead, we moved a few steps higher on Monday, got back on the escalator, and then took a nice nap for the remainder of the trading week.

Given seasonality being a current headwind, we do recognize that perhaps the better way to look at this week's upside levitation is through positive lenses; we're in a seasonally unfavorable period of the year and we're not seeing any material red on the screen, not yet at least. But given September's historical precedent, it wouldn't be all that surprising if we see more red on the screen over the weeks ahead (more on this below).

Friday's jobs report was a big miss (click here), so there was a catalyst or narrative for selling pressure on Friday. Instead, the S&P 500 climbed from a Friday low of 4,521.30 to a high of 4,541.45. It reminds us of what we wrote in early August: There's still a sellers' strike across the collective actions of market participants, at least for now. 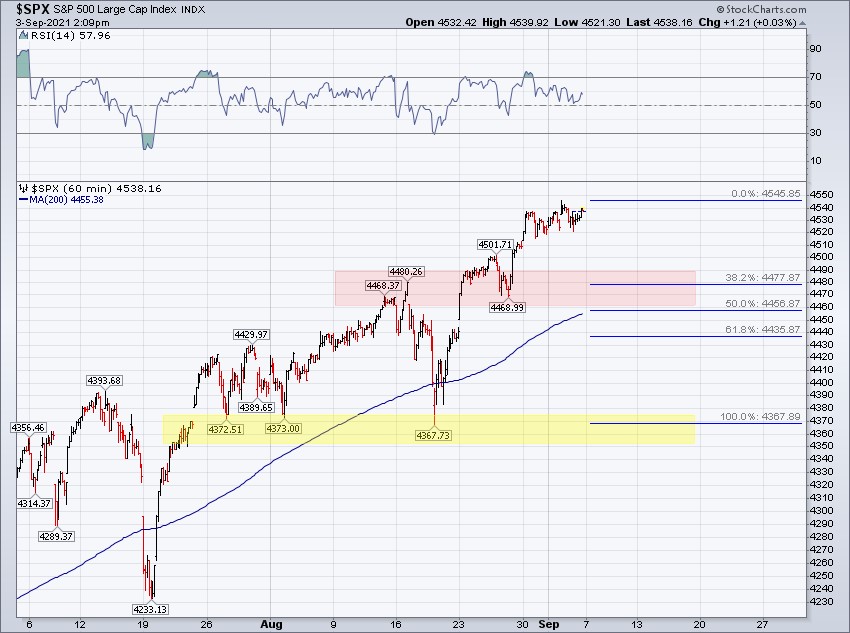 Market internals were a mixed bag this week. The on-again, off-again nature of the "re-opening trade" was on full display.

The energy sector declined -1.40%, financials fell -2.38%, and materials lost -0.67%. Meanwhile, the technology sector gained 0.86% and communication services gained 0.89%. Defensive sectors definitely caught a bid this week with the health care, consumer staples and utilities sectors all returning more than 1% for the week, more than two times the return of the S&P 500.

As of now, we do continue to believe the "re-opening trade" will take the baton and run for the S&P 500 during the fourth quarter, implying we'll see a nice "catch-up" trade to finish off the year.

Our proxy for measuring this is the ratio chart of the S&P 500 equal weight index (SPXEW) compared to the traditional market capitalization weighted S&P 500 (SPX). The "re-opening trade" has lagged meaningfully the last six months after failing at the "granddaddy of them all", the 200-week simple moving average (red circle). But recent weakness looks corrective, or temporary, given the price thrust higher we witnessed off 2020's bottom (yellow rectangle). 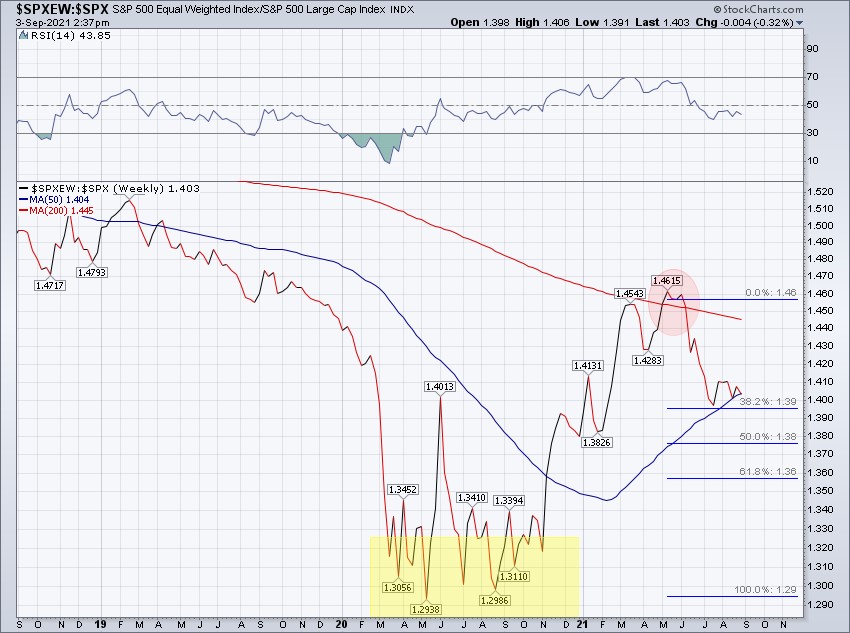 Additionally, when analyzing the ratio chart of the S&P 500 technology sector compared to SPX, we can observe this ratio rapidly approaching "resistance" at the 0.61 threshold. Each of the last two times this ratio reached the 0.61 level, the "re-opening trade" took off like a rocket ship (notice how peaks on the chart below correspond to troughs on the chart above). 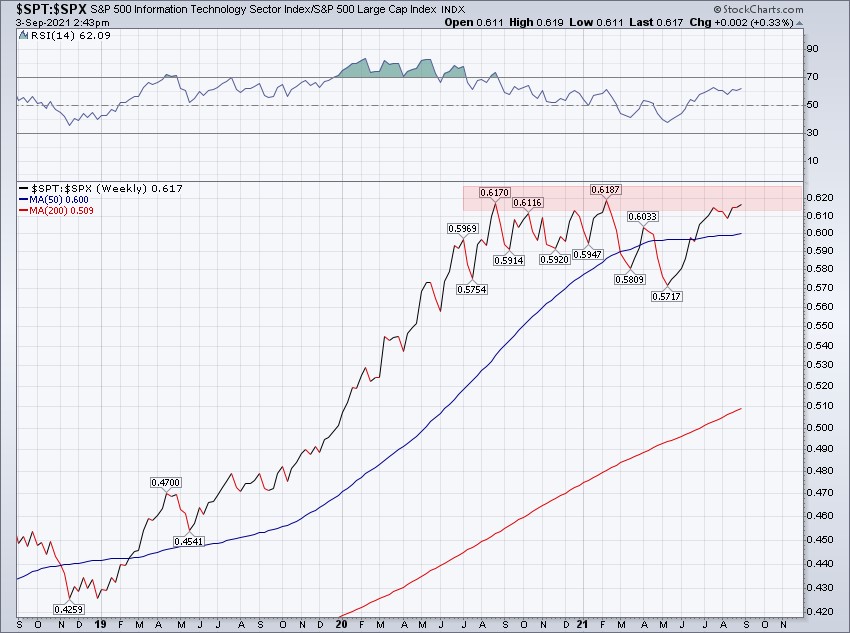 Collectively, our work leads us to believe that the ingredients are there for relative strength out of the "re-opening trade", and relative weakness out of the technology sector. Rotation is healthy, and rotation is the key to driving the S&P 500 materially higher from Friday's close, at least in our opinion.

It probably goes without saying, but for the week ahead we'd like to see some...rotation!

Our work continues to define the primary trend for the S&P 500 as up or "bullish".

The index put the finishing touches on the month of August on Tuesday, completing a stellar month and gaining 2.90%. If you're wondering why Mr. Portnoy's "stocks only go up" meme has gained so much popularity, consider the following streaks the S&P 500 put in the books as of August's monthly close:

The above list epitomizes the idea that "stocks only go up" because, well, stocks have only gone up for 10 months in a row now. 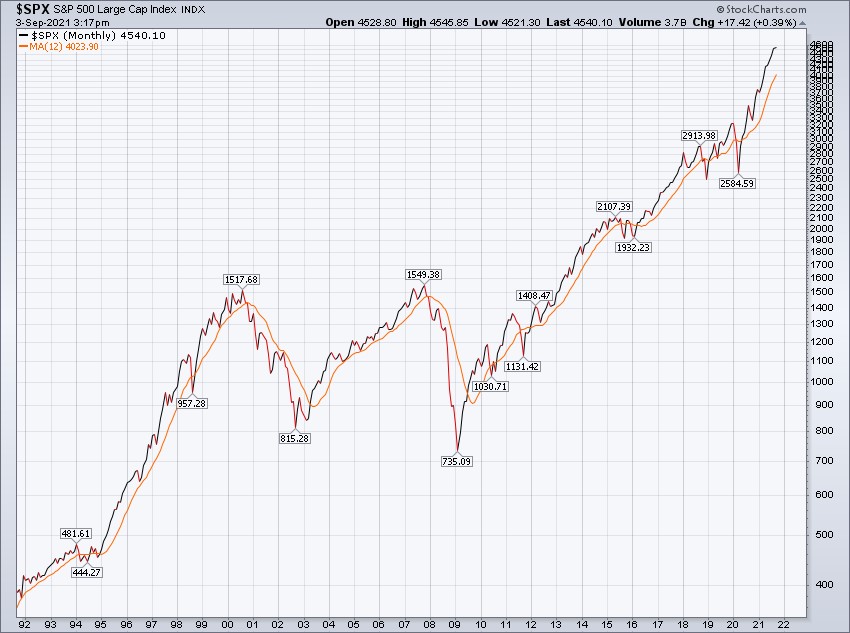 Naturally, we know what you're thinking - we're only human so we think it too.

But to that we say, "au contraire mon frère" (click here).

The S&P 500 has recorded 7 consecutive months with new all-time high monthly closing price just three prior times since 1960 (Oct 2017, May 1996, June 1964) and in all three instances the index traded up by 10% or more at some point during the subsequent 12 months. It continued.

Again, this is the view from the rearview mirror, not the windshield. The past alone can't possibly be used to consistently predict the future, otherwise we'd be billionaires at this point.

That said, the past can be used to dispel a bearish or negative bias about the future.

So, the next time you hear your friend tell you that "this can't continue", or that "stocks are going to crash!", respond to them with "au contraire mon frère" and forward them this Weekly Market Update.

Bond Market State Of the Union

The Vanguard Total Bond Market ETF (ticker symbol BND) has had a wild first eight months of 2021. BND started off the year plunging, declining -4.05% into March's low at $83.51. But BND has come back the last six months, cutting its year-to-date losses to just -0.87%.

BND is now moving face-to-face with resistance at the ~$86.50-$87.50 region. A breakout to the north to new all-time highs for BND is truly difficult for us to fathom, especially when considering the Federal Reserve's "inflate or die" policy stance. Markets do trade beyond the limits of imagination, and we've seen plenty of unimaginable things unfold over the last few years, but a new all-time high for BND here in 2021 might top the list should it occur. In our view, the two most probable scenarios, forward-looking, are either BND trading sideways or declining in price. Neither of those scenarios are all that friendly to BND investors. 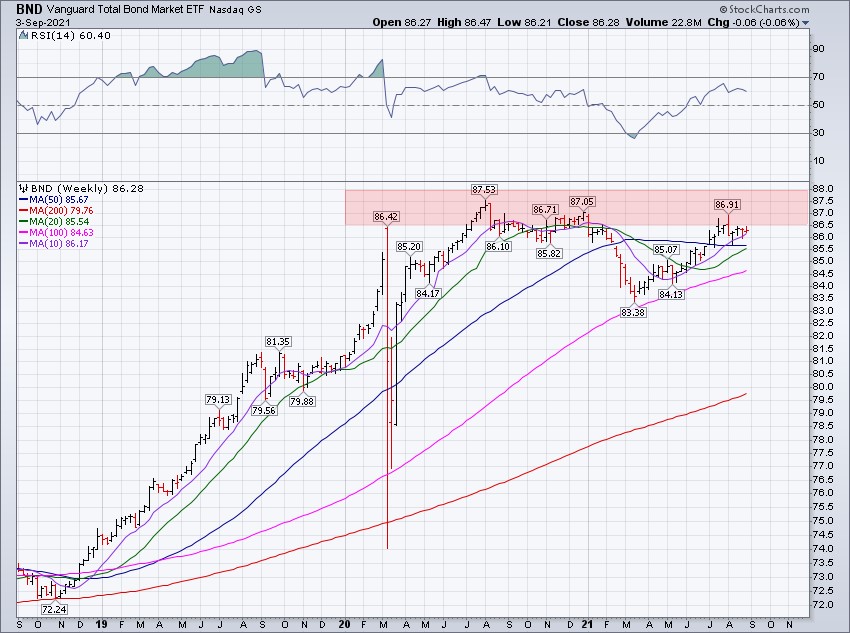 To say the bond market is hated at the present moment is probably an understatement, which is ironic given its performance the last few months. The talk of rising interest rates was all the rage in March, yet somehow the idea of "rising interest rates" has completely vanished from the talking heads as of today.

We have historically low interest rates, the yield curve is flat as a pancake, and we all have ascending inflation expectations forward-looking. Current inflation might absolutely prove to be transitory, but we firmly believe annualized inflation will sustain a notch higher than it has for most of the past decade. These two viewpoints are not mutually exclusive. With the yield on a 10-year Treasury bond closing Friday at 1.33%, we can't see why any retail long-term investor would be eager to own a 10-year Treasury bond. We truly have no idea why anyone would own BND from present levels, hence why "the bond market is dead" is a popular narrative.

The issue here is that bond prices are expected to fall, forward-looking, in both nominal and real terms. In the event this is truly what transpires with BND failing once again in the ~$86.50-$87.50 range, then investments like BND are destined to decline in value. Nobody wants to plan in the present to own investments that are destined to decline in value into the future. This begs the question, what are the areas of the bond market that are positioned to thrive, relatively speaking, in the event bond prices do actually fall into the future?

There are a variety of answers here, but two of our favorites are Treasury Inflation Protected Securities (TIPS) and interest rate hedged bond index funds.

TIPS provide a direct hedge against inflation and since ascending inflation is often a driver of falling bond prices, TIPS provide long-term investors the ability to still have exposure to the bond asset class while minimizing the risks of owning BND with historically low interest rates, a flat as a pancake yield curve, and ascending inflation expectations. Over the trailing one year, TIPS have gained 5.51% while BND has declined -0.67%. 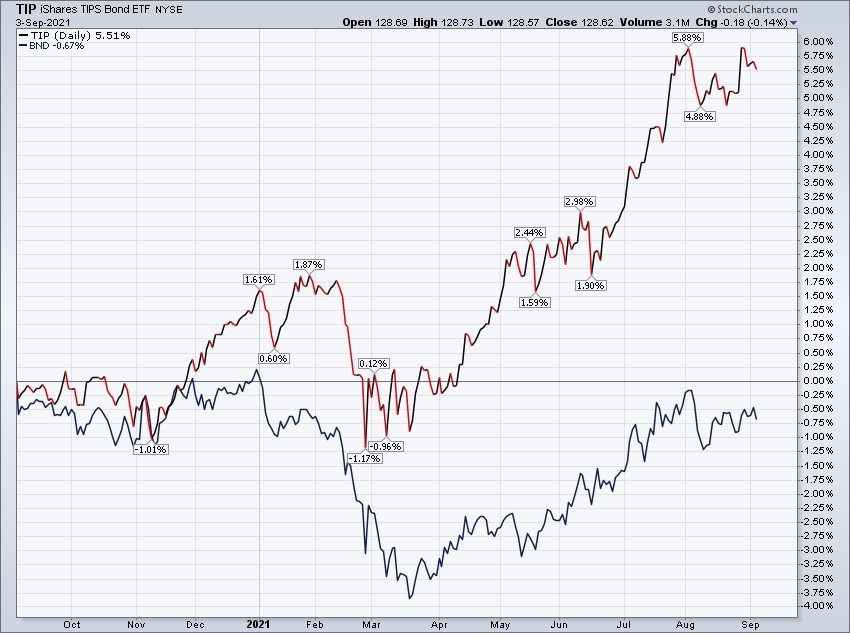 In the event Treasury bond prices fall, interest rate hedged bond index funds can be a lucrative way to own bonds. Take the performance of the iShares Interest Rate Hedged Corporate Bond index fund (ticker symbol LQDH) over the last one year as an example. LQDH is higher by 6.30% the trailing one year, trouncing the returns of BND over the same time period. 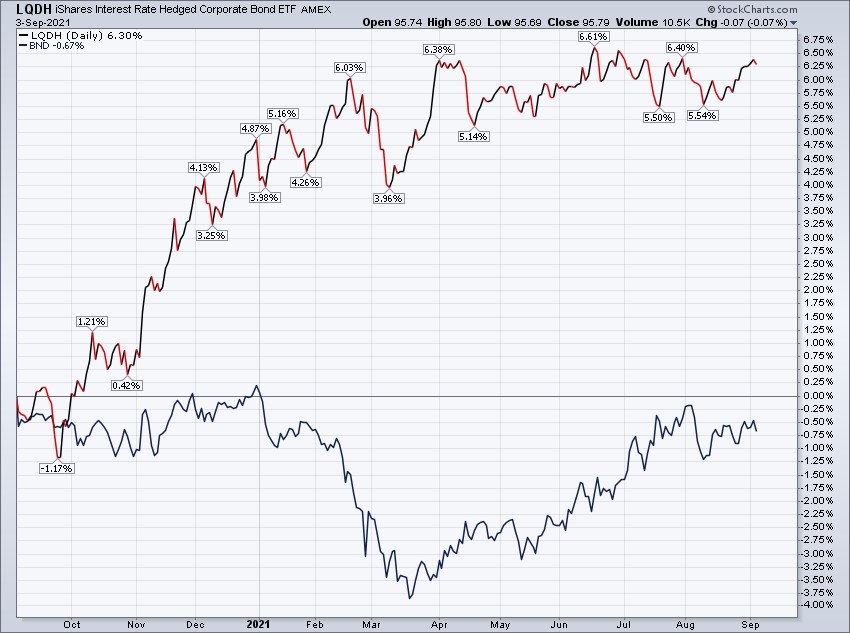 Long-term investors can absolutely still thrive with 40% of their portfolio allocated toward "bonds", you don't need all those fancy, opaque and expensive "alternative" investments. You just have to own the right types of bonds and be willing to tactically adjust your exposure when the prevailing winds change course...the same thing you have to do with stocks!