However, Thursday's session went on to finish at 3,785.38, a move higher by 1.25% from the low of the day into the close, a sign of participants "buying the dip". Friday's session then saw the index trade back down to 3,752.10, a shade above Thursday's low, but participants once again bought the dip with the S&P 500 climbing 1.95% into Friday's close. Friday's price action turned what was nearly a -1% daily decline in the morning into a 1% daily advance by the afternoon.

So, we have participants "selling the rip" and "buying the dip" over the last five days. This is the market doing what it does best...maximizing uncertainty.

The combination of "selling the rip" and "buying the dip" is how trading ranges form, so it's no surprise that we have the emergence of a trading range for the S&P 500.

Participants sold the rip at ~3,945 this week, which now becomes "resistance" (red shaded region). June's bottom at ~3,636 remains "support" (yellow shaded region). This forms a trading range between ~3,945 and ~3,636. If you follow our work then you know how we feel about trading ranges...they're the worst. 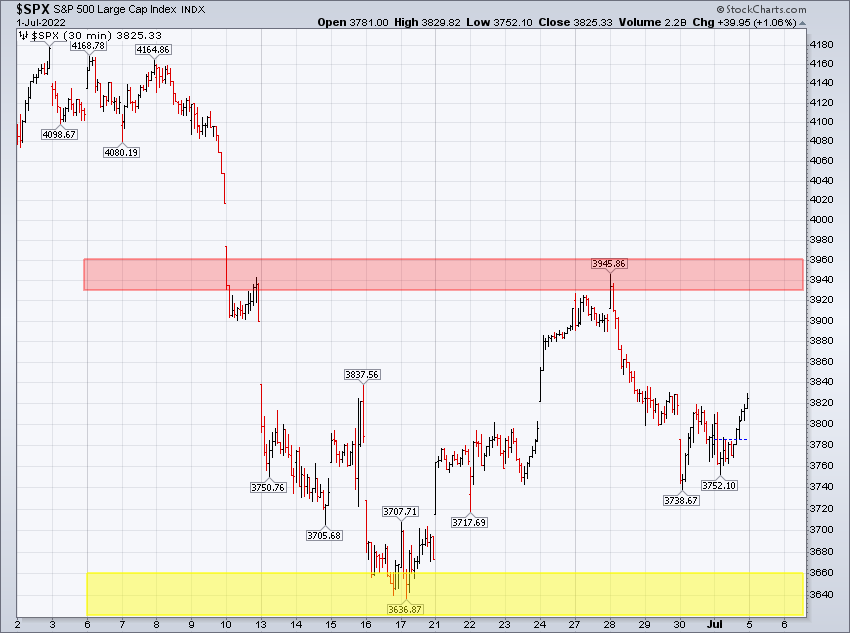 Tuesday's downside reversal also originated from a retest of the 20-day simple moving average (20MA, blue line on the chart below).

While there's always a moving average somewhere, it appears that the 20MA brought eager selling pressure into the marketplace. This is not the type of follow-through we wanted to see this past week, and the price action following last week's 6%+ weekly gainer is off to a worse start than each of the other two 6%+ weekly gainers (neither of those lost -2% the very next week). The S&P 500 hasn't had consecutive positive weekly closes since the first week of April, but hey...Friday's upside reversal did leave some optimism in the air. 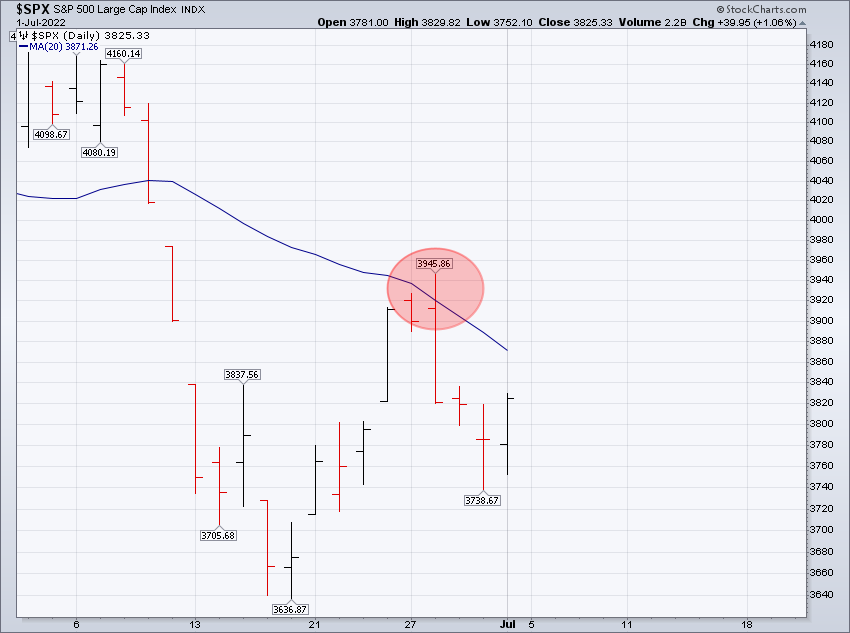 From a fundamental perspective, we thought Thursday's inflation data (click here) would take center stage this week but it was trumped by the Atlanta Fed whose GDPNow model essentially painted a picture of the U.S. economy already being in recession (click here). Fed chair Jerome Powell also reiterated that the Fed's current policy stance is a singular focus on price stability (click here), as if the Fed only has a single mandate. This implies that the "Fed put" is on vacation, and that the yield curve is susceptible to the "bond vigilantes", neither of which are an ideal backdrop for risk assets.

This is why the "peak inflation" narrative is a case of "be careful what you wish for".

The Fed will likely claim victory over inflation and talk triumphantly, but the cost of beating inflation is recession. It's like the great quote:

"Risk cannot be created or destroyed. It can only be transformed from one form of risk to another."

The Fed policy pivot in 2022 transformed the risk of runaway inflation into the risk of recession. This is why market participants, collectively, continue to price assets as if inflation has peaked and a disinflationary (or even deflationary) regime is in our future (i.e., the rate of annualized inflation will slow, or even move negative, moving forward). This is a fancy way of saying it is highly likely that a recession is upon us.

The chart below is from data at FinViz and it itemizes out the performance of a variety of commodities futures over the last few months, from energy to soft commodities to precious metal to grains. We can observe a sort of topping pattern, or downside reversal, in all of these charts. This is why the S&P GSCI Commodity Index (GTX) we discussed in last week's Update remains in free fall (it fell another -2.06% this week). 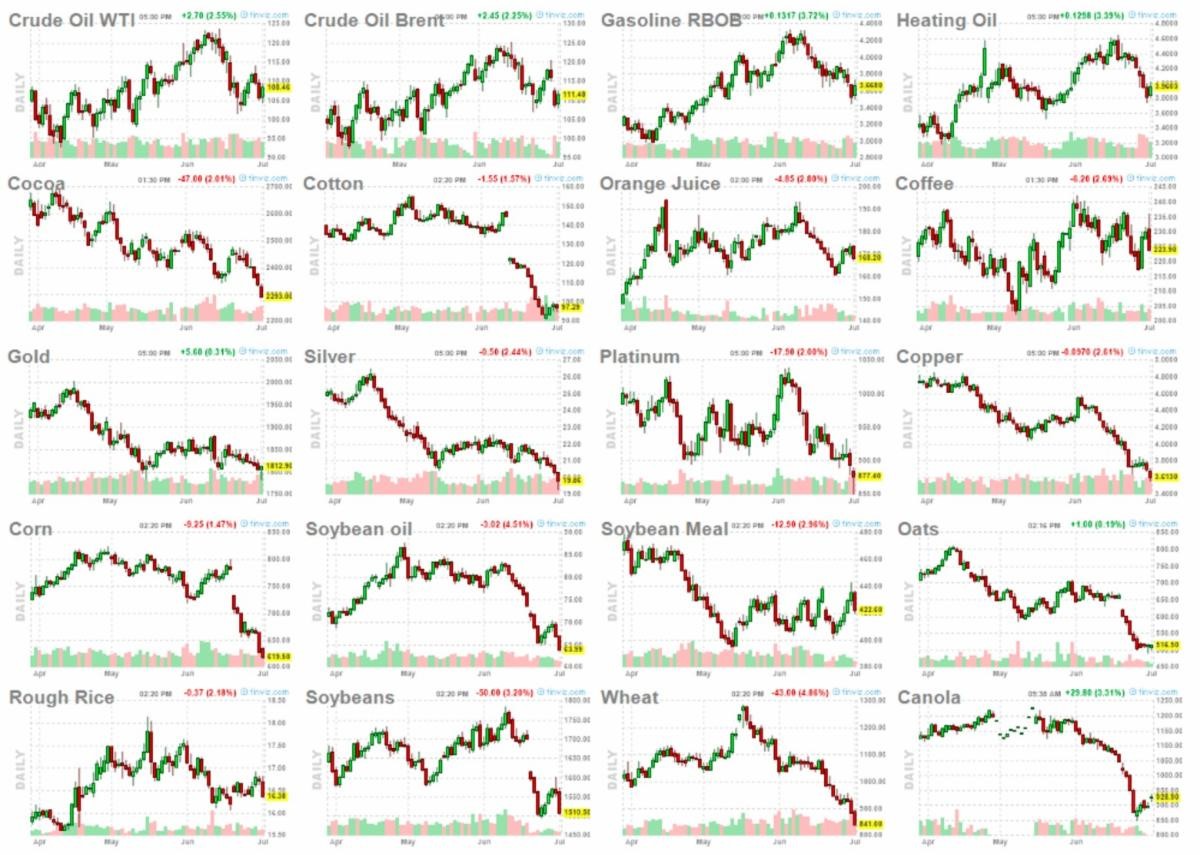 If the directional bias in the price of the S&P 500 today is a reflection of the collective expectations for the economic activity of tomorrow, then this week's data would seem to rationalize "why" the S&P 500 is in a downtrend across any and all time frames. The future is not expected to be as bright as the present, not yet at least (6-12 month time horizon). The question is just how much future damage has been priced into the current price of the S&P 500. That's unknowable, but the bottom arrives when the worst the future has to offer is fully priced in. We don't think we're there yet.  (June probably left us "a" bottom, but we don't believe it left us "thee" bottom.)

Switching gears, sector performance this week was decidedly defensive too.

Utilities gained 4.12%, consumer staples added 0.51%, and health care was up 0.37%. Utilities, perceived to be one of the top performing sectors during "bear markets" for the S&P 500, have gained a whopping 11.66% over the last two weeks. Consumer staples are now outpacing consumer discretionary stocks by more than 30% over the last twelve months, and that can only be interpreted as recessionary. Energy got back to its winning ways this week by gaining 1.38%, but the sector was up as much as 7.54% during the week so it clearly isn't out of the woods just yet.

Technology and consumer discretionary stocks, the two biggest individual sectors within the S&P 500, were the two laggards this week with technology falling -4.53% and consumer discretionary losing -4.75%. Semiconductors also got obliterated this week, falling -9.33% and closing decidedly below June's low. These areas have to be far better for the S&P 500 to find a truly lasting bottom. Without their participation, every rally should be presumed to be nothing more than a "bear market rally".

While the tone of this Weekly Market Update isn't all that optimistic, we do continue to believe the S&P 500 will somehow trade back toward its 100-day simple moving average here in July. Perhaps we're being stubborn and our opinion reflects our bias, but there is just something about how negative and sour the mood is at the moment. It's almost as if collective sentiment believes stocks can't go up, not even for a few weeks...and that's usually when they find a way to go up for a few weeks. Fingers crossed. 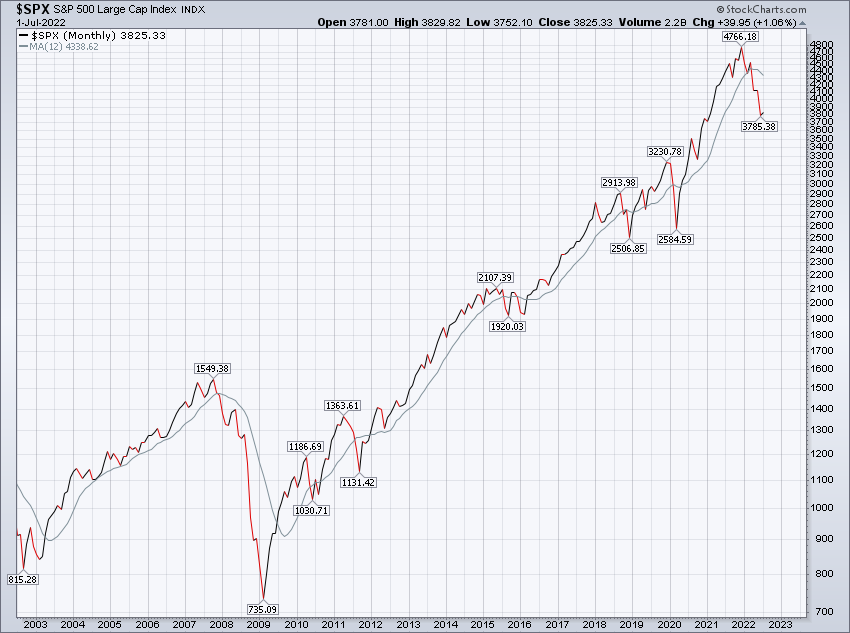 Naturally, our work continues to label the primary trend as down, or "bearish".

During downtrends, we believe long-term investors should invest more conservatively by implementing and maintaining an equity underweight across their asset allocation and relying on more active investing strategies. This is the opposite of what works during primary uptrends, or "bull markets", where an equity overweight and passive investing strategies dominate in terms of performance.

What worked best in 2021 isn't working best in 2022, and that illustrates the value in having strategy diversification and ensuring tactical asset allocation is a part of your equation. Generally speaking, an equity underweight here in 2022 could be a derivative of tactical asset allocation strategies having rotated toward "risk-off", and this was done well in advance of June's monthly decline.

Quantitatively, there are a bevy of studies we found interesting into June's monthly close. As always, the price action of the past can't be used to consistently predict the price action of the future, but that doesn't mean there isn't usefulness in knowing how the S&P 500 traded following similar downdrafts like the one we've seen here in 2022.

First, the S&P 500 finished the month of June with trailing 12-month returns of -10% or less. We're calculating this using monthly closing prices and this is the worst rolling 12-month decline the index has recorded since June of 2008. In terms of what was ahead, that's not a great month to circle back to.

Each of the last two instances saw the index get obliterated, forward-looking.

On the flip side, we also have the S&P 500 falling by -20% or more over a 6-month period. That has only happened six prior times since 1950, with the last instance being October of 2008. That's also not a great month to circle back to.

The index has closed higher one year later in all six instances, with only one of them being lower than a gain of 18.84%. Four of six instances also marked *the* bottom, or the lowest monthly close for the S&P 500 at any point over the forward 12 months following the six-month, -20% decline.

Putting it together, we find that studying history helps us reinforce a dispassionate approach toward what lies ahead.

In order for long-term investors (or even investment managers) to stay unbiased in ongoing portfolio management decisions, they have to have conviction in the idea that they have absolutely no clue what lies ahead. The minute that changes is the minute it becomes exponentially more difficult to invest as it's likely that emotion, opinion, bias and speculation will enter into the ongoing portfolio management decision-making process. We're all probably guilty of allowing our bias to influence an investment decision at one point or another, and if we're all being fair we all probably have some regret associated with those decisions.

Take the climate right now as an example: We imagine it would be a pretty easy decision for someone to liquidate risk assets in the entirety into any material climb for the S&P 500 over the weeks ahead. Why? Because it's pretty easy to have conviction in the "bearish" narrative at the moment and it's always easy to replace "risky" money with 'safe" money (i.e., sell "risky" stocks and retain the proceeds in "safe" cash). But would this be the best decision for an investor to make? Not in our opinion, results be darned.

In the world of investing, it's process over everything. All we can control is what we invest in and when we invest in it.

If those decisions aren't governed by rules, with a completely dispassionate approach to the outcome, then your probability of investing with success over the long term is low (in our opinion, of course).

Like they teach us in kindergarten, when you follow the rules you stay out of trouble. It's no more applicable than in the world of investing, and knowing our history helps us follow the rules.