The index traded quietly all week, floating its way up to 3,823.60 on Thursday and flirting with new all-time highs. But we then reversed lower into Thursday's close and declined an additional -0.72% on Friday to finish the week in negative territory. All in all, this week recorded as an "inside week", that is a calendar week with a lower high and a higher low than the prior trading week.

"Inside weeks" stand for hesitation or indecision across the collective actions of market participants, and they're often challenging to forecast. Take Friday's price action as an example: The positive was that we saw support at and around the 20-day simple moving average (solid green line), an area of support each of the last four times we visited it over the trailing one month (blue arrows). The negative is that we're off -1.44% from Thursday's high and we set our weekly low on Friday, creating negative momentum as we head into next week. 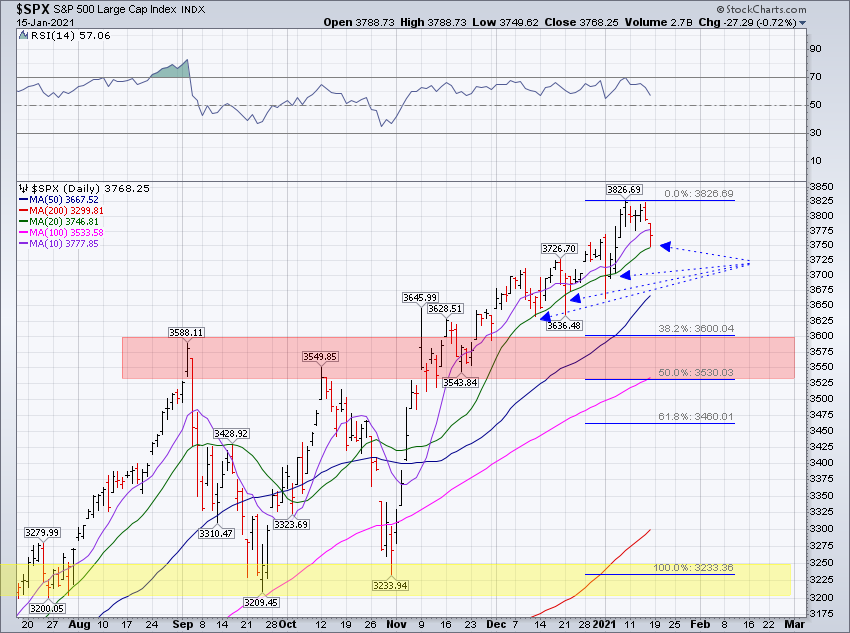 While the S&P 500 struggled this week, small-cap stocks did not.

The iShares Russell 2000 index (ticker symbol IWM) gained 1.46%, even with Friday's -1.49% decline. IWM has now increased 1% or more ten of the last eleven weeks (!) while gaining 38.09% over that time span. Participants have bought into the idea of an economic bonanza here in 2021, the likes of which small-cap stocks will be the primary beneficiary of. President-elect Biden revealed his stimulus plan this week (click here) and the general consensus is that it's expected to be small cap friendly.

The primary trend is up for IWM, but it's long overdue for some sort of retracement. A move back toward the $170-$180 region at some point over the coming quarter would be rather normal, even though it would feel anything but normal. 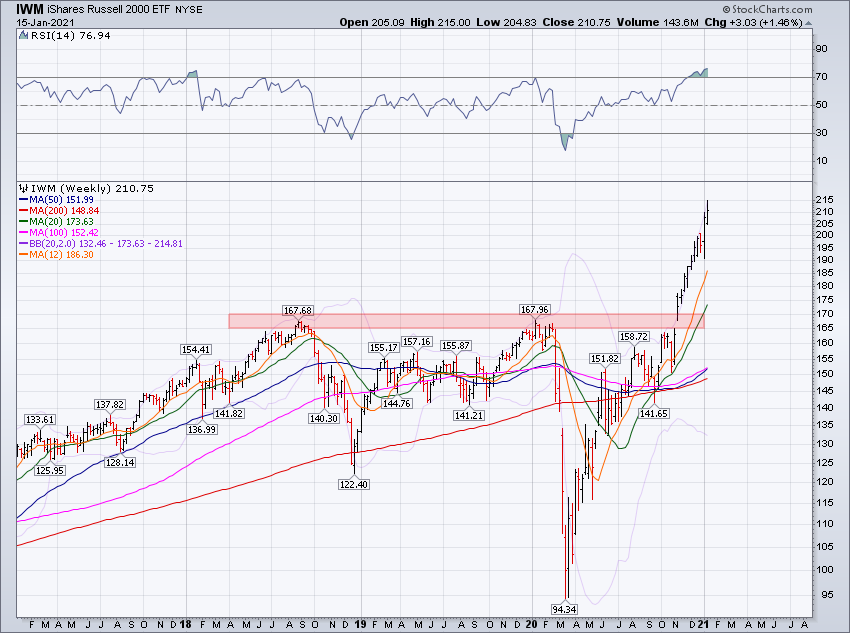 That was the case this week with the S&P 500 energy, utilities, and real estate sectors all gaining 1% or more this week. Technology (what we often call the Lebron James of the market) was one of the biggest losers this week, falling -2.62%. The bifurcation of COVID continues to manifest itself in somewhat of an all or nothing aspect to internal market behavior. Either technology does well and everything else lags, or everything else does well and technology lags. Given the uncertainty surrounding COVID in the back half of 2021, this is why we value a diversified "barbell" approach toward equity ownership at the moment.

The ratio of SPXEW to SPX is at its highest level since early 2020, a sign that the actions market participants are taking in the present are under the expectation of an ascending return to "normal" into the future. Whether those expectations are correct is the trillion-dollar question. 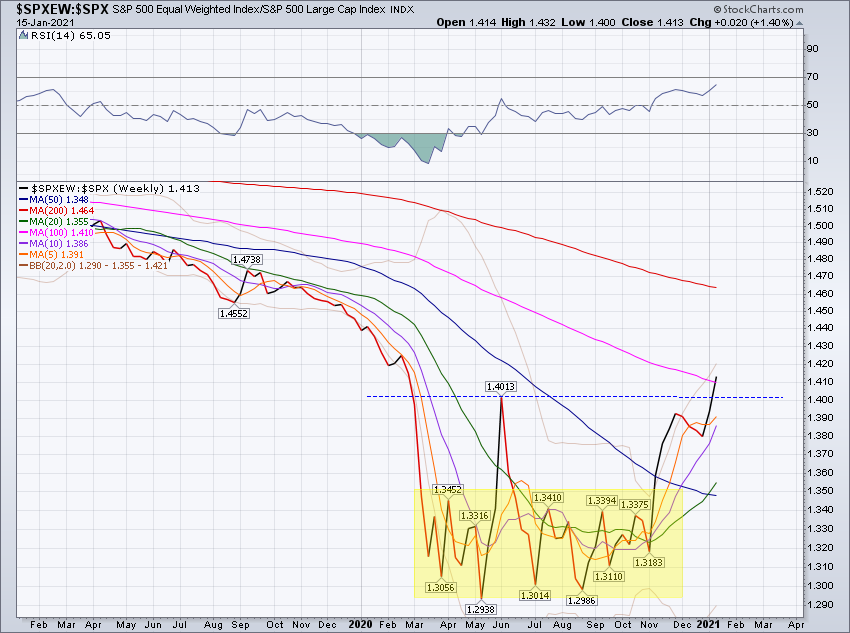 The former will see the S&P 500 remain resilient by shrugging off this week's decline and head back toward all-time highs. The latter will see this week's decline accelerate and leave us testing a confluence of support around the mid-3,600s, which has been meaningful support throughout December and January, and the ascending 50-day simple moving average at ~3,667.52. We think the odds slightly favor the market showing resilience and heading back toward all-time highs over the week ahead.

During uptrends, long-term investors are generally best served with an equity overweight across their portfolios' asset allocation and relying mostly on passive investing methodologies.

Primary uptrends are a time to strive to "be right and sit tight". There will be a time to throw in the towel to live to fight another day (i.e., a time where long-term investors are better served investing more conservatively), but there's no evidence on the charts that this time is now. If the trend is your friend until it begins to bend, then the trend is still our friend since there are no signs of bending...anywhere. 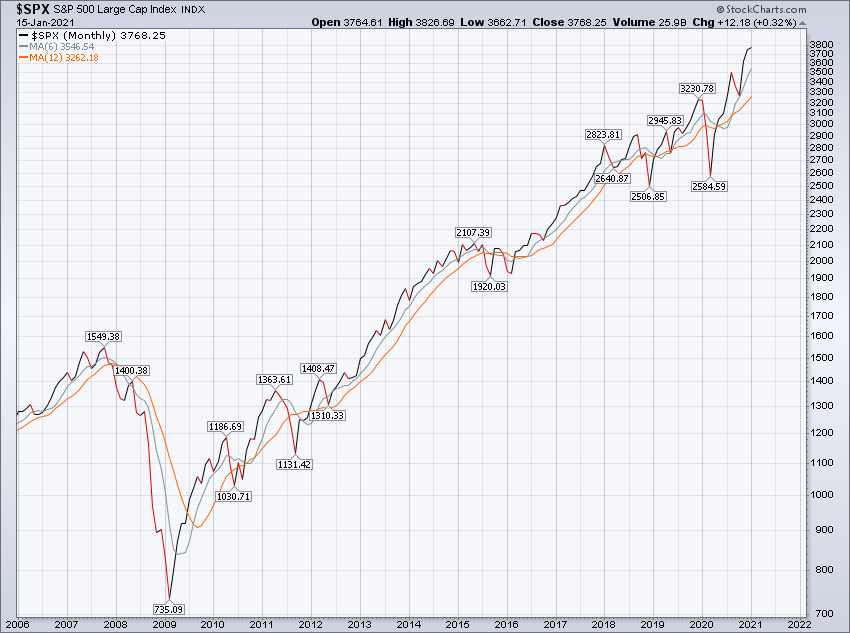 There are a host of narratives about why the S&P 500 is doing so well, and one that seems to have persisted over the years is our good friend "TINA".

TINA is an acronym for the phrase "There Is No Alternative" and it speaks to the idea that investing in equities is the lone legitimate option for the investing community at the present moment.

With the federal funds target rate anchored to 0%, the Federal Reserve pursuing "inflate or die" policy actions and the yield on a 10-year United States Treasury bond closing Friday at 1.11%, the cash asset class pays next to nothing and the fixed income (bonds) asset class offers an incredibly high probability of negative real returns over time. While cash and fixed income can and do still play a role in portfolio construction (i.e., there is nothing that guarantees their forward returns to be worse than that of the equity markets) it's sensible that market participants would be far more eager to own stocks over bonds at the present moment. And an eager bid to own stocks tends to keep their primary trend as up or "bullish". 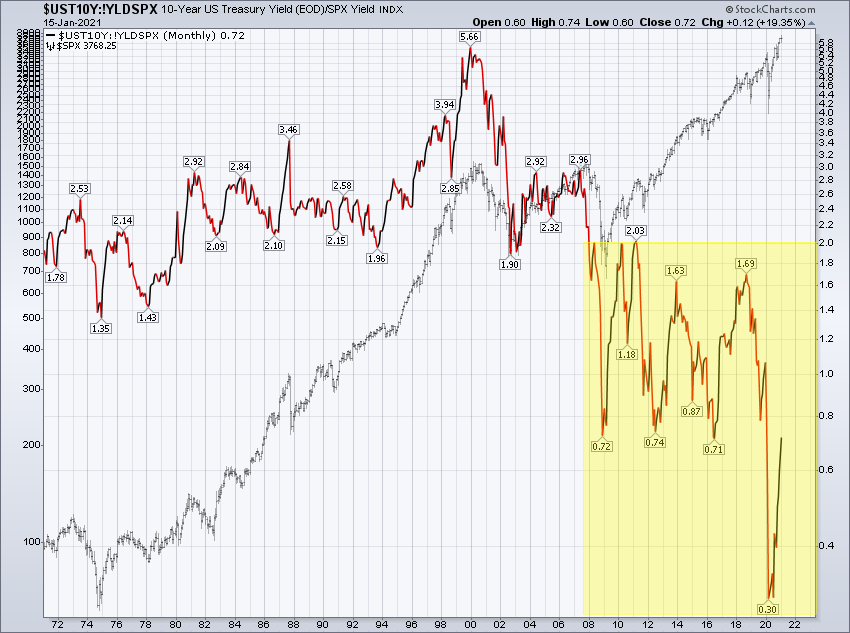 Thinking about the next 12 years, we all know that the Fed has pledged to keep interest rates low for the foreseeable future, and we know that the Fed has stated they want sustained higher inflation, and we know that the federal government is embracing elements of modern monetary theory (even if unknowingly) by spending a few trillion here and a few trillion there. So it's virtually impossible to believe a 10-year Treasury bond's 1.11% over the next decade is going to outpace the S&P 500's total return over the next decade. Think about it: which asset would you choose to own for the next decade, a 10-Year Treasury bond that will pay you 1.11% in nominal return or the S&P 500 where you can can potentially collect greater annual income and upside capture in the event stocks do rise? Seems like a no-brainer to us.

Now, it's fair to point out that the S&P 500 has produced negative nominal returns over a 10-year period before, and it's in that scenario where making 1.11% the next decade is relatively attractive. However, part of why we saw lost decades over the 2000-2009 and the 1973-1982 periods was because there was a 3x and 6x multiple of income investors could receive from buying a 10-year United States Treasury bond instead of collecting the dividends the S&P 500 was offering. It was easy for an investor to say "I'll sell my stocks and go make good money in Treasury bonds". Meanwhile, that ratio presently stands at 0.72, not even in the same continent as a 3x or 6x multiple, and the last thing most anyone wants to do is sell their stocks and buy Treasury bonds.

This is why we believe that we'll need to see a "bear market" in fixed income first, before we can see a sustained "bear market" in stocks. While it's equity market valuations that get all the attention for being "overvalued", it's the fixed income markets that are even more egregiously "overvalued" (or manipulated) in our opinion. A "bear market" in bonds will bring meaningfully higher interest rates over time, thus bringing the end of TINA. And meaningfully higher interest rates has a precedent for aligning with a lost decade for the S&P 500. See the 1962-1980 period below, which is remembered as every long-term investor's worst nightmare; decidedly negative nominal and real returns in stocks and bonds, all while the cost of living skyrocketed. 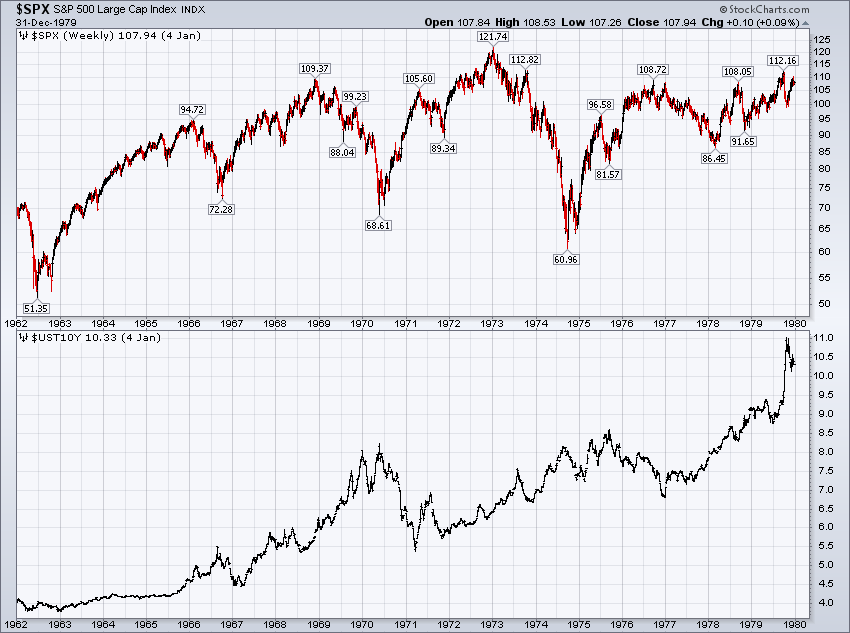 Putting it all together, TINA is alive and well at the moment. Her future is undoubtedly not as bright as her present, but the next time you feel like you should sell your stocks and duck for cover, ask yourself what are you going to invest the cash proceeds in? You'll find there simply isn't a good answer here yet, and that's partly why we believe stocks have more room to run to the upside over 2021 and beyond.

In last week's Update we noted how "overbought" Bitcoin (BTC) was and wrote "When the music stops here, the retracement is going to be spectacular to watch." It wasn't that spectacular, but BTC did fall nearly -30% in a matter of days.

Charlie Bilello from Compound Advisors shared a great table showing BTC's history of violent corrections from all-time highs. This week's violent decline is nothing new, and in a vacuum this type of volatility is difficult for most long-term investors to stomach. However, do keep in mind that risk and reward tend to be related in the world of investing. BTC's 534% return from 12/15/2018 to 11/30/2020 provided more than enough compensation for its most recent drawdown of -84% from 12/17/17 to 12/15/2018. In life, where there's the risk of a lot of pain there's generally the reward of a lot of gain. 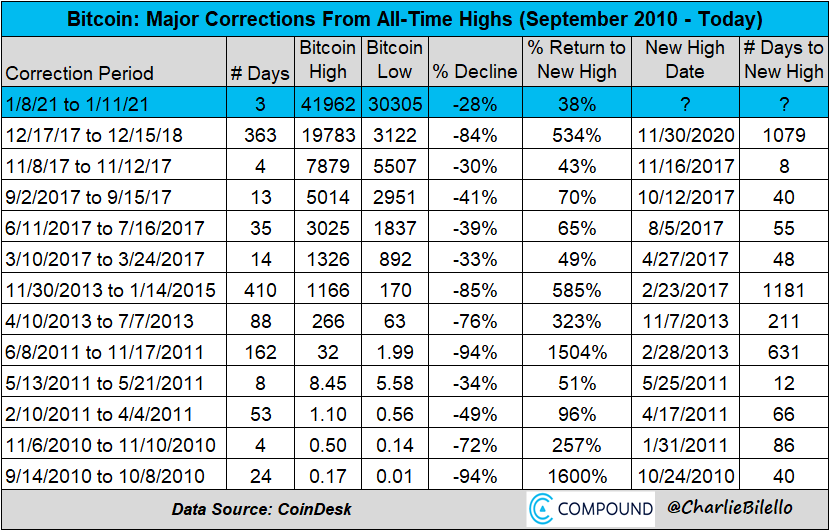 It certainly feels like BTC has stolen a lot of gold's luster as "digital gold" has trounced the actual metal the last few months. Gold declined -0.30% this week and has now fallen two weeks in a row, and three of the last four. The metal is now a textbook picture of the idea that "old resistance becomes new support". Gold's weekly chart leaves the metal retesting its prior all-time highs. As we wrote last week, it's been a frustrating six months for gold. Perhaps that's a sign that the metal is actually going to catch a bid. 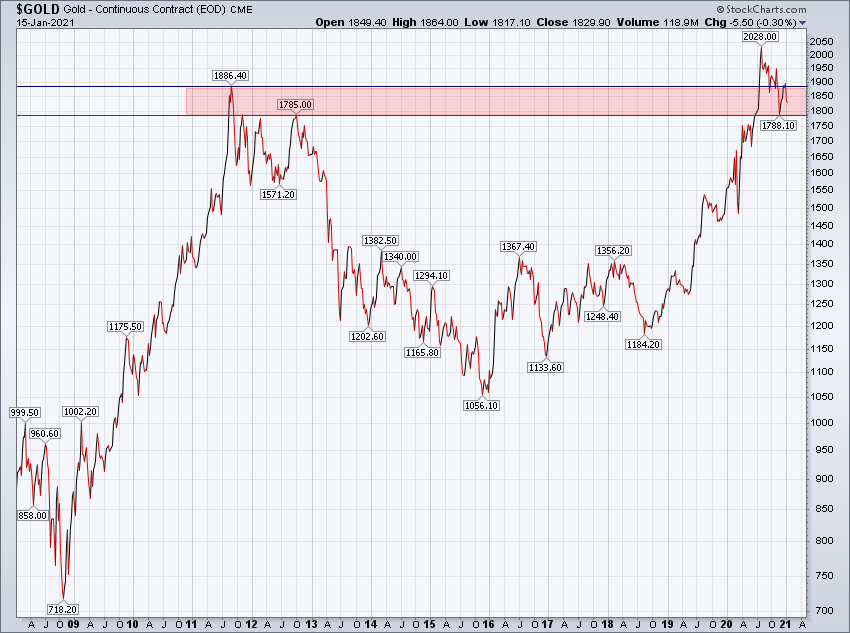 Finally, the S&P 500 Financials index (SPF) remains in position to break out here in January. Quite frankly, SPF's chart pattern is easy to fall in love with, and it resembles that of the iShares Russell 2000 index fund from a few months back. The financials have been a relatively terrible investment for a long time, but as they always say, past performance is not indicative of future results.

The contrarian in us can't help but think SPF is ripe for a huge move to the north. 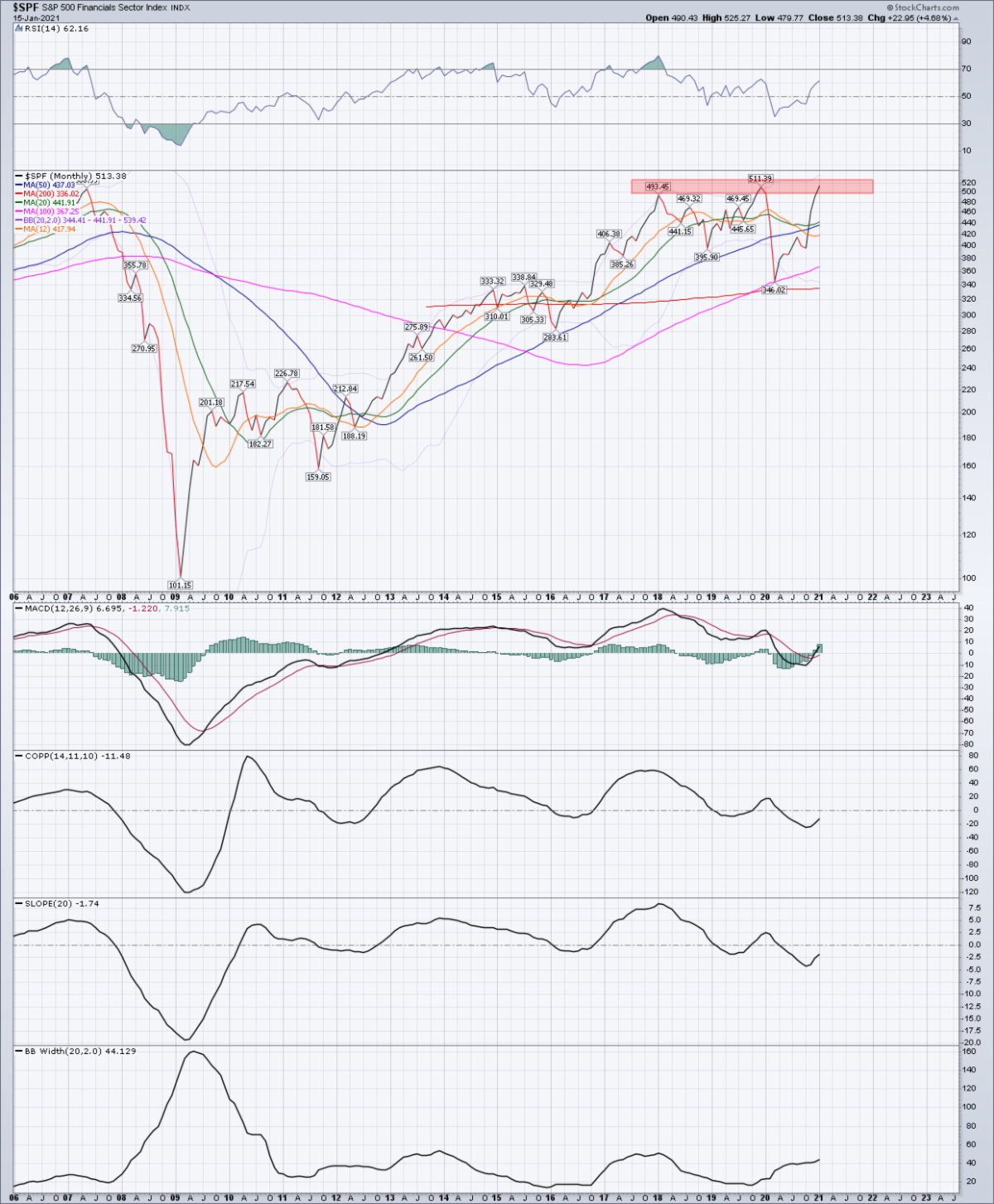